Nothing Phone 1 Get Software Update to Nothing OS 1.1.4 With Major Camera Improvements, Bug Fixes, More 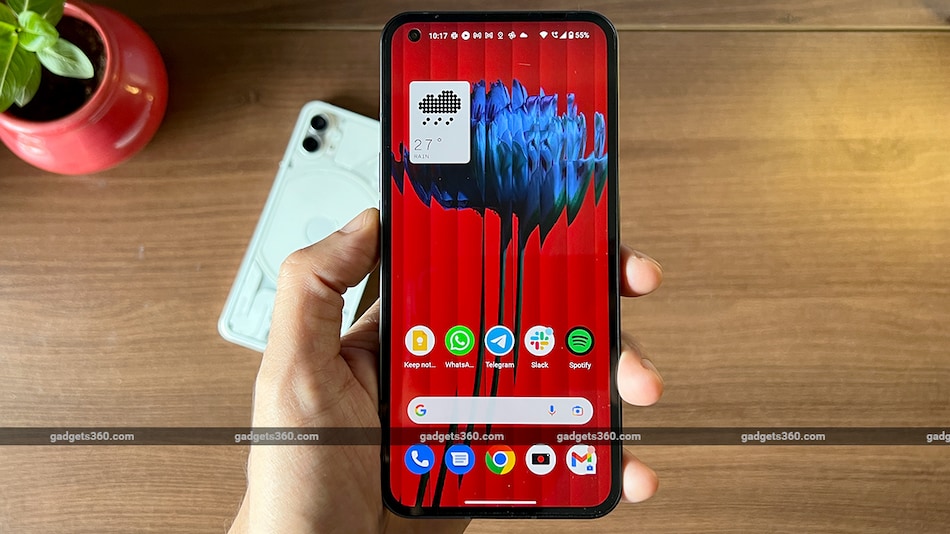 Nothing Phone 1, the first smartphone from the UK brand, led by OnePlus co-founder Carl Pei, was unveiled globally in July. Now the company has begun rolling out an update to Nothing OS 1.1.4 along with the September 2022 Android security patch for the handset. The update brings a host of camera improvements and introduces power-consumption optimisation for the Always On Display alongside bug fixes for the company's first smartphone. Updating to Nothing OS 1.1.4 will let users add a Nothing watermark to their photos and offers support for the low latency high-definition audio codec (LHDC) codec on the Nothing Phone 1.

Carl Pei announced the rollout of Nothing OS 1.1.4 for the Nothing Phone 1 via a tweet on Sunday. The new over-the-air (OTA) firmware update comes with new features, several camera improvements, bug fixes, and performance optimisations. As mentioned, the update is 136MB in size.

The camera setup of the Nothing Phone 1 appears to benefit the most from the latest Nothing OS update. Like some new Xiaomi, Realme, and Poco smartphones, the Nothing Phone 1 will now let users add a watermark to their photos. The update adds improvements to the ultra-wide camera's colour calibration, while improving colour consistency between the main and ultra-wide sensors. It also introduces a new motion detection algorithm that offers better stabilisation while capturing moving subjects. As per the changelog, Nothing has also increased the shooting speed of the ultra-wide camera in HDR mode.

With the update to Nothing OS 1.1.4, the company has integrated the latest features from the Nothing Ear 1 app into Nothing OS. This will let users switch between noise cancellation modes and modify gesture controls right from the quick settings panel and the settings section. The update improves the navigation accessibility on the phone by adding an option to flip the 3-button navigation bar. It also brings support for the LHDC audio codec.

According to Nothing's changelog, the update includes the September 2022 Android security patches. It also optimises the Always On Display feature to increase the battery life of the handset. As per the changelog, it adds a new UI for system updates and provides improved thermal performance, along with an improved face unlock algorithm.

Apart from the general bug fixes, the Nothing OS version 1.1.4 fixes network issues occurring with certain carriers. It also addresses issues that displayed incoming calls as coming from an unknown contact and a fingerprint issue with the HDFC Bank app.

The Nothing Phone 1 (Review) was unveiled in July with a starting price tag of Rs. 32,999 for the base 8GB RAM + 128GB storage variant. The company hiked the price of the handset by Rs. 1,000, across all price variants, in August.

Specifications of the Nothing Phone 1 include a 120Hz refresh rate display, a 50-megapixel dual-camera setup along with a 16-megapixel selfie sensor, and up to 256GB UFS 3.1 inbuilt storage. The handset is powered by Qualcomm's Snapdragon 778G+ SoC paired with up to 12GB of LPDDR5 RAM. The Nothing Phone 1 packs a 4,500mAh battery with support for 33W wired charging, 15W Qi wireless charging, and 5W reverse charging.

Further reading: Nothing, Nothing Phone 1, Nothing OS, Carl Pei