OnePlus Nord 2T launch event is expected to take place on May 19 at 7:30pm IST. 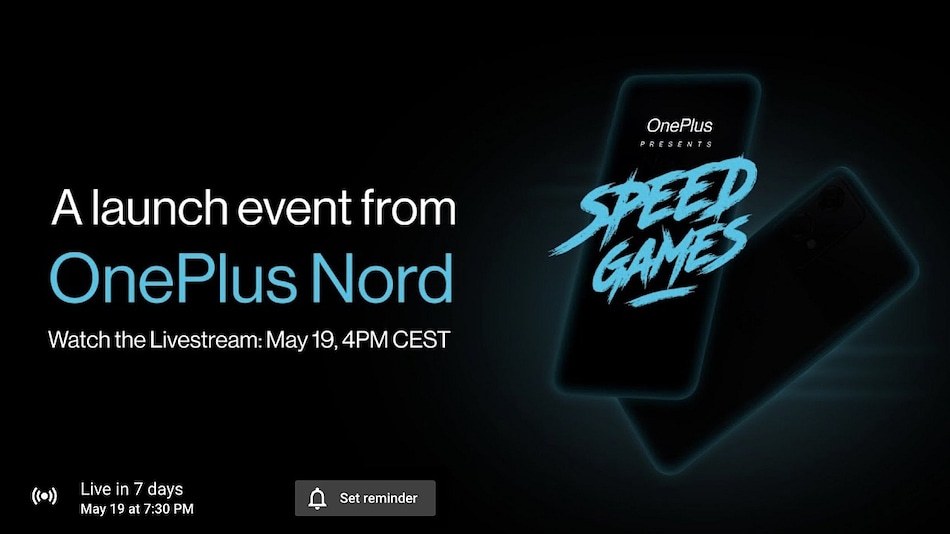 OnePlus Nord 2T launch date has reportedly been set for May 19. A week after the upcoming smartphone's specifications, design and price were leaked via an unboxing video, the company briefly listed the official launch event on its YouTube channel, as per multiple reports. The handset is expected to debut alongside the OnePlus Nord CE 2 Lite 5G and OnePlus Nord Buds in global markets — these have already been launched in India. The OnePlus Nord 2T is tipped to be powered by a MediaTek Dimensity 1300 SoC, and feature a 50-megapixel triple rear camera setup.

The company posted a video for the upcoming launch event on its YouTube channel earlier today, spotted by tipster Mukul Sharma. The video revealed that that the launch event for the OnePlus Nord 2T will be held on May 19 at 4pm CEST (7:30pm IST). The video has since been taken down, but the screenshot captured by the tipster reveals the time of the event. According to Sharma, the OnePlus Nord CE 2 Lite 5G, and OnePlus Nord Buds will also be launched in Europe during the event. OnePlus is yet to officially make an announcement regarding the launch of the OnePlus Nord 2T in India and other markets. Yet another tipster, Abhishek Yadav, also shared a similar screenshot.

OnePlus Nord 2T was recently spotted in an AliExpress listing that suggested the upcoming smartphone would come with a $399 (roughly Rs. 30,900) price tag. Meanwhile, according to tipster Abhishek Yadav, the OnePlus Nord 2T will be priced at EUR 399 (roughly Rs. 32,200). The handset was recently spotted in an unboxing video on YouTube, where the price of the OnePlus Nord 2T was shown to be Rs. 30,000 for the 12GB RAM + 256GB storage variant. The company is yet to officially announce the price of the upcoming smartphone.

According to previous reports, the OnePlus Nord 2T is tipped to run on Android 12-based OxygenOS 12.1 out of the box. The smartphone could feature a 6.43-inch full-HD+ (1,080x2,400 pixels) Fluid AMOLED display with a 90Hz refresh rate and HDR10+ support. The OnePlus Nord 2T is said to be powered by a MediaTek Dimensity 1300 SoC, paired with up to 12GB of RAM.

For photos and videos, the smartphone is tipped to feature a triple camera setup, comprised of a 50-megapixel Sony IMX766 primary camera with OIS support, an 8-megapixel ultra-wide angle camera, and a 2-megapixel tertiary camera. For selfies and video chats, the OnePlus Nord 2T is said to sport a 32-megapixel front facing camera. The OnePlus Nord 2T could offer up to 256GB of storage, according to reports. The handset is tipped to pack a 4,500mAh battery with support for 80W fast charging.