OnePlus may have added only a few upgrades to the Nord 2T 5G, but they all add up nicely. 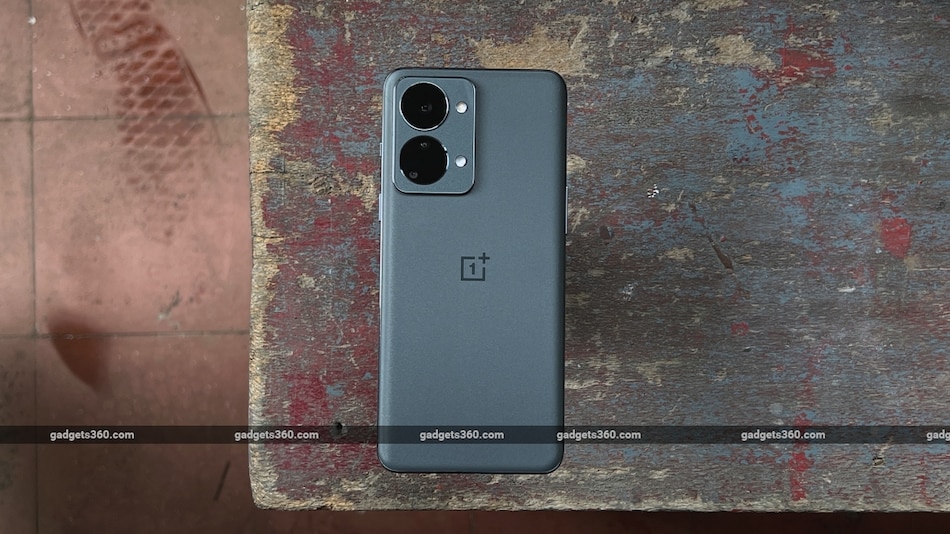 Despite just minor upgrades over the Nord 2 (Review), the new OnePlus Nord 2T 5G seems to have it all. OnePlus' first ‘T' model in the Nord series isn't a brand-new phone, but seems to get the basics right by including a proper mid-range processor, an upgraded fast-charging system, a quality display and a capable primary camera with optical image stabilisation (OIS). Indeed, it seems to have everything one could ask for at a slightly lower starting price of Rs. 28,999.

But there are competing smartphones such as the Realme 9 Pro+ 5G (Review) which offer similar hardware at an even lower price, so how does the Nord 2T 5G stack up against the competition and is it the perfect mid-ranger? I've used the smartphone for a few weeks and here's what I think about it.

The OnePlus Nord 2T 5G has not received a major design overhaul, mainly because this is just a ‘T' version of the phone, one that's expected to bring minor upgrades to the core hardware. There are some design details that have changed and that's mainly around the back. The camera module now has two large circular cutouts, one of which houses the primary camera and the second houses the ultra-wide and monochrome cameras. The layout looks neat and unique, but the module protrudes quite a bit, making the phone wobble when placed on a flat surface.

The rear panel is made of anti-glare glass and has a soft matte finish which feels quite premium and does an excellent job of resisting fingerprints. The mid-frame is made from polycarbonate and has a chrome-like finish which gathers a lot of fingerprints and smudges, but it makes the device easier to grip. The OnePlus Nord 2T 5G has a weighty, premium feel to it and I'm glad that OnePlus has retained the Alert slider on this phone after removing it from the more expensive OnePlus 10R 5G (Review).

The display has slightly curved edges and is not completely flat, which makes swiping inwards from the edges a good experience. It has a hole-punch cavity for the selfie camera in the top-right corner and an embedded fingerprint scanner of the optical variety, which works reliably. The display gets Corning's Gorilla Glass 5 protection. It gathered fingerprints easily, but these were easy to wipe off. One detail that I did not like was the thick bottom bezel of the display, which looked a bit chunky compared to the other three sides.

The OnePlus Nord 2T 5G uses a MediaTek Dimensity 1300 SoC which replaces the Dimensity 1200-AI SoC in the previous model. This is the only core upgrade you get with the ‘T' model this year, but more about this processor in the next section. The phone comes with LPDDR4X RAM and UFS 3.1 storage, and has a dual-SIM tray which supports up to two 5G nano-SIM cards, with dual-standby functionality.

Communication standards include, Wi-Fi 6, Bluetooth 5.2, NFC and support for the usual satellite navigation systems. The phone is powered by a 4,500mAh battery and can be charged using the 80W charger that comes in the box. The charging speed is another big change compared to the Nord 2, which had 65W fast charging. The Nord 2T 5G still doesn't get any IP rating for dust and water resistance, something that's getting increasingly common in the mid-range space.

The phone runs OxygenOS 12.1 which is based on Android 12. The software experience is typically OnePlus but I noticed an odd omission. The Nord 2T 5G is devoid of any live wallpapers and only comes with six static ones. There is a whole collection of static OnePlus wallpapers that can be downloaded from the Themes store, but you will have to sign up with a OnePlus Account for that. In terms of support, OnePlus claims to offer two major Android updates and three years of security updates, which is good enough for a mid-range device.

OnePlus continues its tradition of offering smartphones with minimal bloatware and the only third-party apps that comes preinstalled is Netflix. Because of this, there were no annoying notifications to deal with anywhere in the interface. As for the rest of the software, it's quite customisable. The theme engine picks colours automatically from the wallpaper and applies it to the widgets and the keyboard. Oddly, the same colour isn't applied to the system accent colour, which has to be chosen and applied manually from the personalisations menu.

The OnePlus Nord 2T 5G performed well for a mid-range smartphone in benchmark tests. The phone scored 6,15,487 points in AnTuTu and 672 and 2,614 in Geekbench's single and multi-core tests. While these scores are fine for a mid-range device, they are noticeably lower than the similarly priced iQoo Neo 6 (Review) which scored 7,29,331 points in AnTuTu and 983 and 3,074 points in Geekbench's respective tests.

Gaming performance was quite good and the phone did not get too hot while playing taxing games. I tried Call of Duty: Mobile and Asphalt 9: Legends and both games ran smoothly at their respective default settings. Maxing out the graphics settings in both games did not cause any drop in performance either. The display's 180Hz touch sampling rate seemed sufficient while playing fast-paced FPS titles.

The 6.43-inch AMOLED panel on the OnePlus Nord 2T 5G features a 90Hz refresh rate and OnePlus claims that it's HDR10+ certified. The display produced mostly saturated colours at the default Vivid colour profile. Switching to the Natural mode produced more accurate colours. The display seemed sufficiently bright outdoors but the phone's ambient light sensor always dimmed the display a bit too much when using it indoors, forcing me to crank the brightness bar up after unlocking the phone.

The display's HDR10+ certification sadly wasn't of much use in some streaming apps such as Netflix, which did not detect the display as HDR-ready. HDR content viewed on the YouTube app seemed to show colour banding. Standard definition content looked sharp and showcased deep blacks. The stereo speakers made the audio experience immersive, but sounded a bit distorted at higher volume.

Battery life on the OnePlus Nord 2T 5G was quite good, overall. The phone easily lasted two days with casual use which included some gaming. With heavy use, which included around two hours of gaming and an hour of camera usage, the phone lasted a day and half, which is still quite impressive. Our HD video loop test lasted a good 22 hours and 55 minutes which is again very good. The bundled charger managed to charge the phone from zero to 55 percent in 15 minutes and charged it completely in 30 minutes.

The OnePlus Nord 2T 5G has three rear cameras. There's a 50-megapixel primary camera with OIS (Sony IMX766 sensor), an 8-megapixel ultra-wide-angle camera and a 2-megapixel monochrome camera, which is mainly used for gathering depth data when using Portrait mode. Selfies are handled by a 32-megapixel front-facing camera. The camera interface is similar to what we've seen on recent OnePlus phones, with some options hidden inside the mini slide-out menu under the ellipsis button. It's very similar to what you will see on recently launched Oppo and Realme devices.

Photos taken in daylight came out sharp and clear with decent dynamic range but had less detail in the darker areas. Colours were quite accurate, but their appearance varied based on the colour profile I had set for the display. If it was set to Vivid, then everything looked oversaturated when viewing the photos on the phone. The 2X digital zoom was surprisingly useful and captured clear shots provided there was enough light. The ultra-wide-angle camera captured photos with lesser detail and limited dynamic range in comparison. Photos also had noticeable purple fringing in the brighter areas.

The primary camera is no replacement for a dedicated macro camera, but, I managed to get some good close-ups of flowers from a distance and they looked quite sharp.

Selfies appeared a bit oversharpened but decent overall with good dynamic range. Selfie portraits also appeared sharp and had good edge detection but with limited dynamic range as the backgrounds in most photos appeared overexposed with blown-out highlights.

In low light, the ultra-wide-angle camera captured photos that were mostly unusable. The primary camera managed sharp photos with good detail and dynamic range. I only really needed to use the dedicated night mode in scenes with really dim lighting. However, I did come across some shooting scenarios where the dynamic range fell short and images had clipped highlights near some artificial sources of light. In short, low-light performance was not entirely consistent. Night mode captured images with better dynamic range and lower noise, but appeared a bit oversharpened. I have seen better and more consistent low-light camera performance from the Realme 9 Pro+ 5G (Review).

Videos shot at 1080p 30fps from the OnePlus Nord 2T 5G looked a bit soft but had excellent stabilisation. 1080p 60fps video had noticeably lesser details. 4K footage maxed out at 30fps and it had the best details, a steady bitrate and good stabilisation. Low-light 4K videos had the best quality, as 1080p footage looked a bit soft with a noticeable shimmering effect when walking.

The OnePlus Nord 2T 5G at Rs 28,999 delivers everything most users would ever want in a mid-range smartphone, and that's about it. It does not go above and beyond to deliver something more or add any exceptional value. Everything is within limits whether this is the processor (strictly mid-range), the camera selection (no macro feature), or the display (limited to 90Hz). But whatever it does, it does fairly well and that makes it a decent all-rounder at this price point. However, the top-end 12GB RAM (priced at Rs. 33,999) variant makes little sense mainly because competing devices such as the Nothing Phone 1 (First Impressions) offers better features such as wireless charging and an IP53 rating.

If you're looking for other options than the Nord 2T 5G, then brands such as iQoo and Realme do offer products that are better value. The iQoo Neo 6 (Review) offers a more powerful Snapdragon 870 SoC, a 120Hz AMOLED display, a bigger 4,700mAh battery, and a macro camera from Rs. 29,999. There's also the Realme's 9 Pro+ 5G (Review), which has a capable Dimensity 920 SoC, the same primary camera, a macro camera and a similar 90Hz AMOLED panel as the Nord 2T but starts at Rs. 24,999 for the 6GB variant.