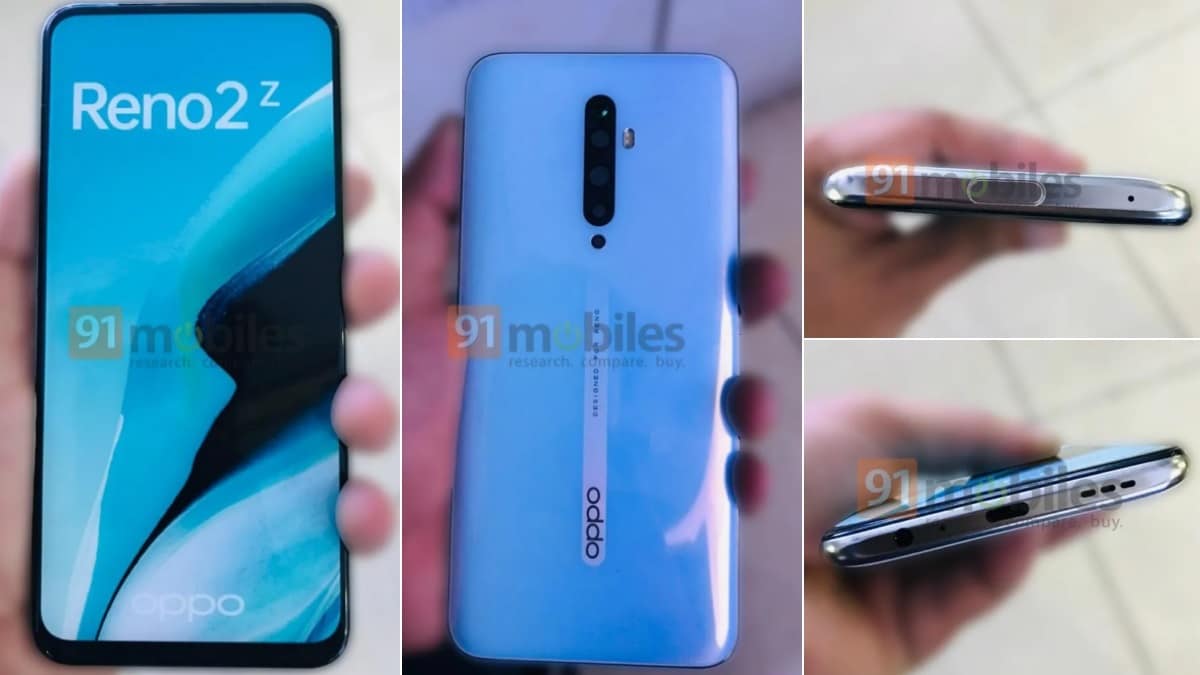 The Oppo Reno 2 series is all set to go official in a less than two days from now, but there is no stopping the leaks. Now, the key specifications of three smartphones in the Reno 2 series – the Reno 2, Reno 2Z and the Reno 2F have surfaced online, alongside details about their camera hardware. Live images of the Oppo Reno 2Z in its light blue variant have also surfaced online, showing quad rear cameras and a full-screen display. Moreover, hands-on images of the Oppo Reno 2 in its white avatar have been leaked as well.

The latest Oppo Reno 2 series leak, which comes courtesy of a 91Mobiles report, details the key internal specifications of the three upcoming phones. Starting with the Oppo Reno 2, the phone is tipped to come equipped with a 6.55-inch full-HD+ (1,080 x 2,400 pixels) display with 20:9 aspect ratio, 93.1 percent screen –to-body ratio, HDR10 support, and Corning Gorilla Glass 6 protection. The phone will be powered by the Snapdragon 730G, which has already been officially confirmed, and it will feature a shark-fin style elevating front camera. Additionally, it will reportedly come equipped with a 4,000mAh battery with support for 20W VOOC 3.0 fast charging.

Talking about cameras, the Oppo Reno 2 is tipped to come equipped with a 48-megapixel primary camera, assisted by a 13-megapixel, 8-megapixel, and 2-megapixel sensors, just as a previous leak indicated. The phone will come with an “Ultra Night Mode” for low-light photography, 2x optical zoom, 5x hybrid zoom, 20x hybrid zoom, OIS and EIS for video stabilisation, ultra-steady video mode for up to 60fps frame rate, and support for recording 116-degree wide-angle videos.

A different variant of the Oppo Reno 2 with 128GB of storage has been spotted on AnTuTu as well, scoring 259,109 on the benchmarking platform.

As for the Oppo Reno 2Z, it will reportedly sport a 6.53-inch full-HD+ (1,080 x 2,340 pixels) display with Gorilla Glass 5 protection and 19.5:9 aspect ratio. It is said to be powered by the MediaTek Helio P90 SoC, paired with 8GB of RAM and 256GB of internal storage. The phone will reportedly come equipped with a 4,000mAh battery with support for VOOC 3.0 charging.

Lastly, hardware specifications of the Oppo Reno 2F have also surfaced online. The Oppo Reno 2F is touted to come equipped with a 6.53-inch full-HD+ (1,080 x 2,340 pixels) display with 19.5:9 aspect ratio, and Gorilla Glass 5 protection. It will reportedly be powered by the MediaTek Helio P70 SoC, paired with 8GB of RAM and 128GB of internal storage.

In the camera department, the Oppo Reno 2F is expected to come equipped with a 48-megapixel Samsung GM1 sensor, accompanied by a wide-angle 8-megapixel sensor with 119-degree field of view, and a couple of 2-megapixel sensors for portrait photography. Camera features include Ultra Night Mode 2.0 for low-light photography, and 10x digital zoom but no EIS for video stabilisation.

In addition to the leaked specifications, live images of the Oppo Reno 2Z have also surfaced. They show the phone clad in a light blue shade, its quad rear cameras and the centrally aligned pop-up selfie camera. The leaked images, which come courtesy of 91Mobiles, also show the phone's full-screen display with minimal bezels. Moreover, a tipster going by the username @Hackersimar, has also shred images of the Oppo Reno 2Z in its black variant and the Oppo Reno 2 in its white version. The leaked images show a quad rear camera and a subtle gradient finish on both the phones.