Poco F4 5G India launch date is yet to be revealed. 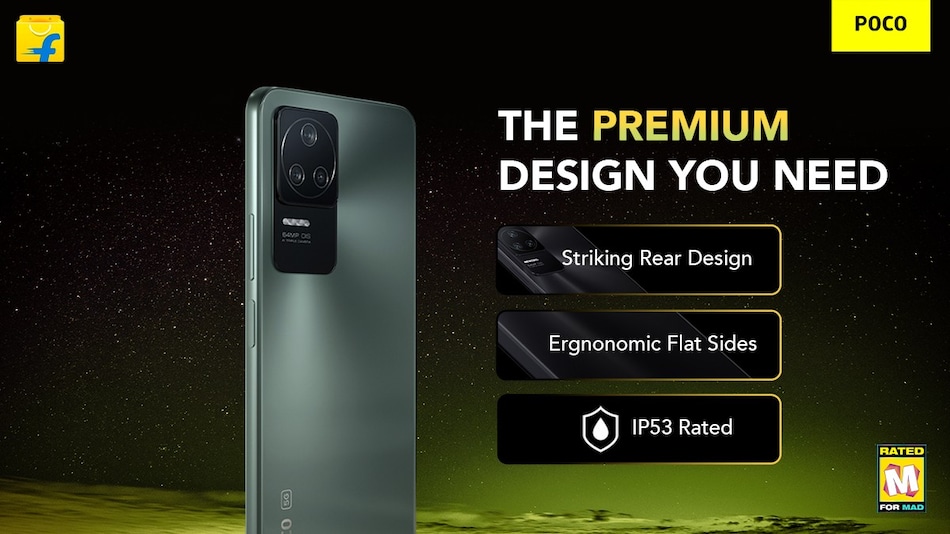 Poco F4 5G will look identical to the Redmi K40S

Poco F4 5G has been revealed in detail ahead of its official launch in India. The new Poco phone, which was speculated to be a Redmi K40S rebranding, appears to share the same design and aesthetics of the Redmi phone that debuted in China earlier this year. The latest teasers of the Poco F4 5G also confirms its camera details. Separately, Poco has teased that the new smartphone will come with an upgraded liquid cooling technology for thermal management.

The official Poco India account on Twitter has released the teasers of the Poco F4 5G. One of the teaser images shows the phone from the back. It seems quite similar to the Redmi K40S, with the same camera module design and gradient finish. However, the new model carries a Poco branding over the Redmi one to bring some distinction.

The teaser also says that the Poco F4 5G will come with an IP53 rating, which means it will resist splashes to some extent.

Another teaser released by the Poco India account shows that the Poco F4 5G will carry a triple rear camera setup, with a 64-megapixel primary sensor that will apparently have optical image stabilisation (OIS).

Details about the other two cameras of the Poco F4 5G were not made public at the time of filing this article.

The Poco F4 5G is also separately teased to have LiquidCool 2.0 along with a Snapdragon 870 SoC to help deliver "sustained peak performance" to users.

Poco has compared the performance of the Poco F4 5G over time graph with the OnePlus 10 Pro to show the former's superiority in the competition.

"With Liquidcool 2.0, we are further upping the game when it comes to thermal management. During strenuous tasks, as the chipset gets hotter, the vapour chamber absorbs the heat generated and turns the liquid inside into vapour, which then condenses and brings down the ambient," the company said.

The LiquidCool 2.0 technology in the POCO F4 5G ensures that it stays cool under all kinds of heavy usage that too without any hiccups.

Earlier this week, the smartphone maker confirmed that the Poco F4 5G will come with up to 12GB of RAM and 256GB storage. The phone is also tipped to have three distinct colour options.

Poco has not yet revealed the exact launch date of its new smartphone. However, given the degree of details we have through the recent teasers, the launch could be just around the corner. It is already teased to be the global debut of the Poco F4 5G in India. The phone is expected to debut with a price tag of Rs. 26,999.