Poco F4 5G Review: Is It a Serious Contender? 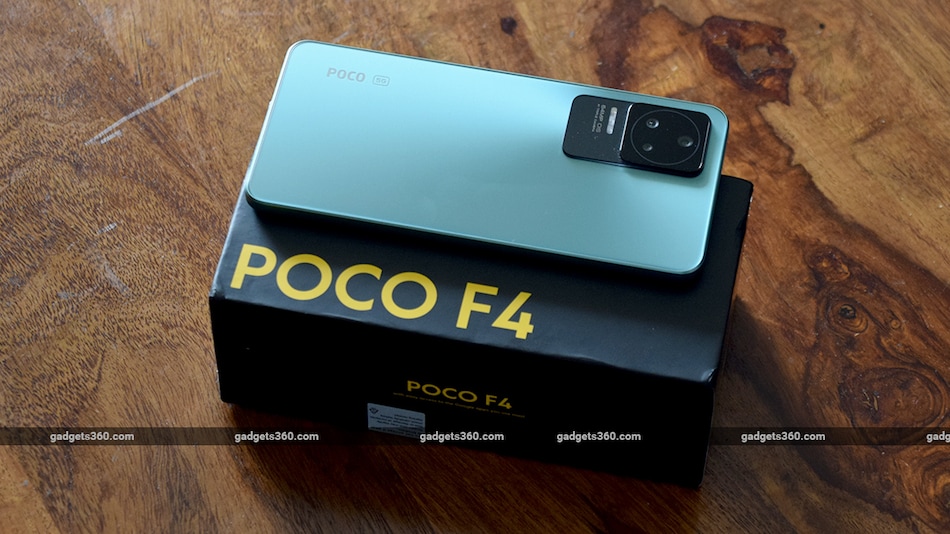 The Poco F4 5G offers a good balance of specifications for its retail price as we've already seen in our first impressions. However, this smartphone faces stiff competition from brands such as OnePlus, iQoo, and even its close cousin Xiaomi. It's time to find out whether the F4 5G is worth buying or whether you'd be better off with something from one of these other manufacturers at this price.

The Poco F4 5G looks like a premium smartphone thanks to its frosted glass back and matte frame. It's a bit on the heavier side, weighing about 195g, but it's not a very thick phone at 7.7mm. Even though the frame of the phone is flat, there are chamfered edges so it doesn't dig into your palm when holding it.

One thing I wasn't able to get used to was its buttons. The volume and power buttons are both on the right side of the phone and are a bit too recessed and stiff for my liking, requiring extra effort to use. They all have the same texture too, which makes it a little tricky at times to tell which is the one you want, especially since the power button houses the fingerprint sensor.

The Poco F4 5G doesn't have a headphone jack, but you get stereo speakers with Dolby Atmos and also an infrared emitter. The retail package includes a case, 67W power adapter, data cable, and even a USB Type-C to 3.5mm headphone adapter, which is thoughtful.

The display is one of the main attractions of the Poco F4 5G, and should appeal to those who consume a lot of media on their smartphones. It's a 6.67-inch E4 AMOLED display with a 120Hz refresh rate. Dolby Vision HDR playback is supported in the Netflix app. The display also supports HDR10+ playback. You get a full-HD+ resolution with a relatively high pixel density of 395 ppi, and Corning Gorilla Glass 5 for scratch protection. The Poco F4 5G comes with a pre-applied screen protector which tends to pick up a lot of smudges and fingerprints.

The Poco F4 5G uses a Qualcomm Snapdragon 870 SoC, and in India, there's support for up to 10 5G bands. There's also dual-band Wi-Fi ac, Bluetooth 5.2, NFC, and the usual array of sensors and satellite navigation systems. Poco claims it has used a vapour chamber and graphite sheets in the F4 5G, to keep the SoC running cool under load. The phone also has an X-axis linear vibration motor for more precise haptics.

Poco told Gadgets 360 the F4 5G has an IP53 rating for dust and water resistance, even though I wasn't able to find any explicit mention of this feature in any of the brand's marketing material or website listing. The phone has a 4,500mAh battery with support for up to 67W wired fast charging.

The Poco F4 5G runs on MIUI 13 (v13.0.3) based on Android 12. During the course of this review, the phone did receive some updates, the last one being the June 2022 Android security patch. MIUI is generally quite a bloated skin on Xiaomi smartphones with a lot of the first-party apps being notorious for spamming you with annoying notifications. On the F4 5G, you still get most of the bloatware but there's next to no notification spam despite the same apps such as GetApps and Themes being preinstalled. On the downside, Poco hasn't committed to any long-term updates (yet) for the F4 5G.

The user interface is slick and fluid with plenty of options for customisation. The always-on display can be tweaked to your exact liking, and on the F4 5G, you can have it enabled all the time or schedule it for certain times, unlike on some of other Poco's other offerings such as the X4 Pro 5G (Review). All the usual MIUI shortcuts and gestures are available too.

The Poco F4 5G ran quite well during the review period and I didn't face any performance issues. The fingerprint sensor was very reliable for authentication and I like the fact that you can choose between a touch and a press of the power button to activate it. Face recognition worked well too as long as there was enough light around.

HDR media streamed over the Internet looked very good on the Poco F4 5G's display. Colours were vivid and the brightness was more than adequate. Dolby Vision shows on Netflix looked good and HDR videos in general were very enjoyable. The stereo speakers can get very loud and sound good. Games ran very well too on the F4 5G. Popular titles such as Asphalt 9: Legends and Call of Duty: Mobile ran smoothly.

The performance of the Poco F4 5G is solid, especially with gaming

The Poco F4 5G is able to maintain its cool quite well even after 20 minutes of gaming. Benchmark numbers were strong, and it scored 684,474 points in AnTuTu and a solid 50fps in GFXbench's ‘Car Chase' test.

Battery life on the Poco F4 5G was pretty good. On average, with medium to light usage which included a bit of gaming, watching videos, Web browsing, the F4 5G still managed to last for a little over a day. The phone charges very quickly thanks to the bundled high-wattage power adapter. In our battery loop test, the Poco F4 5G ran for 18 hours and 14 minutes, which was good.

The primary camera on the Poco F4 5G has a 64-megapixel Omnivision sensor with an f/1.8 aperture and optical stabilisation (OIS). You also get an 8-megapixel ultra-wide camera and a 2-megapixel macro camera on the back. Selfies are handled by a 20-megapixel front-facing camera. The camera app should be familiar to anyone who has used a recent Xiaomi smartphone. There are a lot of shooting modes for both stills and video. The main rear camera supports video recording up to 4K 60fps, but the ultra-wide and selfie cameras are restricted to 1080p 30fps.

Landscape photos captured in daylight looked good, with vivid colours and a decent level of detail, but textures on objects were smoothened and not very distinct when I looked close enough. The ultra-wide camera had a more natural colour tone but details were considerably weaker and I noticed some very evident chromatic aberration along the edges of some objects. Close-up shots looked good but I often had to tap the screen to make sure focus was locked properly. Once again, images looked good but sharpness was a bit lacking. Macro photos taken under adequate light looked surprisingly decent.

The rear cameras really struggled with exposure in low-light landscape shots. Details were lacking, objects had poor texture quality, and darker regions appeared as black patches. Night mode had very little impact on bettering the exposure or details. The ultra-wide camera was even weaker in low-light scenarios and while Night mode did help a little, it wasn't enough to get a usable photo.

Videos recorded at 4K 60fps looked good. There's no stabilisation but the autofocus was steady, details were good and colours looked punchy. 4K 30fps videos had stabilisation but footage looked a bit jerky if recorded when walking, even slowly. There is a ‘Steady video' toggle that will restrict you to 1080p recording when enabled, but footage still looked jerky and was heavily cropped. Low-light videos had visible noise and jitter due to stabilisation.

The Poco F4 5G is a well-designed smartphone that looks and feels premium. It offers very good gaming performance, above-average battery life, quick charging, and a very nice display that supports Dolby Vision HDR playback. The IP53 rating also is a nice bonus. This phone offers better value than the Xiaomi Mi 11X (Review), which is essentially the same device but with slower charging. The 12GB RAM version is worth going for if you can find it selling for less than Rs. 30,000, however at Rs. 33,999, you'd be better off with the Nothing Phone 1 (Review).

If you're looking for good camera performance, phones such as the Realme 9 Pro+ (Review) and OnePlus Nord 2T (Review) would be better options. The recently launched Oppo Reno 8 (Review) should also be a good camera smartphone since it's similar to the Nord 2T, however we'll reserve our final verdict on that till we finish reviewing it.