Realme Narzo 20 was launched last year and is the second phone with Android 11 update. 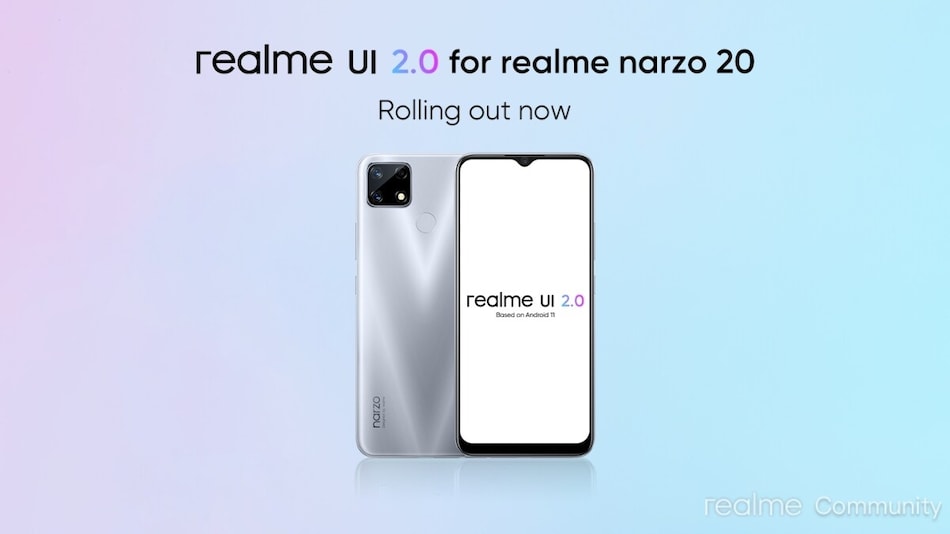 Realme Narzo 20 is the second device to get Realme UI 2.0

Realme Narzo 20 is now receiving the stable version of its Android 11-based Realme UI 2.0 update, the company has announced. The rollout will be conducted in batches and will be made available for everyone eventually. The new UI will receive a bunch of new features like an enhanced Dark mode, Tone Tunes among others. Realme's budget smartphone from last year is the second smartphone to receive the Realme UI 2.0 after Realme X50 Pro got it in December 2020.

In a blog post, the company announced that the Realme Narzo 20 (Review) will start getting the new Realme UI in a phased manner and all users of the smartphone will get the stable update soon. This is a major upgrade to the budget smartphone after being launched in September 2020.

To receive the update, your Realme Narzo 20 should run on software version A.25. Realme UI 2.0 features a new custom UI skin and gets features like three - Enhanced, Medium and Gentle - dark modes, new filters for the app drawer, gaming modes, Sleep Capsule that helps you manage your sleeping time, Tone Tunes that let you create new notification tones by linking together the existing ones, low battery message - sends your location to specific people in case the battery drops below 15 percent.

The build number for the latest update on Realme Narzo 20 is RMX2193_11.C.06. The update also gives you an option to rollback to Android 10-based Realme UI 1.0. However, before you rollback, you will have to make sure you have a backup of your data as it will be erased. For more detailed information, visit the at the bottom of the blog post on Realme Forum.

Realme Narzo 20 was announced in September and it features a MediaTek Helios G85 SoC with 4GB of RAM and 64GB or 128GB of storage. It also comes equipped with a triple camera setup which provides adequate performance only.

In December 2020, Realme had released the Android 11-based Realme UI 2.0 for Realme X50 Pro (Review), shortly after Google had announced Android 11 updates for its Pixel smartphones.

WhatsApp Said to Be Working on Password-Protected, Encrypted Chat Backups for Google Drive and iCloud