Realme X2 Pro was launched in 2019 with Android 9 Pie and was updated to Android 10 in April last year. 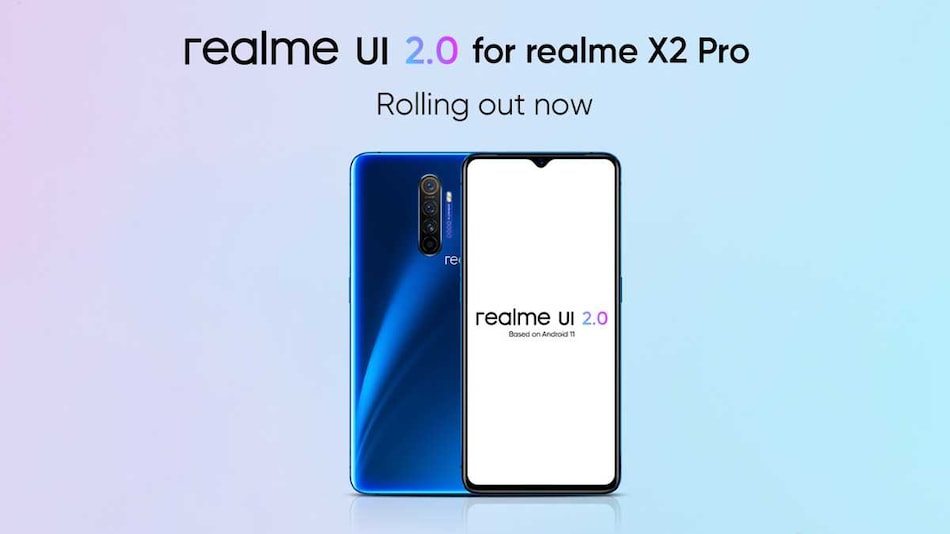 Realme X2 Pro has a notch for the selfie camera

Realme X2 Pro has started receiving stable Android 11 update in India. The company started testing Android 11-based Realme UI 2.0 on select smartphones, including Realme X2 Pro, back in January and now a stable build is finally rolling out with version RMX1931_11_F.11. It brings a host of changes and improvements in terms of personalisation, efficiency, security and privacy, system, camera, and more. This is a phased rollout and not all Realme X2 Pro users would receive the update right away.

In terms of personalisation, Realme UI 2.0 will allow you to create your own wallpapers by picking colours from photos. There are now three Dark mode styles — enhanced, medium, and gentle. Third party app icons are now supported on the home screen. To improve efficiency, Realme UI 2.0 allows you to drag text, images, or files from one app to another in split screen mode or out of floating windows.

System improvements include Tone tunes, a feature that forms a single melody for consecutive notification tones. Weather animations have been added as well. Vibration effects for text input and gameplay have been optimised, and so has the auto brightness feature. You can now combine two folders and there are filter that can be used to sort apps by usage frequency, install time, or letters.

Realme UI 2.0 version RMX1931_11_F.11 brings improvements to the SOS functions, allowing you to quickly display your personal emergency info to first responders. The Permission manager has been optimised and with the Low battery message feature, a message to share your location with select people can be quickly sent when the phone's battery is lower than 15 percent. App lock toggle is now available in quick settings. Your personal hotspot can be shared via QR code.

In terms of camera improvements, photos and videos that you just took will have a shortcut for sharing instantly. An inertial zoom feature has been added to make zooming smoother during videos. Level and grid options are now available in the camera app.

To check if you have received the update, head to Settings > Software update and you should see it here. Realme says make sure you are on RMX1931EX_11.C.37/ RMX1931EX_11.C.38 to get the update. As mentioned earlier, this is a phased roll out and Realme says the update has been randomly pushed out to a limited number of Realme X2 Pro users to ensure stability. If no critical bugs are found, the update will be made available to a broader set of users, after which it will be available to everyone in the coming days.