Redmi 10 in India seems to be a completely different model over what was introduced globally last year. 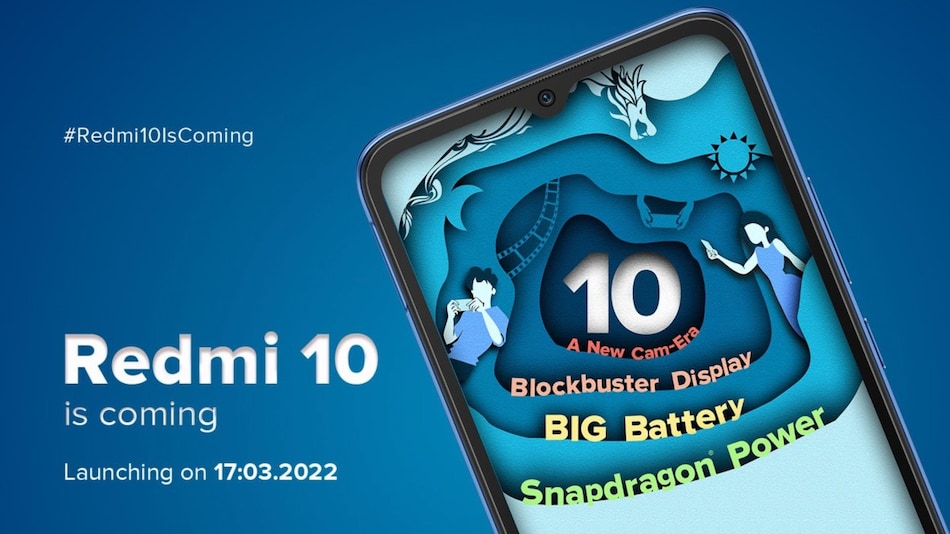 Redmi 10 India launch date is set for March 17, Xiaomi sub-brand announced on Thursday. The new Redmi phone is teased to come with a waterdrop-style display notch and will be equipped with a Qualcomm Snapdragon SoC that is two times faster than the previous generation. Redmi 10 in India is also teased to have a dual rear camera setup, with a 50-megapixel primary sensor. Globally, the Redmi 10 was unveiled last year. The brand also introduced its upgrade as the Redmi 10 2022 last month.

The official Redmi India account on social media announced the launch date of the Redmi 10 in the country. Xiaomi also sent a media invite for the launch.

Additionally, Xiaomi has created a dedicated microsite to tease the launch of the Redmi 10 in the country. The microsite suggests that the India variant of the Redmi 10 could come with a distinct list of specifications over what were available with its global model last year. The new phone also appears to be different from the Redmi 10 2022 that came last month with a few differences over the original model.

Redmi 10 price in India is expected to be on the same lines as the Redmi 9 that debuted in the country in August 2020 starting at Rs. 8,999. The older model now has a slightly higher current price of Rs. 9,499 for 4GB + 64GB configuration.

The Redmi 10 is also expected to be more affordable than the Redmi 10 Prime that was launched in September with a starting price of Rs. 12,499.

As per the microsite, the Redmi 10 in India will feature a waterdrop-style display notch. This is unlike the global Redmi 10 and Redmi 10 2022 that both have a hole-punch display design. The new smartphone is also teased to have a 6nm Snapdragon SoC — different from the global models that both have the MediaTek Helio G88 chip.

Further, the finish of the India variant of the Redmi 10 also seems different from what was introduced in the global markets. The microsite shows that the phone has a smudge-free finish with a textured design.

Other teasers available on the microsite show that the Redmi 10 in India will come with an “ultra-fast” storage, “massive” battery, and “fast charging” support. The phone is also teased to have a “grand” display.