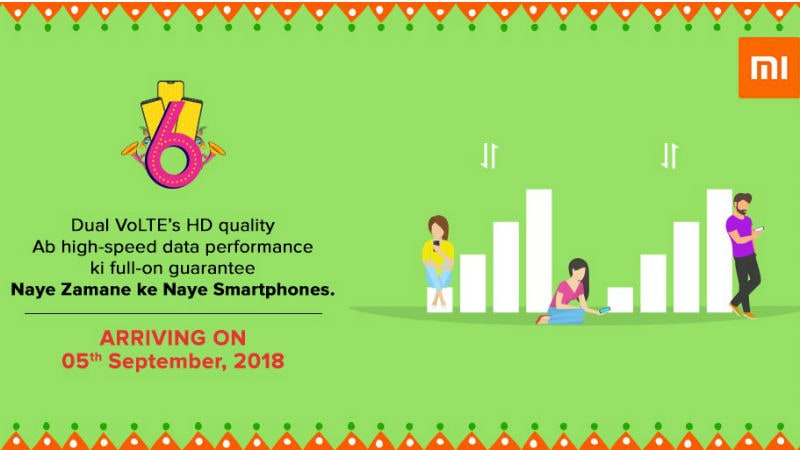 Xiaomi will launch three Redmi 6 series smartphones in India on Wednesday and they will come with dual 4G VoLTE support. The Chinese manufacturer had previously teased the September 5 launch of the new handsets in the country, and they are expected to be the Redmi 6, Redmi 6A, Redmi 6 Pro. While Xiaomi has not revealed the name of the smartphones yet beyond the number '6', it has teased the presence of the dual 4G VoLTE feature in them. To recall, Xiaomi had unveiled the three smartphones in the Redmi 6 lineup in June in China. While Redmi 6 and Redmi 6A were launched on the same day, and the Redmi 6 Pro was launched later that month.

In a tweet on Saturday, Xiaomi India shared an image with the words "Dual VoLTE's HD quality" followed by "Ab high-speed video data performance ki full-on guarantee." The teaser essentially reveals that the Redmi 6 lineup will come with dual 4G VoLTE support, meaning you will be able to get 4G VoLTE connectivity on both the SIM cards. This feature was not present in Xiaomi Redmi 5 and the Redmi 5A.

Last week, Manu Kumar Jain, Xiaomi Global VP and Xiaomi India Managing Director, had posted a tweet that hinted at the imminent launch of the Redmi 6 lineup in India. While the tweet itself did not reveal the name of the smartphones, it contained a video that showed the number 6, with three smartphone outlines behind it. As per the video, two of the smartphones come with no display notches and the third one does, hinting at the Redmi 6, Redmi 6A, and Redmi 6 Pro.

The Redmi 6 series is the successor to the Redmi 5 and Redmi 5A, which were quite popular in India. Notably, Redmi 6 and Redmi 6A will differ from their China variants as they will feature Qualcomm SoCs instead of the MediaTek processors they have in their home market.

The dual-SIM Redmi 6 runs MIUI 9 based on Android 8.1 Oreo and sports a 5.45-inch HD+ (720x1440 pixels) display with an 18:9 aspect ratio. It is powered by an octa-core 12nm MediaTek Helio P22 processor, clocked at 2GHz. It bears a dual camera setup with a 12-megapixel primary sensor and a 5-megapixel secondary sensor. At the front, there is a 5-megapixel front camera. The phone is fuelled by a 3,000mAh battery.

The Redmi 6 Pro is also a dual-SIM smartphone that runs MIUI 9 based on Android 8.1 Oreo. It comes with a 5.84-inch full-HD+ (1080x2280 pixels) display and is powered by an octa-core Snapdragon 625 SoC clocked up to 2GHz. It features a dual rear camera setup with a 12-megapixel primary sensor and a 5-megapixel secondary sensor and has a 5-megapixel selfie camera. It is fuelled by a 4,000mAh battery.