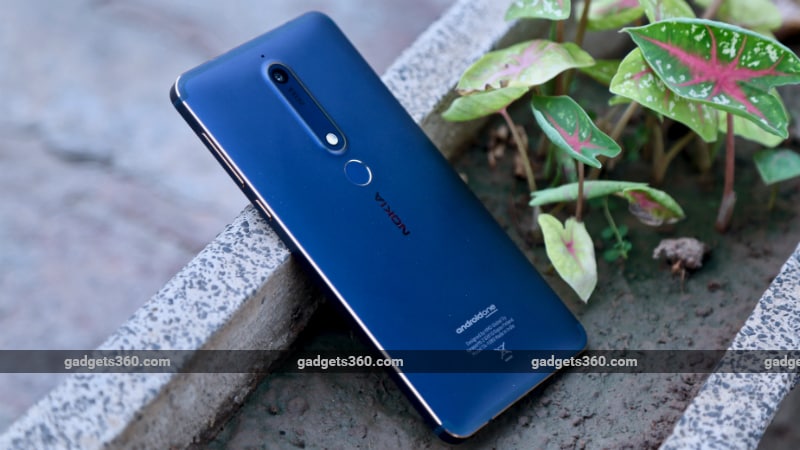 We were impressed with the clean and fluid software package, build quality, performance, and battery life of the Nokia 6 (2018). But the low-light camera performance and mediocre fingerprint sensor were hard to ignore. We are eager to examine if the extra gigabyte of RAM has any real-world effect on performance and if it's worth shelling out an extra 2,000 rupees.

We won't spend too much rehashing the Nokia 6 (2018)'s design, as it has not changed since we last examined it in detail. It is worth reiterating that the smartphone is built like a tank and feels incredibly solid in the hand. HMD Global told Gadgets 360 that build quality was its biggest priority while designing the second generation Nokia 6 and the end result speaks for itself.

The smartphone is a bit too wide, which hampers one-handed use considerably. The sizeable borders around the display also look a bit dated. On a positive note, the accents around the buttons, rear camera and frame look classy and add design flair to what is otherwise a staid, industrial design.

The layout is the same as the 3GB variant of the phone. There is a hybrid dual-SIM tray on the left edge, a power button and volume rocker on the right edge and a 3.5mm headphone socket on the top. The USB-Type C port is present on the bottom along with a loudspeaker, which is rather shrill and tinny. The Nokia 6 (2018) is one of the few smartphones below Rs. 20,000 to abandon the age-old micro-USB port.

This variant of the Nokia 6 (2018) comes with 4GB of RAM and 64GB of internal storage. It is powered by the Qualcomm Snapdragon 630 processor clocked at 2.2GHz, which is a huge improvement over the under-powered Snapdragon 430 found in last year's Nokia 6 (Review). As we noted in our earlier review, the 5.5-inch LCD panel is bright and punchy but suffers from poor viewing angles.

Apart from the extra helping of RAM and additional storage, the new variant of the Nokia 6 (2018) is identical to the one we reviewed a few weeks ago. A few software improvements have helped the camera performance somewhat, which we will talk about in detail below. You can read about the rest of the specifications in our review of the 3GB RAM variant.

When HMD Global resurrected Nokia mobile from the dead, it decided to equip all of its smartphones with stock Android in a bid to differentiate them from the crowd. Pure, secure, and up to date was the company's motto and it has more or less delivered on their promise of timely updates. Fast forward a year later and the company has now embraced Android One, which hopefully means even more frequent software updates.

The Nokia 6 (2018) runs Android 8.1 Oreo devoid of any overlays or third-party bloat. It is Android as Google intended it to be. There are a few non-intrusive value additions, such as 'Ambient Display' which shows notifications for missed calls, alarms, and notifications without waking the phone from sleep, and a couple of motion-triggered gestures like mute on pickup and lift to check phone. You can also swipe the fingerprint sensor to pull down the notification tray which is quite nifty. HMD Global has promised updates to Android P as well as Android Q, as and when they are released.

Thanks in part to the clean and fluid software package, we were quite impressed with the performance of the 3GB RAM variant of the Nokia 6 (2018). Does the extra gigabyte of RAM have any substantial effect on performance? That's the money question.

Truth to be told, we didn't find any major differences between the new and older variants of the Nokia 6 (2018) in terms of day to day performance. We faced no issues with multi-tasking and playing heavy games in the 3GB variant and the experience was much the same here. That said, games like Asphalt 8 did exhibit slightly faster loading times and we always had close to 50 per cent free RAM.

Apart from the multi-core test in Geekbench, which saw an increase of 15 percent, benchmark results were more or less the same. There was no discernible difference in battery life either. Just like the 3GB variant of the Nokia 6 (2018), this one lasted us an entire day of medium to intensive use with juice left for more. In our HD video loop test, the phone lasted 11 hours and 30 minutes, just 10 minutes less than the 3GB variant. A fast charger is bundled in the box which took the Nokia 6 (2018) from an empty tank to 42 percent in 30 minutes.

As we noted in our earlier review, the rear-mounted fingerprint sensor is slow, inaccurate, and awkwardly placed and face recognition works well only when lighting conditions are favourable.

On the imaging front, the Nokia 6 (2018) has a single 16-megapixel rear camera with a dual LED flash and an aperture of f/2.0, and a single 8-megapixel fixed-focus front camera with the same f/2.0 aperture. We were not overly impressed with the rear camera when we first tested the Nokia 6 (2018). Even though it performed admirably in adequate light, shots taken after dark had a fair bit of noise and lacked detail. Autofocus was also inaccurate and the camera app struggled with white balance in auto mode.

While low-light performance is still disappointing and auto-focus leaves a lot to be desired, the white balance issue has been mitigated considerably. We are pleased to report the phone no longer has trouble rendering colours accurately in auto mode. These improvements are not exclusive to this variant and have also made their way to the cheaper variant of the Nokia 6 (2018).

The professional mode still works well, and allows you tweak the ISO, shutter speed, exposure and white balance with a swipe of the thumb. There is a bokeh mode on offer as well, which works only with the front camera and is facilitated via software algorithms. The resulting shots are nothing to write home about, with the edge detection being rather poor.

The front camera does a good job in favourable lighting but struggles when light is inadequate. A front facing LED flash is conspicuous by its absence and the screen flash does not really help matters much. "Bothie" mode also makes a return. While the ability to take photos/ videos with the front and rear camera at the same time is pretty nifty, the quality of both cameras decreases noticeably in this mode.

Video capture maxes out at 4K for the rear camera and 1080p for the front camera. The resultant videos have a good amount of detail but the onboard EIS is rather poor.

If the Nokia 6 (2018)'s stellar build quality, clean software package, good battery life and solid performance appeal to you, the variant with 3GB of RAM, which is priced at Rs. 16,999, is the one to buy. Potential buyers should also take a look at the Xiaomi Redmi Note 5 Pro (Review) and Asus ZenFone Max Pro M1 (Review), which cost less and offer a better set of cameras.