Reliance Jio to Roll Out 5G Connectivity in India by October, Plans Full Coverage by 2023 End

Reliance Jio 5G services will be rolled out in key cities like Delhi, Mumbai, Kolkata, and Chennai by Diwali, the telecom operator said. 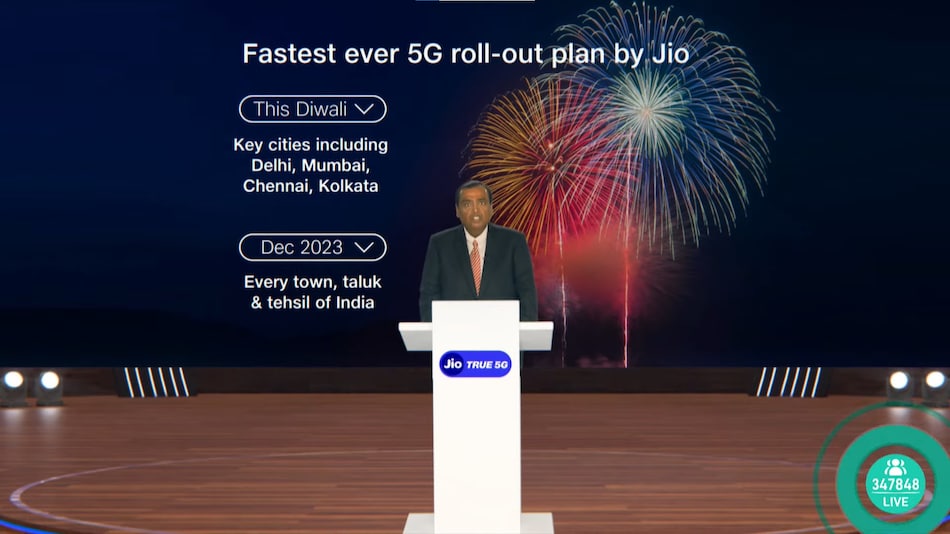 Jio is working with Qualcomm to develop 5G solutions for India

Reliance Jio will begin rolling out 5G services in India by October, Mukesh Ambani said at Reliance Industries' 45th Annual General Meeting (AGM) on Monday. The country's largest telecom operator announced a Rs. 2 lakh crore investment to deploy 5G connectivity in cities including Mumbai, Delhi, Chennai, and Kolkata by Diwali. It is confirmed the nationwide rollout of the 5G network by December 2023. It is associating with Qualcomm to develop 5G solutions for India. Jio also announced a service called Jio Air Fiber for offering an end-to-end wireless 5G experience.

During the 45th AGM of the company, Reliance Jio confirmed the rollout of 5G infrastructure in India. By Diwali 2022 we'll launch Jio 5G across multiple cities, including metro cities of Delhi, Mumbai, Chennai and Kolkata,” Mukesh Ambani said.

Ambani also stated that the company aims to deliver Jio 5G to every town, taluka and tehsil in India by December 2023. The company claims that its 5G rollout plan will be the fastest in the world.

The telecom operator also announced that it will invest Rs. 2 lakh crore for the deployment of the fifth-generation mobile network in the country. Jio is also joining hands with Qualcomm to develop 5G solutions for India. It is also associating with Google to develop affordable 5G smartphones and Google Cloud.

Jio chairman Akash Ambani also announced JioAirFiber which lets users access Gigabit-speed Internet without any wires at home and offices. The wireless single device showcased by the company can be plugged into the power source and will work as a Wi-Fi hotspot.