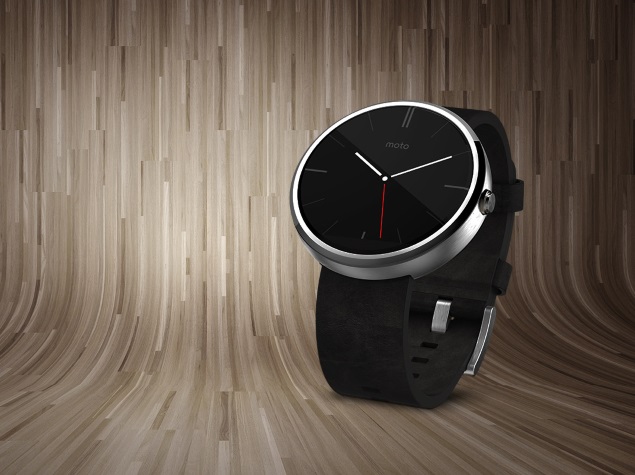 Motorola at its September 5 event in India has finally showcased the Android Wear-based Moto 360 smartwatch in all its glory, and put up all its specifications. While the company hasn't yet provided India pricing, it has detailed US pricing to $249 (roughly Rs. 15,000). Motorola says will be made available in India later this month.

The consumer electronics giant announced the Moto 360 will be available from Friday in black leather and a limited edition gray leather with suede finish in the US, starting at 12:00pm EST for motorola.com, Google Play (US), and through Best Buy stores and BestBuy.com.

The Moto 360, which is compatible with smartphones running Android 4.3 Jelly Bean or higher, features a 1.56-inch backlit LCD display with a resolution of 320x290 pixels - translating to a pixel density of 205ppi. It features Corning Gorilla Glass 3 protection.

It features a 320mAh battery, and Motorola says it will be sufficient for all day (mixed use). The Moto 360 supports wireless charging, and comes with a charging dock. It is powered by a TI OMAP 3 processor (exact chipset unspecified), coupled with 512MB of RAM.

It features 4GB of built-in storage, and comes with Bluetooth 4.0 Low Energy connectivity. It features a pedometer, and a optical heart rate monitor (PPG). It comes with an IP67 rating, making it water-resistant.

Other features include a single physical button, a vibration motor, and dual microphones.

The Moto 360 smartwatch was unveiled alongside the Moto G (Gen 2), and Moto X (Gen 2).
Comments