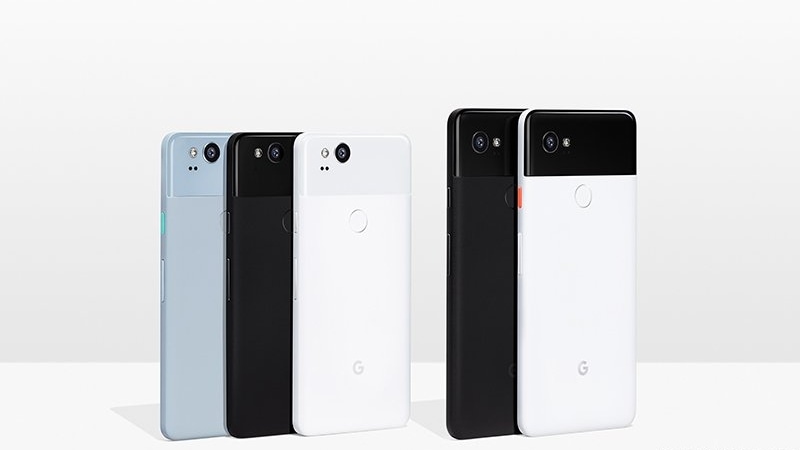 Google announced a flurry of new products on Wednesday, most notably the new Pixel 2 and Pixel 2 XL smartphones. Both feature a new design with OLED screens on the front and an evolution of the glass panel on the rear. The Pixel 2 has a 5-inch full-HD screen, while the Pixel 2 XL has a 6-inch 18:9 QHD+ panel. Both use the Qualcomm Snapdragon 835 SoC and have 4GB of RAM. Storage options on the Pixel 2 and Pixel 2 XL are 64GB and 128GB. Both phones also have an edge squeeze gesture that triggers the Google Assistant.

One of the biggest features is the camera, which has been given a chart-topping DxOMark score of 98, topping the iPhone 8 Plus and the Samsung Galaxy Note 8 which tied it just yesterday at 94 points. The new phones boast of incredible quality as well as a portrait mode that works with just one camera, using machine learning to figure out depth maps. The Pixel 2 is priced at Rs. 61,000 and Rs. 70,000 for 64GB and 128GB respectively, while the Pixel 2 XL will cost Rs. 73,000 and rs. 82,000 respectively. The Pixel 2 will go on sale from November 1, while the Pixel 2 XL will go on sale from November 15. Both will be sold offline as well as exclusively through Flipkart online.

Also announced at the same event were the new Pixelbook Chromebook, Google Home Max speaker, Home Mini, Pixel Buds earphones, and Google Clips action camera. A common thread running through all products and the event itself was Google promoting its ability to develop hardware, software and artificial intelligence in the same product. The Pixelbook is a high-performance 10mm thick convertible Chromebook that can be used in multiple modes and is the first laptop with Google Assistant built in. It also has a Pixelbook Pen accessory which can be used to select material on screen and trigger Assistant.

Home Max is a powerful new speaker that uses AI to detect the characteristics of a room and automatically adjust itself, and also has Assistant baked in. Home Mini is a smaller and less expensive Home speaker that can bring Assistant to multiple rooms in your house. New capabilities include individual user voice recognition and a household broadcast feature.

Pixel buds work with any Pixel 2 to enable near-real-time voice translation between people and works with 40 different languages. The Google Clips camera can capture spontaneous moments, determined using machine learning, and lets you select what to keep and what to discard.

Amazon launches Alexa-powered Echo smart speakers in India
Amazon has launched its Echo range of Internet-connected smart speakers in India. There are three models, the Echo Dot, Echo and Echo Plus, priced at Rs. 4,499, Rs. 9,999 and Rs. 14,999 respectively. Amazon says it has made a lot of effort to ensure that its voice assistant Alexa will work with Indian pronunciations and intonations as well as local names, places and music titles in non-English languages. Local partners include Saavn, Zomato, Ola, Uber, Freshmenu, and NDTV. India is only the fourth market for the Echo series after the US, UK, and Germany. Amazon Prime Music will also be launching in the country soon, and Echo buyers will be able to use it in preview form.

Amazon Diwali sale event begins, Flipkart teases its own
Amazon's latest sale event started up today, very shortly after the last one ended, but there are still plenty of interesting deals on smartphones and other electronics, plus credit card cashback offers and no-cost EMIs. There are also partnerships with Jio and Vodafone to give buyers extra 4G data on the purchase of smartphones. The iPhone 8 and iPhone 8 Plus were only just launched, but both get slight discounts, while the iPhone 7 gets a more generous price cut. Other phones on sale include the Google Pixel and Pixel XL, OnePlus 3T, BlackBerry KeyONE, Moto G5 series, and the Samsung Galaxy A5 (2017). There are also deals on TVs, hard drives, laptops, Amazon Kindle products, gift cards, and more.

One of Amazon's promotions is the first open sale of the Nokia 6, which is priced at Rs. 14,999. There is an exchange offer on the Nokia 6 and an extra benefit for Amazon Prime members. The device is sold exclusively on Amazon. Speaking of Amazon Prime, this could be your last chance to pick up a yearly membership at the discounted price of Rs. 499. The company has said that membership will go up to its official price of Rs. 999 in a few days.

Not to be outdone, Flipkart has teased a few details of what buyers can expect when its own festive sale event begins on Thursday. Deals will go live twice a day between October 5 and 8, with flash sales throughout. Discounts can be as high as 80 percent in some categories. Flipkart will also have credit card offers, exchange schemes, cash back deals, and no-cost EMIs.

Google CEO Sundar Pichai praises India team in NDTV interview
Google has only just launched the Pixel 2 and Pixel 2 XL, and company CEO Sundar Pichai took the time to sit down for an interview with NDTV ahead of the big event. According to him, Google's India team helped shape important products like Google Maps by coming up with insights like using crowdsourcing to overcome a dearth of local map data. The company has also created solutions to local problems, such as YouTube Go and Google Tez. You can watch the whole interview right here.

Xiaomi Mi Mix 2 coming to India on October 17
Xiaomi has announced that its near-borderless Mi Mix 2 smartphone will launch in India on October 10, just a month after its China debut. No price has been announced yet. The device has a 5.99-inch full-HD screen with an 18:9 aspect ratio and 1080x2160 resolution. It uses a Qualcomm Snapdragon 835 SoC with 6GB of RAM. There's a 12-megapixel rear camera and 5-megapixel front camera. There are three variants of the device in China with 64GB, 128GB, and 256GB of storage, plus a special edition with a ceramic body and 8GB of RAM plus 128GB of storage.

Airtel takes on Jio with new Rs. 799 prepaid plan
Airtel has announced a new prepaid tariff plan that includes 84GB of data plus unlimited national and local phone calls for 28 days, priced at Rs. 799. It competes directly with Jio's recently announced Rs. 799 pack for iPhone users which includes 3GB of data per day, free voice calls and text messages, and access to all Jio apps. In the case of the new Airtel plan, there is some fine print. Voice calls are free, but caps of 250 minutes per day and 1000 minutes per week apply.

Microsoft announces launch date for mixed reality headsets
Microsoft has disclosed fresh details about its ambitions for mixed reality and has announced that headsets from Acer, Asus, Dell, HP, Lenovo, and Samsung are now up for preorder, with a launch date of October 17, the same day that the Windows 10 Fall Creators' Update goes live. Games that will support the headsets include Minecraft, Arizona Sunshine, Superhot, Obduction, Skyworld, and Fantastic Contraption. There will also be a Halo Recruit minigame that will serve more as a demo than anything else. SteamVR is on the cards but won't be launching just yet. Microsoft is also launching a social app called AltSpace VR which promises 3D chatrooms, parties, and classes.

While most headsets will start at $299, Samsung has gone high-end with its HMD Odyssey model which will cost $499.99 thanks to the use of two 3.5-inch AMOLED screens. It's also the only model with an integrated microphone array and can be used to control Cortana or communicate in-game.

Yahoo data breach much worse than previously known
When a massive data breach in that took place in 2013 came to light last year, Yahoo said that around 1 billion user accounts were affected. Now, the company says that every single Yahoo account was compromised, taking the number up to 3 billion. The news had complicated the sale of Yahoo's assets to Verizon, and the new disclosure opens its new parent company up to much more legal trouble than it was already facing.

Hotstar offers deep discount on annual subscriptions
Amazon might be raising the price of Prime, but Hotstar is currently selling yearly subscriptions for just Rs. 696 per year, which is a considerable saving over the regular price of Rs. 199 per month. The offer is valid for new users and those whose subscriptions have lapsed, but not current users. Hotstar previously offered yearly subscriptions for Rs. 1200 and a 9-month plan for Rs. 999. There's no word yet on when this offer might end.