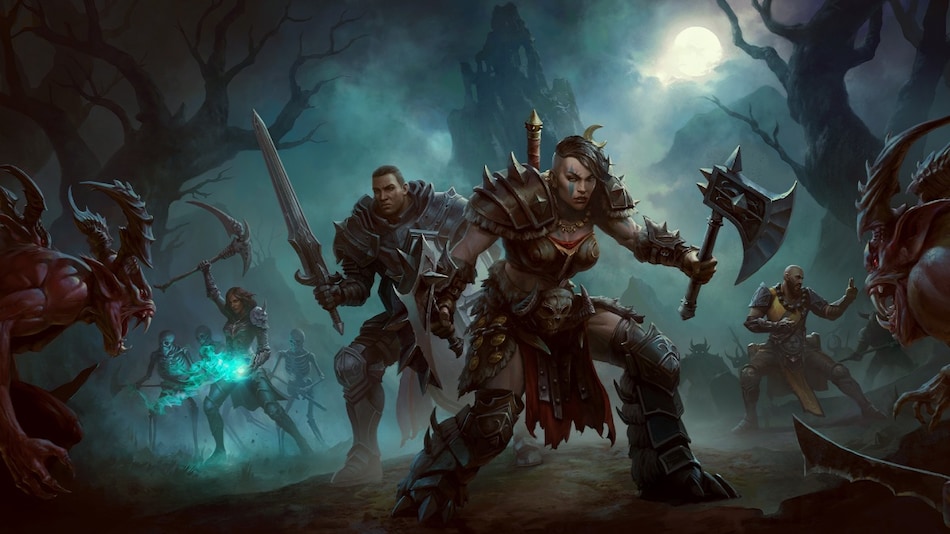 Diablo Immortal is designed for smartphones, but will also launch on PC

Diablo Immortal, The Quarry, and Sonic Origins are all set to release in June 2022, along with a host of other titles arriving over the course of the month. The summer holidays are nearly over, but if you're looking for a new title to settle down with once the monsoon season arrives, there's a lot to pick across a variety of genres. Football enthusiasts can pick up Mario Strikers: Battle League next week, a five-versus-five game with a few “game changing” tweaks. Hack-and-slash action role-playing game (RPG) fans can look forward to Fire Emblem Warriors: Three Hopes on the Nintendo Switch.

Prefer third-person shooter RPG titles? Outriders: Worldslayer is coming to PC and consoles with three different storylines to choose from, along with a mysterious new endgame experience. Gamers who enjoyed Sonic titles over the years can now play them in high definition, with unlimited lives in Anniversary mode with Sonic Origins. For those who get their thrills from interactive horror games, The Quarry will let you decide the fate of nine teenage summer camp counsellors with your decisions — complete with an online cooperative mode.

If you're trying to choose a new game to play, here's a brief list of titles that you can play on your PC, PlayStation 4, PlayStation 5, Xbox One, Xbox Series S, Xbox Series X, and Nintendo Switch in June 2022.

Blizzard Entertainment and NetEase developed Diablo Immortal is a free-to-play game with connections to the Diablo series — best known in the PC and gaming consoles scenario.

On the other hand, Diablo Immortal will primarily be launching on smartphones, along with a beta release on PC. Immortal is a massively multiplayer online (MMO) role-playing game that takes place between the events of Diablo II and Diablo III.

The six-character classes from the Diablo series also make their way to Immortal. Players, when creating a character can choose from Barbarian, Wizard, Monk, Necromancer, Demon Hunter, and Crusader. The game also features cross-save functionality.

When: June 10
Where: Nintendo Switch

In Battle League, players can tackle opponents aggressively and also use specific items to gain an advantage over others. Items such as banana peels can be placed on the field so that opponents can slip on them giving you a clear chance at the goal.

Mario Strikers: Battle League follows the street football format with a no-out-of-bounds rule. The entire stadium fence is laced with electricity, so players can ram their opponents into the fence and knock them over.

On the last day of the summer camp in Hackett's Quarry, nine teenage camp counsellors decide to throw a party. This party quickly turns for the worse and they have to survive the night. How many counsellors survive is eventually up to you in this interactive horror game.

The Quarry features branching storylines from every choice you make. In the end, either all or none of the campers would survive based on the patch. There is an online multiplayer mode where seven other players can watch your game and vote on key decisions. It also comes with a couch co-op mode.

If you don't feel like playing, you can even enjoy this cinematic experience as a movie. The developer Supermassive Games, which is renowned for the Until Dawn games, has utilised state of the art facial capture and film lighting techniques to make The Quarry immersive. The cast features popular Hollywood stars like David Arquette, Ariel Winter, Brenda Song, and more.

All of these games can be played in Anniversary mode, which introduces a revamped full-screen resolution and unlimited lives. There is also a Classic mode, which reinstates the original resolution with offers you a limited number of lives.

Sega has added new opening and ending animations to bridge all the games, allowing you to play all four of them as a single story. Earn coins to unlock new in-game content and challenges. You can also play Special Stages through the in-game museum.

When: June 24
Where: Nintendo Switch

Announced at Nintendo Direct in February this year, Fire Emblem Warriors: Three Hopes is the second Warriors game in the Fire Emblem franchise, after the 2017 release of Fire Emblem Warriors on the New Nintendo 3DS and Nintendo Switch. This upcoming hack-and-slash action role-playing game will offer similar gameplay as the Dynasty Warriors series.

Set in the continent of Fódlan, gamers will be offered three storylines, one for each house leader — Scarlet Blaze, Azure Gleam, and Golden Wildfire. Along with a new character, Shez, gamers can also play as characters from Fire Emblem: Three Houses, including Edelgard, Dimitri, and Claude.

Gamers will be introduced to a new villain — Ereshkigal, the leader of the human insurgents. As Worldslayer is set after the events of Outriders, you'll need to complete the original storyline first.

The upcoming expansion will add new locations and enemies to explore and fight, while adding a new Ascension progression system to make your hero more powerful than before. Outriders: Wordslayer will also feature a mysterious endgame experience titled The Trial of Tarya Gratar — we expect to learn more about it closer to the release date.

Outriders Review: Fun Co-Op RPG Shooter Gets in Its Own Way

Outriders: Worldslayer brings a new story along with additional features that expand on the original game
Photo Credit: Square Enix/ People Can Fly