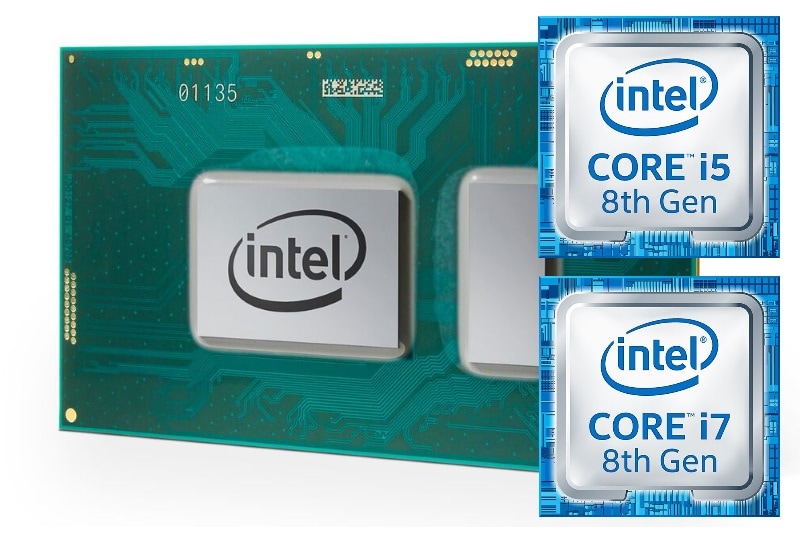 We've known for a while now that Intel will be shipping more than one processor architecture under the 8th generation Core brand. We've been expecting a fourth 14nm generation codenamed Coffee Lake this year and the much-delayed 10nm Cannonlake generation in early 2018, but now it has come to light that a third architecture will be clubbed into the 8th generation as well. Simply called Kaby Lake Refresh, this will be the basis of the 8th gen's U-series processors, which are targeted at mainstream and slim notebooks.

Two weeks ago, Intel announced that the first 8th gen Core CPUs will launch at 8:30pm IST tonight, and while the codename 'Coffee Lake' was not specifically brought up, it was widely expected that these would be the first models out of the gate. However, Intel has chosen to unveil Kaby Lake Refresh a few hours before the scheduled event.

Four new U-series 15W processors for laptops are being announced: the Core i7-8650U, Core i7-8550U, Core i5-8350U, and Core i5-8250U. While Kaby Lake Refresh is not a major new architecture, Intel is promising a 40 percent performance improvement compared to the 7th generation and up to 200 percent compared to a five-year-old machine. The most significant reason for this is the doubling of core counts from two to four, while actual design and manufacturing improvements contribute to a lesser extent.

Base speeds range from 1.6GHz to 1.9GHz, while boost speeds range from 3.4GHz to 4.2GHz. Cache sizes are also doubled, to 6MB on Core i5 CPUs and 8MB on Core i7 ones. Hyper-Threading remains exclusive to Core i7 models. The integrated GPU is now called Intel UHD Graphics 620 and is completely unchanged compared to Kaby Lake, except for the name change from HD to UHD to reflect its capabilities. The GPUs of Core i5 models run at 1.1Ghz while those of the Core i7 models run at 1.15GHz.

According to Intel, users can expect up to 10 hours of 4K video playback per charge on a laptop powered by one of these processors, as tested with a 70WHr battery and Windows 10. The company also says that tasks such as photo editing and video rendering are up to 48 percent and 14.7 percent faster on these processors compared to previous-generation ones. However, the major target will be people upgrading from laptops that are several years old. The company is also playing up the benefits of modern experiences such as Windows Hello authentication, voice interaction such as with the Cortana assistant, and stylus input which would not work as well on an older device.

Intel expects that 145 laptop models featuring these four new CPUs will be available in time for this year's holiday shopping season. There's no information about how the rest of the 8th generation will shape up, except for a note that desktop processors will launch in fall this year. It is not yet known how different Coffee Lake will be from Kaby Lake Refresh, but it is quite likely that core counts will increase across the board both due to improvements in power efficiency and because of competition from AMD's Ryzen series. It is also likely that Intel will reserve its 10nm process for ultra-low-power fanless Y-series chips.

Attacking the mainstream laptop segment first is an interesting choice for Intel. Previous generations have focused on Y-series models for ultra-light fanless tablets and 2-in-1s, or S-series models for desktops. Releasing these four CPUs under the 8th Generation banner allows Intel to target buyers during the busy US holiday shopping season