A compact and slim laptop with just the right amount of power and storage for the price. 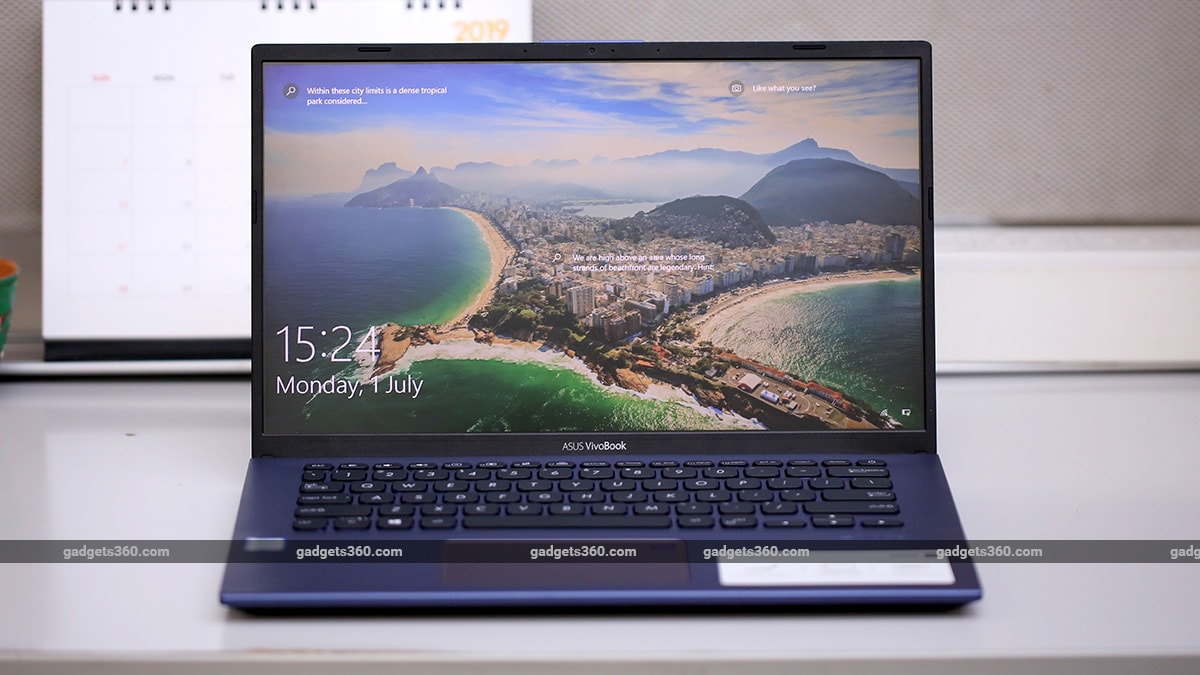 Asus recently launched a refreshed series of VivoBook laptops called the VivoBook 14 and VivoBook 15 in India. Of the two, the 14-inch version claims to be the world's smallest, most colourful 14-inch Ultrabook. This is a rather odd and awfully specific title to stake claim to, but it is what it is. The new laptop series focuses on compactness and mid-range performance in order to hit that starting price of Rs. 49,990.

However, rather than simply drop good components into a basic chassis, which would have been the easy way to achieve this pricing goal, the VivoBook 14 X412FA actually comes in multiple bright colour options and boasts of a modern design, with slim borders around its display. All the features point towards it being a fun little laptop, and it's now time to see if it does deliver on that promise.

The VivoBook 14 uses a plastic chassis, but the plastics are of high quality and feel very sturdy. We didn't notice any flex in the bodywork, keyboard area, or even the lid. We have the iridescent Peacock Blue colour trim, which looks really good. The colour shifts between purple and blue depending on the angle you look at it. The other Asus VivoBook 14 colour options are Slate Grey and Transparent Silver.

The Asus VivoBook 14 is compact and light, making it easy to travel with

The display looks massive, mostly due to the slim bezels on three of its sides. The ones on the left and right are just 5.7mm thick, while the one on the top is a little thicker so it can accomodate the webcam. The bottom bezel is much wider but you don't see most of it since the clever hinge mechanism hides the bottom portion of the lid, behind the laptop's body. This also lifts the bottom of the laptop up by two degrees, which offers a better ergonomic typing position.

The 14-inch display on the Asus VivoBook 14 has a full-HD resolution and a 16:9 aspect ratio. The panel doesn't have the best viewing angles, and colours look a little muted due to the narrow 45 percent coverage of the NTSC colour spectrum. It's a 60Hz panel and you get a matte, anti-glare coating, which is helpful when working under a lot of artificial lighting.

The keyboard area is a single piece of plastic and there isn't any flex in the keyboard even with rigorous typing. The keys have comfortable travel, are well spaced, and have three levels of backlighting. The size of the trackpad is fairly generous and tracking is smooth. You get a fingerprint sensor in the top-right corner of the trackpad, which worked well for us.

The Asus VivoBook 14 offers a good selection of physical ports, but we wish it had a full-sized SD card reader

The Asus VivoBook 14 offers a decent selection of ports for a 14-inch laptop. You get two full-sized USB ports (one USB 2.0 and a second USB 3.1 Gen1), a USB Type-C port, an HDMI output, a headphone/ microphone combo port, and a microSD card slot. The latter is a little disappointing to see as we would have found more use for a full-sized SD card slot. Oddly, even the 15-inch model of this series doesn't have a full-sized one.

There are two stereo speakers, placed at the bottom, on either side of the laptop. You also get a few air vents here but in order to access the RAM or storage devices, you'll have to remove the entire bottom panel as there's no quick-access hatch. In the box, the laptop ships with a few manuals and a 45W charger. The charger is a tiny, square brick which is extremely portable.

The VivoBook 14 is available with either a Core i3 or a Core i5 Intel CPU. Our review unit — the Asus Vivobook 14 X412FA — featured an Intel Core i5-8265U 8th generation quad-core CPU with 8GB of RAM and a 512GB SSD. In some markets, the VivoBook 14 is also available with an optional 1TB hard disk in addition to the SSD, but Asus has confirmed to Gadgets 360 that it doesn't plan to bring these models, or the one with Core i3 CPUs to India. However, you can opt for a model with an Nvidia GeForce MX230 graphics card, which is currently being sold in here.

The 8GB of reported system memory is a combination of 4GB of soldered RAM and a 4GB RAM module (according to CPUz app). You can swap an 8GB module into the sole slot, which will increase the total system RAM to a maximum of 12GB. Wireless connectivity on the Asus VivoBook 14 comes in the form of dual-band Wi-Fi 802.11ac and Bluetooth 4.2.

This Asus VivoBook 14 ships with Windows 10 Home 64-bit, and in addition to some of the pre-installed Windows Store apps, you also get a trial version of McAfee LiveSafe antivirus and some apps from Asus. Asus Sync lets you receive notifications of calls and SMS notifications from your phone on your laptop, similar to Dell's Mobile Connect. It also lets you compose and send SMS messages. The MyAsus app is your one-stop-shop for updating drivers, changing the display's colour profile, changing battery charging settings, and cleaning up junk files. The app is well designed and easy to use.

The VivoBook 14 makes for a very good portable work laptop. Its compact size and low weight make it very easy to slip in and out of most backpacks, and the SSD ensures that Windows is quick to resume from sleep whenever you need it. The fingerprint sensor adds an extra layer of convenience, which we appreciate.

The HD camera isn't too bad when used indoors, and footage we took wasn't noticeably grainy even with only dim ambient lighting. However, what really makes this a good work laptop is that comfortable keyboard. The keys aren't too noisy, the backlighting is easy to toggle on or off, and the good size and positioning of the trackpad means we didn't have to deal with unwanted touches when typing.

For multimedia use, the VivoBook 14 falls a bit short primarily due to the display's inability to produce very vibrant colours. Brightness is more than adequate but the panel simply doesn't have a wide dynamic range, so colours tend to look dull and blacks are not distinct enough. This isn't ideal when watching movies or TV shows with predominantly dark scenes.

The Asus VivoBook 14 is comfortable to use, even for long typing sessions

Vertical viewing angles are narrow too, and even a slight tilt away from the sweet spot causes colours and contrast to change. We tried Asus's ‘Vivid' colour profile and ‘Tru2Life' video enhancement feature in the MyAsus app, but neither of them made any major difference.

The stereo speakers are quite weak too. Even at full volume, we sometimes had to struggle to hear dialogue in videos or the sounds being played in various apps.

Since we received the model without a dedicated graphics card, we weren't expecting much in terms of gaming performance. Heavy titles such as Shadow of The Tomb Raider struggled to even load, despite turning the resolution and graphics settings down. We had better luck with more casual titles such as Asphalt 9: Legends from the Windows Store. Benchmark numbers aren't stellar, but considering the mid-range CPU and lack of a GPU, that wasn't surprising.

PCMark 10 returned a score of 3,505 points while 3DMark Fire Strike gave us just 1,119 points. The File System benchmark in SiSoft Sandra showed promise thanks to the PCIe NVMe SSD. Both sequential and random read bandwidth were in the Gigabit per second range, while write bandwidth hovered around 930MB/s.

We finally come to battery life, which is a little weak considering that this laptop only has a 2-cell, 37WHr battery. In the stressful Battery Eater Pro benchmark, the VivoBook 14 X412FA lasted for 2 hours and 35 minutes, which is surprisingly decent.

However, with actual day-to-day use, the Asus VivoBook 14 averaged only around 4.5-5 hours with medium to light workloads. This was with the keyboard backlight on, intermittent audio streaming over Bluetooth, and the display brightness set to around 70 percent. We found it tough to stretch a full charge for an entire workday, so at some point, you will need to charge this laptop if you're using it non-stop.

Verdict
The Asus VivoBook 14 hits the sweet spot, for the most part, when you consider the features and performance you get for this price. The model we reviewed has an official selling price (MOP) of Rs. 54,990 but this does fluctuate a bit with offers and during sales, which can bring it lower to even Rs. 48,990, which is what it's going for currently. It's tough to find any other 14-inch laptop with these specifications at this online price. Add to that, the excellent build quality, modern design, and compact size, and you have yourself a very good work laptop.

One of its shortcomings is the slightly dull display, which isn't the best for watching videos, so it's not ideal for multimedia use. Battery life, while decent for the capacity, could have been better, and we would have preferred a full-sized SD card slot instead of a microSD one.

If you're looking for better gaming performance, then you can get the X412FJ-EK177T model with an Nvidia GeForce MX230 GPU for Rs. 59,990. Asus also has a VivoBook 15 series, with very similar configurations as the 14 series, all priced under Rs. 60,000, in case you want a larger display.

Overall, the Asus VivoBook 14 ranks high on our recommendation list if you're looking for a compact Ultrabook with fast and ample storage at a reasonable price.