The pricing for these Asus accessories have not been revealed. 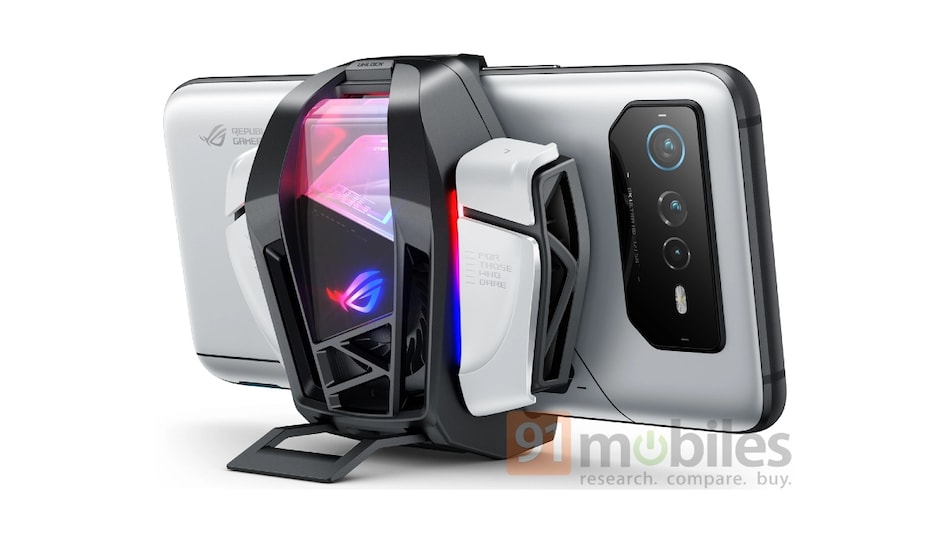 Asus ROG Phone 6 is confirmed to launch globally alongside the ROG Phone 6 Pro on July 5. This next-generation gaming smartphone is said to be packed with top-end specs, including a Qualcomm Snapdragon 8+ Gen 1 SoC with up to 18GB of RAM and up to 1TB of onboard storage. Now, a new report has surfaced that hints that the Asus ROG Phone 6 will be accompanied by the AeroActive Cooler 6 snap-on cooling fan for preventing the handset's temperatures from reaching unbearable levels during extended gaming sessions.

A report by 91Mobiles showcases the supposed design of the AeroActive Cooler 6 for the Asus ROG Phone 6. The snap-on cooling fan is depicted to boast RGB lighting as well. The report also mentions that the Devilcase Guardian Lite Plus will also be released alongside the ROG Phone 6 lineup. This protective case is said to feature a large cutout for the rear camera module. There is no information available regarding the pricing of these optional Asus accessories.

The Asus ROG Phone 6 is reportedly under testing in India as well. This gaming smartphone is tipped to soon be available in the country exclusively on Flipkart. Asus has been teasing several of its features in the build-up to the July 5 launch. The company recently revealed that the Asus ROG Phone 6 boasts an IPX4 rating, supposedly making it the world's first water splash-resistant gaming smartphone.

According to a past report, the ROG Phone 6 is tipped to offer a 6.78-inch full-HD+ OLED with a 165Hz refresh rate. It is expected to be powered by a Snapdragon 8+ Gen 1 SoC coupled with up to 18GB of RAM and a maximum of 1TB onboard storage. The handset is said to feature a 64-megapixel primary sensor with optical image stabilisation (OIS). It is supposed to house a 6,000mAh with support for 65W fast charging.

Nothing Phone 1 May Sell Offline via Reliance Digital Along With Invite-Only Pre-Order Pass System on Flipkart
Toshiba Board Gains 2 Directors From Activist Hedge Funds, in Historic Shift