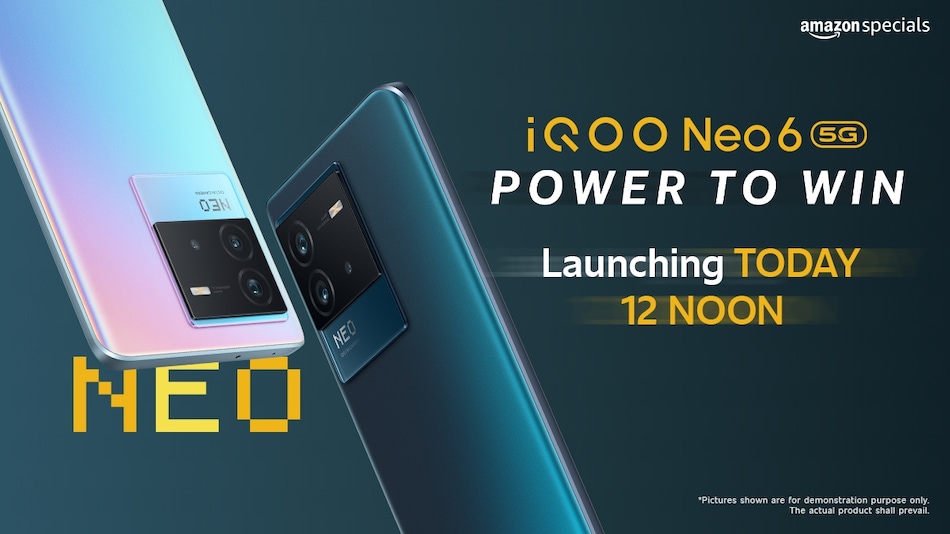 iQoo Neo 6 is set to launch in India later today. The company's latest smartphone will debut as part of its Neo series, that is targeted at gamers. It will be powered by a Snapdragon 870 SoC under the hood, unlike the Chinese variant of the iQoo Neo 6, which is equipped with a Snapdragon 8 Gen 1 SoC. The handset is confirmed to sport a 120Hz E4 AMOLED display, with 1,300 nits peak brightness. The iQoo Neo 6 will offer 80W FlashCharge support, which is claimed to charge the battery up to 50 percent in 12 minutes.

iQoo Neo 6 India launch will take place at 12:00pm (noon) today. The event will be livestreamed on the official iQoo India YouTube channel, and you can also watch it live from the video embedded below.

iQoo Neo 6 price in India is speculated to be more than Rs. 29,000 for the base model, while the high-end model is tipped to be priced over Rs. 31,000. iQoo's upcoming smartphone is tipped to be available in Dark Nova and Interstellar colour options.

According to details shared on a dedicated microsite ahead of the launch of the iQoo Neo 6, the upcoming smartphone will be powered by a Snapdragon 870 SoC. The handset is also confirmed to sport an E4 AMOLED display with a 120Hz refresh rate and a 360Hz touch sampling rate. The smartphone will be equipped with a liquid cooling vapour chamber for improved thermal management while gaming.

For photos and videos, the smartphone is tipped to feature a triple rear camera setup featuring a 64-megapixel primary camera, an 8-megapixel secondary camera and 2-megapixel tertiary camera, along with an 8-megapixel front-facing selfie camera. The iQoo Neo 6 is also expected to pack a 4,700mAh battery, while the microsite on Amazon reveals that it will come with 80W FlashCharge support, which is said to charge the smartphone up to 50 percent in 12 minutes.