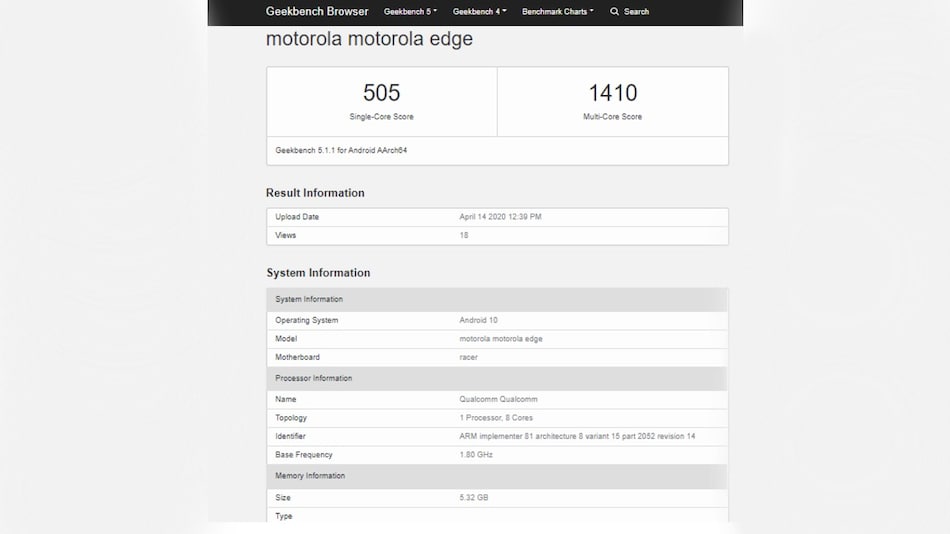 Motorola Edge series is expected to be launched on April 22

As per the recent Geekbench listing, the Motorola Edge is likely to pack 6GB RAM and run on Android 10. The phone is listed to be powered by a 1.8GHz Qualcomm octa-core processor, and previous leaks claim that it may be the Snapdragon 765 or Snapdragon 765G SoC. The Motorola Edge phone achieved a single-core score of 505 points, and a multi-core score of 1,410 points.

To recall, the Motorola Edge+ Geekbench listing had tipped 12GB RAM and a 1.8GHz octa-core processor.

The Motorola flagship launch event on April 22 will be held online at 11am CDT (9:30pm IST). The Motorola Edge+ is expected to feature a 6.67-inch full-HD+ (1,080x2,340 pixels) display along with a hole-punch design. It is also rumoured to have a 5,170mAh battery. The Motorola Edge, on the other hand, is tipped to feature a curved 6.67-inch full-HD+ (1,080x2,340 pixels) display. The phone is expected to offer 128GB of onboard storage, and is also rumoured to come with a 48-megapixel primary camera sensor.