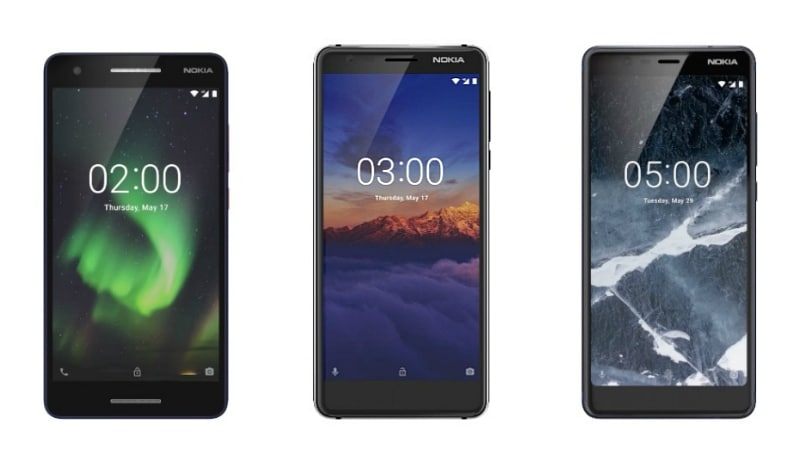 Nokia 2.1, a new variant of Nokia 3.1, and Nokia 5.1 were launched in India on Thursday. Nokia licensee HMD Global is expected to launch the Nokia 6.1 Plus or Nokia 5.1 Plus in India later this month, but ahead of the event, the company has added three new handsets in its India lineup. The three smartphones, also known as Nokia 2 (2018), Nokia 3 (2018), and Nokia 5 (2018), are the successors to the Nokia 2, Nokia 3, and Nokia 5, and were first unveiled in May this year. However, HMD Global had only launched a 2GB RAM/ 16GB storage variant of the Nokia 3.1 in India last month.

Notably, the Nokia 3.1 and Nokia 5.1 sport 18:9 displays, and are part of Google's Android One initiative that promises an optimised stock Android experience and quick updates. Meanwhile, the Nokia 2.1 comes with a 16:9 panel and runs Android 8.1 Oreo (Go edition). Ajey Mehta, Vice President and Country Head, India, HMD Global, said, "With this range, we deliver larger screens, enhanced performance across our range with processor upgrades offering up to 50 percent higher performance while maintaining the perfect balance with power consumption and stunning designs - all in a segment where consumers often need to compromise. With our renewed portfolio, you can now enjoy a premium smartphone experience without paying a premium on the price."

The Nokia 2.1 has been priced at Rs. 6,999 in India. It will come in three metallic colour variants - Blue/Copper, Blue/Silver and Grey/Silver. Meanwhile, the Nokia 3.1 now comes in a new 3GB RAM/ 32GB storage variant. The new variant has been priced at Rs. 11,999. It will also be available in three colour options - Blue/Copper, Black/Chrome and White/Iron. On the other hand, the new Nokia 5.1 comes in a 3GB RAM/ 32GB storage variant in India and has been priced at Rs. 14,499. It will come in three classic colour variants - Copper, Tempered Blue, and Black, though the Black model will be available a few weeks later. All three smartphones will go on sale from August 12 via major mobile retailers and online via Paytm Mall and Nokia's online store.

Launch offers for all three smartphones include: 10 percent cashback on Paytm recharges, bill payments, when scanning the Paytm Mall QR code at retail outlet; 5 percent cashback on ICICI credit and debit cards (for Nokia 3.1 or Nokia 5.1 only). The company has also detailed bundled offers for Idea and Vodafone.

The Nokia 2.1 runs Android Oreo (Go edition) out-of-the-box, and sports a 5.5-inch HD (720x1280 pixels) display with a 16:9 aspect ratio and anti-FP coating. The phone is powered by a Qualcomm Snapdragon 425 SoC, coupled with 1GB of LPDDR3 RAM. There is a 4000mAh battery under the hood that comes with a claimed 2-day battery life.

In terms of camera specifications, the Nokia 2 (2018) bears a single 8-megapixel rear sensor with autofocus and an LED flash. As for the front, the smartphone gets a 5-megapixel fixed focus selfie camera. Internal storage on the handset is capped at 8GB, expandable via microSD card (up to 128GB).

The Nokia 3.1 runs Android 8.0 Oreo, as part of the Android One programme, out-of-the-box. It sports a 5.2-inch HD+ (720x1440 pixels) display with an 18:9 aspect ratio and Corning Gorilla Glass protection. The handset is powered by an octa-core MediaTek MT6750 SoC, coupled with up to 3GB of RAM.

In terms of optics, the Nokia 3 (2018) gets a 13-megapixel rear camera with f/2.0 aperture, autofocus, and an LED flash. On the front, the smartphone bears an 8-megapixel fixed focus sensor with f/2.0 aperture and an 84.6-degree field-of-view. There is up to 32GB inbuilt storage, expandable via microSD card (up to 128GB). As for the battery, the phone gets a 2990mAh battery powering the internals from under the hood.

Connectivity on the Nokia 3.1 consists of 4G LTE, Wi-Fi 802.11ac, Bluetooth 5.0, GPS/ A-GPS, GLONASS, Beidou, a 3.5mm headphone jack, and a Micro-USB port. Sensors on the handset include accelerometer, ambient light sensor, gyroscope, magnetometer, and proximity sensor. Dimensions of the phone are 146.25x68.65x8.7mm and weight is 138.3 grams.

The Nokia 5.1 runs Android Oreo, based on Android One, out-of-the-box. It sports a 5.5-inch full-HD+ (1080x2160 pixels) IPS LCD display with an 18:9 aspect ratio and Corning Gorilla Glass 3 protection. The smartphone is powered by an octa-core MediaTek MT6755S SoC, which comes paired with 3GB of RAM.

In the camera department, the Nokia 5 (2018) gets a single 16-megapixel rear sensor with PDAF and an LED flash. As for the selfie camera, the phone has an 8-megapixel fixed focus lens. There is a 3000mAh battery under the hood. Inbuilt storage on the Nokia 5.1 is capped at 32GB, although expandable via microSD card (up to 128GB).