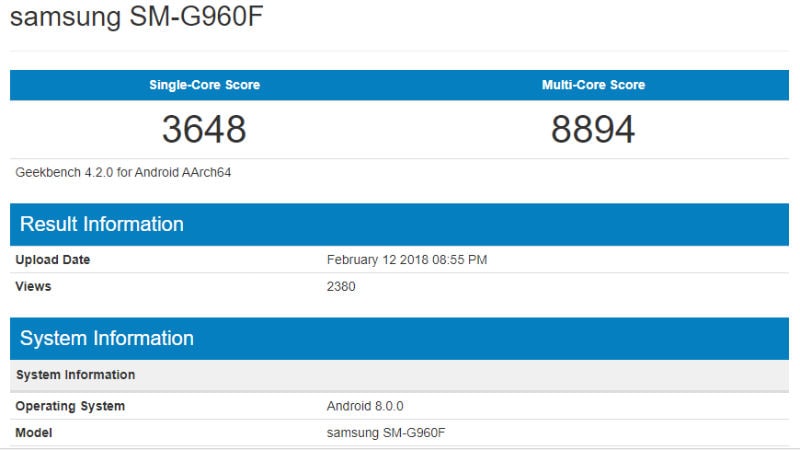 Samsung Galaxy S9 and Galaxy S9+ have become the most talked about smartphones ahead of MWC 2018. While Samsung is set to host its Galaxy Unpacked event in Barcelona later this month, speculations are rife about its next flagship handsets. In the latest leak, the Samsung Galaxy S9 has been spotted on Geekbench, a popular benchmarking website.

While Samsung has not revealed too many details regarding its upcoming smartphone range, we know that the new Galaxy handsets will be launched on February 25. Less than two weeks ahead of the release, the Galaxy S9 has popped up Geekbench, showcasing impressive numbers. The smartphone with the model number "SM-G960F" shows some specifications of the Galaxy S9, including the processor and RAM.

As per Geekbench, the Galaxy S9 sports an Exynos 9810 processor that with 4GB of RAM delivered results of 3648 for single core and 8895 for multi-core performance. The CPU of the new Exynos SoC will have eight cores.

Samsung had announced the new Exynos 9 Series 9810 SoC built on its second-generation 10nm FinFET process technology in January this year. The South Korean giant had claimed that the Exynos 9 Series 9810 is its most innovative mobile processor yet, meant for AI applications and richer multimedia content. Notably, the Galaxy S9 and Galaxy S9+ are also expected to be powered by the recently unveiled Qualcomm Snapdragon 845 SoC in some regions. According to a report, the Qualcomm Snapdragon 845 SoC has scored an average of 31 percent higher absolute performance compared to its predecessor.

In other specifications, the smartphone will run Android Oreo, according to the benchmarking report. Notably, there have been several other leaks and rumours around the smartphone lineup.

Interestingly, a user manual has surfaced on Samsung's official website revealing a new wireless charger that has seemingly been designed for the Galaxy S9. The upcoming Samsung wireless charger will reportedly be available in Black and White colour variants at a price of around EUR 75 (roughly Rs. 5,900).