This Samsung offer is available at retail stores across India. 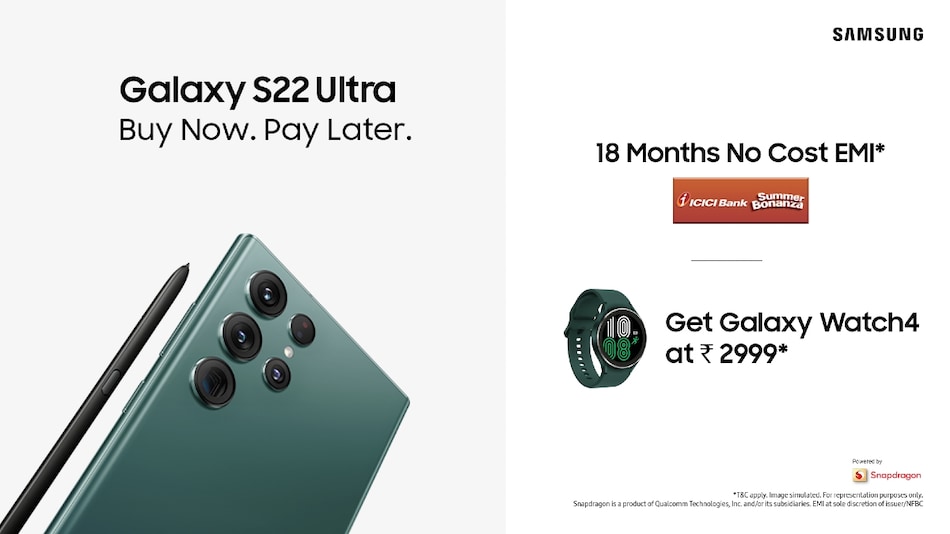 Samsung introduced its Buy Now, Pay Later option for the first time for its flagship and foldable smartphones in India on Wednesday. ICICI Bank credit card holders with a minimum credit limit of Rs. 1,50,000 will be able to benefit from this offer at retail outlets across India. This scheme also gives the option of zero down payment and a processing fee of 1 percent. The company has confirmed that this offer is available on Galaxy Z Fold 3, Galaxy Z Flip 3, and Galaxy S22 series smartphones.

The new Buy Now, Pay Later option enables Samsung customers to pay 60 percent of the total amount in 18 no-cost EMI monthly instalments. The remaining 40 percent can be repaid in a lump sum with the 19th instalment.

In addition to the Buy Now, Pay Later offer, customers who go for either the regular Galaxy S22 or the Galaxy S22+ can also buy the Galaxy Buds 2 for Rs. 2,999. Both of these smartphones are powered by a Snapdragon 8 Gen 1 SoC and run on Android 12-based One UI 4.1.

Customers who purchase the Galaxy S22 Ultra can get the Galaxy Watch 4 for an additional Rs. 2,999. The Galaxy S22 Ultra is a flagship Samsung smartphone that runs on Android 12 with a One UI 4.1 skin on top. It sports a 6.8-inch Edge QHD+ Dynamic AMOLED 2X display with a refresh rate of 1Hz to 120Hz. The handset is powered by a Snapdragon 8 Gen 1 SoC paired with up to 12GB of RAM. It features a quad rear camera setup headlined by a 108-megapixel primary sensor. There is also a 40-megapixel selfie shooter on the front.