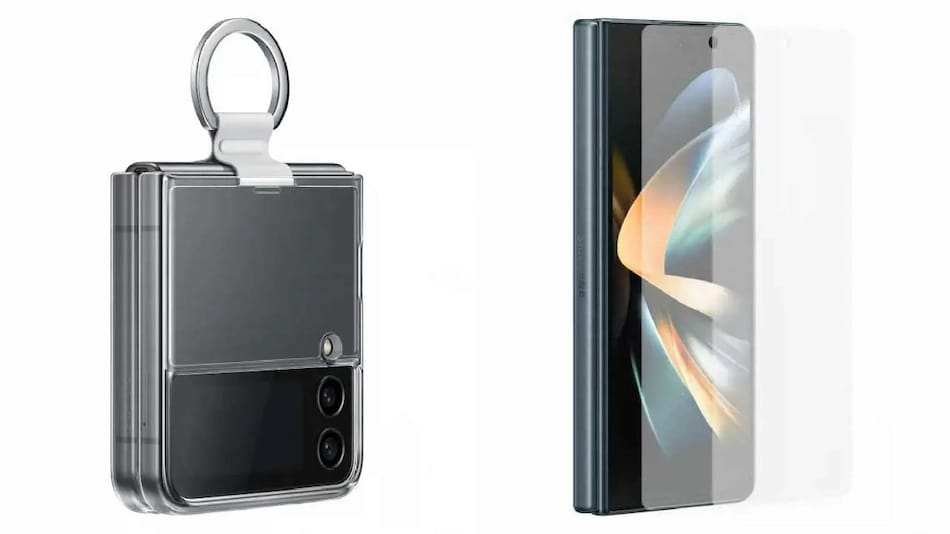 Samsung Galaxy Z Fold 4 and Galaxy Z Flip 4 alleged accessories images have been leaked online showing the smartphones' design. There is no visible difference in the phone's design in the new images and they look identical to renders that have been shared multiple times in the past. The accessories of the phones include cases and display protection (screen guards). Both the foldables phones are available for pre-booking in India ahead of their launch at the Galaxy Unpacked event on August 10.

As per the images secured by MySmartPrice, the Samsung Galaxy Z Fold 4 accessories include front protection film, silicone grip cover, standing cover, and a standing cover with pen. The Galaxy Z Flip 4 accessories include clear cover, flap leather cover, and silicone cover with strap. The prices of the covers are said to start from EUR 20 (roughly Rs. 1,600) and go up to EUR 90 (roughly Rs. 7,300). The screen guard for the Galaxy Z Fold 4 is reportedly priced at EUR 15 (roughly Rs. 1,200).

The Galaxy Z Fold 4 shows a triple rear camera setup, which is vertically aligned with the LED flash at the bottom. The Galaxy Z Flip 4 can be seen with a dual-rear camera setup. Both Samsung handsets are hinted to feature volume rockers on the right spine along with a side-mounted fingerprint sensor.

Samsung has announced that it has started pre-reservation of the Next Galaxy smartphones, which are likely to be the Galaxy Z Fold 4 and Galaxy Z Flip 4 foldable smartphones, in India from July 31. You can pre-reserve the smartphones by paying a token amount of Rs. 1,999 and get additional benefits of Rs. 5,000 after delivery of the devices. The South Korean company is holding the Galaxy Unpacked event on August 10 and the event will be streamed live in India from 6:30pm IST.