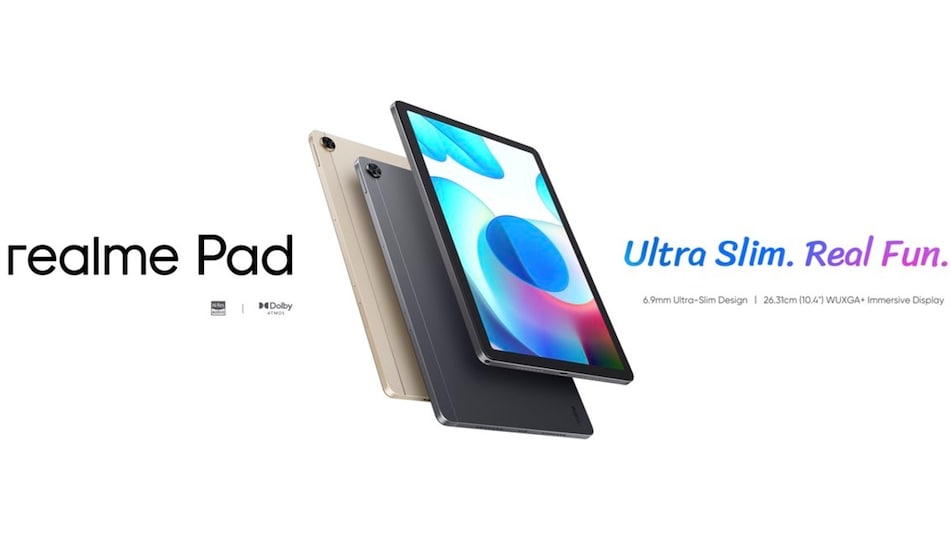 Realme Pad comes with a screen-to-body ratio of 82.5 percent

Realme Pad with a slim design and quad speakers was launched in India on Thursday through a virtual launch event. The company's first tablet is powered by an octa-core MediaTek Helio G80 SoC and supports Dolby Atmos sound. Realme Pad also comes with fast charging support and has Wi-Fi-only or Wi-Fi + 4G variants to choose from. In addition to Realme Pad, Realme at its virtual launch announced the arrival of Realme Cobble and Realme Pocket portable Bluetooth speakers in the country. Both models come in two distinct colour options and carry an IPX5 water-resistant design.

Realme Pad price in India has been set at Rs. 13,999 for the Wi-Fi only variant that will solely be available in 3GB + 32GB storage configuration. The tablet also has a 3GB + 32GB option for the Wi-Fi + 4G variant that is priced at Rs. 15,999, while the top-of-the-line 4GB + 64GB model with Wi-Fi + 4G connectivity carries a price tag of Rs. 17,999. All three options will be available in Real Gold and Real Grey colours. On the availability part, the Wi-Fi + 4G models of Realme Pad will go on sale starting 12pm (noon) on September 16 through Flipkart, Realme.com, and major offline retailers. Details about the availability of the Wi-Fi only variant are yet to be announced.

Customers purchasing Realme Pad through HDFC Bank card or Easy EMI transactions are entitled to receive up to Rs. 2,000 of instant discount. ICICI Bank credit card customers will also get a Rs. 1,000 discount.

Realme Cobble and Realme Pocket were initially launched in Malaysia earlier this year with a price tag of MYR 99 (roughly Rs. 1,800) and MYR 97 (roughly Rs. 1,700), respectively.

The Realme Pad tablet runs on Android 11 with a new Realme UI for Pad skin on top. The tablet features a 10.4-inch WUXGA+ (2,000x1,200 pixels) display that has a screen-to-body ratio of 82.5 percent. The display is also capable of reducing its brightness to as low as 2 nits under a preloaded Night Mode to cut down eye fatigue under dark. It also has a Dark Mode to reduce the screen brightness to some extent and a Sunlight Mode to switch to the screen's maximum brightness when using outdoors. Under the hood, there is the MediaTek Helio G80 SoC, along with up to 4GB RAM and up to 64GB of onboard storage. Realme Pad features an 8-megapixel camera at the front, with an ultra-wide lens that has a field-of-view (FoV) of 105 degrees.

For designing Realme Pad, the company used an aluminium body that has a thickness of 6.9 millimetres and weigh 440 grams.

Realme Pad comes with four dynamic speakers that are powered by Dolby Atmos and Hi-Res audio technologies. There are also dual microphones to enable noise cancellation during video calls and while attending online conferences.

To deliver a deeper ecosystem integration, Realme has pre-installed its Smart Connect feature on Realme Pad that allows consumers to use their Realme Band or Realme Watch to unlock the tablet. There is also a Nearby Share feature to let users share files and images between their Realme phones and the tablet. Realme Pad has an Open-up Auto Connection feature that lets users connect their earbuds with the tablet when they are in a proximity.

The new Realme Cobble Bluetooth Speaker comes with a 5W dynamic bass boost driver that is paired with an additional passive radiator. The speaker supports stereo pairing over Bluetooth and comes with three preset equalisers for a customisable audio experience. Further, there is a super-low latency game mode that offers wireless audio transfer with a latency rate of 88 milliseconds. Realme Cobble comes with Bluetooth v5 connectivity and includes a Type-C charging port.

Realme has provided a 1,500mAh battery on the Cobble speaker that is claimed to deliver up to nine hours of usage on a single charge. Besides, the speaker weighs 200 grams and comes with an IPX5 build.

Realme Pocket Bluetooth Speaker comes with a 3W dynamic boost driver along with a passive radiator and is paired with a Bass Boost+ enhancement. The speaker includes three preset equalisers and features touch controls. It also offers Bluetooth v5 connectivity and has a USB Type-C charging port.

Equipped with a 600mAh battery, Realme Pocket is claimed to deliver six hours of playback time on a single charge. It measures 101x60.9x33mm and weighs 113 grams.