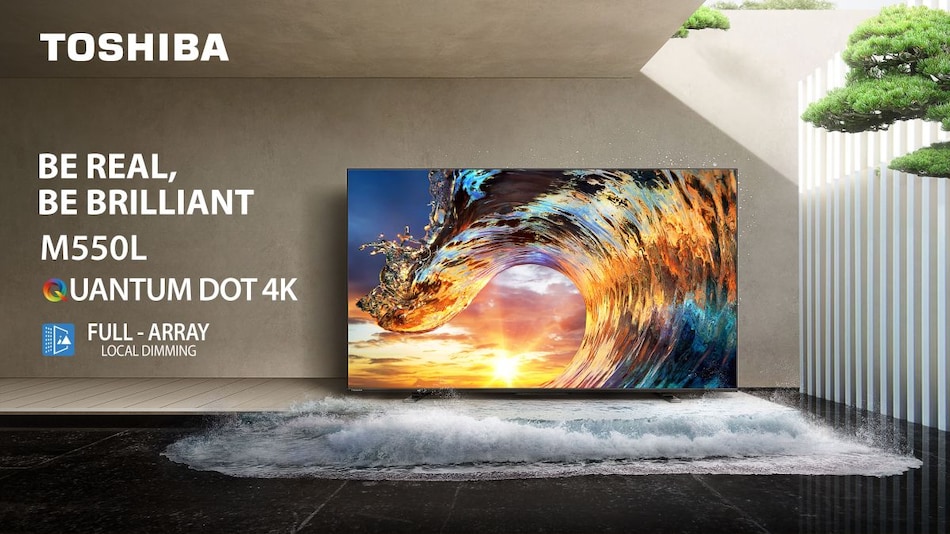 Toshiba M550 and C350 series of 4K televisions with Google TV were launched in India last week. According to the company, the M550 television is available in 55-inch and 65-inch sizes via Flipkart, and the C350 is available in 43-inch and 55-inch sizes via Amazon. A 50-inch variant of the C350 will also be sold via Flipkart. The M550 television features Quantum Dot with Full Array Dimming that is said to deliver over a billion shades of realistic colours, Toshiba claims. It also gets Bazooka Woofer, Far Field Voice Control, and Regza Engine 4K Pro AI Picture optimiser.

Toshiba M550 television features Quantum Dot tech with Full Array Dimming, which is claimed to deliver over one billion shades of realistic colours. The television gets a built-in 2.1 audio channel with a 20W Bazooka Woofer at the back that is said to deliver “pure exciting sound with power bass woofer” for an enhanced audio experience. On either sides, it gets 10W speakers. The company claims that it generates a 40W “powerful” sound. The M550 also gets Far Field Voice Control feature that lets users change volume, change content, and control the television with just their voice. It also features Regza Engine 4K Pro, a game mode with auto low latency mode, and variable refresh rate.

Both the 4K televisions, M550 and C350, get the latest Google TV OS. They both feature built-in Chromecast support, along with Apple Home Kit and Apple Air Play.

On the launch, Rishi Tandon, COO at Toshiba Television, said, ‘'We at Toshiba has changed our strategy with the introduction of 4K AI Google TV with the amalgamation of Japanese quality and craftsman ships to provide consumers an unmatched TV viewing experience, we are thrilled to introduce two new 4K Google TV series C350 and M550 (Fully Array Quantum Dot) in India.”