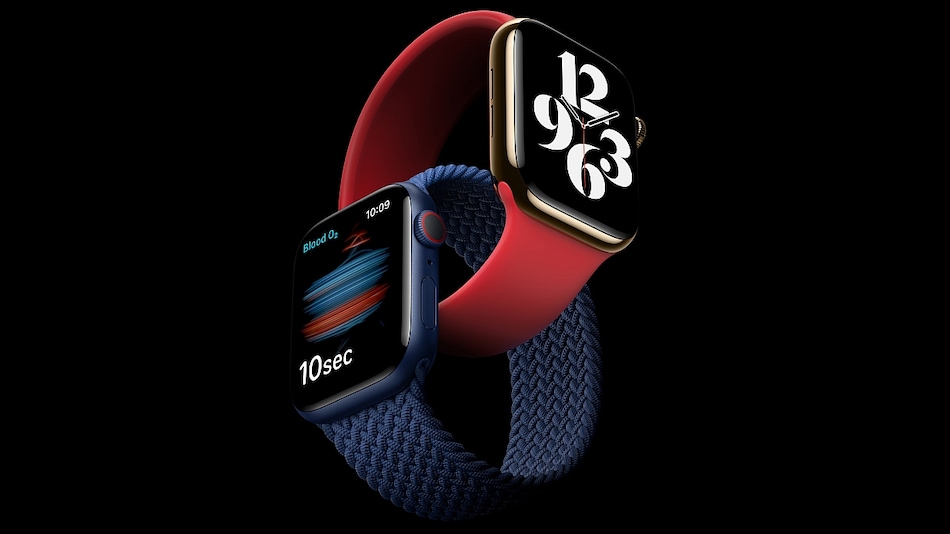 Apple Watch Series 6 shares the design language of its predecessors

Apple Watch Series 6 has been unveiled by Apple at its virtual “Time Flies” event. The new smartwatch by the Cupertino giant looks quite similar to the Apple Watch Series 4 and Series 5 models. However, it does bring new hardware that is touted to deliver faster performance, better water resistance, and enhanced wireless connectivity, as per the company. The Apple Watch Series 6 is also the first in the lineup to measure blood oxygen levels. Additionally, there are new colour options to attract a larger audience.

Another major related announcement was Apple Fitness+, a fitness service that syncs with your watch to show your Apple Watch Metrics alongside a growing library of music-based workout videos. The new Apple Watch lineup will notably also come without AC adapters in the box, as part of Apple's 2030 environment pledge.

Apple Watch Series 6 price in India starts at Rs. 40,900 for the GPS variant, while the Apple Watch Series 6 (GPS + Cellular) option comes with a price starting at Rs. 49,900. Both options will be available for purchase in India in 40mm and 44mm sizes. India availability has not yet been detailed beyond "coming soon".

The Apple Watch Series 6 comes in 40mm and 44mm case options that both have a ceramic and sapphire crystal back finish and come in aluminium, stainless steel, titanium, and ceramic materials. The smartwatch is powered by a new Apple S6 SiP (system in package), which is claimed to be up to two times faster than the S5 processor available on the Apple Watch Series 5. There is also a W3 wireless chip for seamless connectivity with Apple devices. Furthermore, the Series 6 is the first in its family to come with an ultra-wideband (UWB) technology and the U1 chip that enable connectivity using radio waves in a short range.

Apple has provided an always-on Retina display on the Apple Watch Series 6 that has a refresh rate of up to 60Hz. The display is also touted to have a peak brightness of 1,000 nits. The 40mm Apple Watch Series 6 comes with a resolution of 324x394 pixels, whereas its 44mm variant has 368x448 pixels. It also features a better Always-On Retina display, said to be 2.5 times brighter than the previous model outdoors (when the user's wrist is down). It also features an always-on altimeter/

In terms of health and wellness tracking, Apple Watch Series 6 now lets users measure their blood oxygen saturation (SpO2) thanks to the new health sensor that uses infrared light and photodiodes to detect colour of blood under the skin calculate blood oxygen saturation. Users will receive an alert if their blood oxygen levels drop below the reference figure between 95 and 100 percent. The smartphone also retains the electrical heart sensor that first debuted on the Series 4 and is designed to record heartbeat and rhythm. It can detect atrial fibrillation (AFib) and can provide an electrocardiogram (ECG) report.

Users will get an optical heart rate monitor that also provides high and low heart rate notifications, apart from an irregular heart rhythm notification. Fall detection, emergency SOS, international emergency calling, and other safety features also make their way to the new Apple Watch SE, however, Blood Oxygen and the ECG apps do not. There is no electrical heart sensor onboard either. It is said to provide 18 hours of battery life. It will be available in 40mm and 44mm cases, with Gold, Silver, and Space Gray aluminium finishes.

The company also unveiled watchOS 7's Family Setup, due to arrive later this year which allows family members to better take of children and the elderly, by allowing them to use an Apple Watch without an iPhone. Once the watch has been set up, parents will be able to control who their children message, get location notifications, and other safety features. The standalone Apple Watch in Family Setup requires a cellular Apple Watch Series 4 or later model. It will be available with select telecom carriers and limited countries at launch.

Apple Fitness+ will be available from the end of the year, and is priced at $9.99 (roughly Rs. 700) per month, or $79.99 (roughly Rs. 5,900) per month, with a 1-month free trial. It is part of the Apple One subscription bundle. The company also announced 3 months free Apple Fitness+ with new Apple Watch Series 3 or later purchases. The company will be launching Fitness+ with 10 workout types, including yoga, cycling, dance, treadmill walk/ run, strength, core, hit, rowing, and mindful cooldown workout types. You can also sync the music featured in workout videos with your Apple Music account, to hear them later. It will be launched in Australia, Canada, Ireland, New Zealand, the UK, and the US initially.