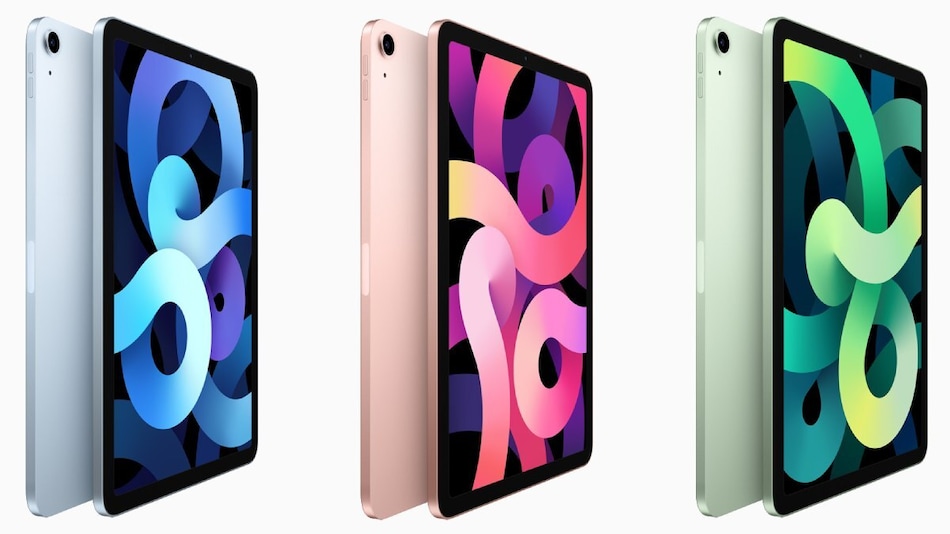 Apple has updated the iPad Air with an all-new design, larger display, and powerful new processor. The new iPad Air (4th Gen) borrows heavily from the iPad Pro line but incorporates some new improvements and achieves a more approachable price point, between the iPad Pros and entry-level iPad. The new iPad Air is available in five colours: Silver, Space Grey, Rose Gold, Green, and Sky Blue. The W-Fi 64GB model is priced at Rs. 54,900 while 256GB will cost Rs. 68,900. The cellular 64GB model will cost Rs. 66,900, going up to Rs. 80,900 for 256GB. In the US, the starting prices for Wi-Fi and cellular are $599 and $729 respectively. It will go on sale in October.

The new design occupies roughly the same footprint as the previous-gen iPad Air, but allows for a larger 10.9-inch screen with no physical Home button, rather than a 10.5-inch screen. There's still a Touch ID fingerprint sensor rather than Face ID cameras. The sensor has been integrated into the power/ standby button. The sides are flat, much like the current iPad Pro and rumoured iPhone 12 series.

Apple touts the quality of its liquid retina display, which has a resolution of 2360x1640 pixels and is fully laminated with an anti-reflective coating. It supports the P3 wide colour gamut and Apple's True Tone colour adjustment feature.

The company has used an industry-first 5nm manufacturing process to fit 11.8 billion transistors into the A14 Bionic SoC as well as improve power efficiency. The next-generation 16-core neural engine, plus new CPU-bound machine learning acceleration, are said to account for 70 percent faster machine learning operations.

As heavily rumoured, the new iPad Air features a USB Type-C port rather than Apple's proprietary Lightning connector, for data transfers at up to 5Gbps which is said to be 10X faster. A 20W Type-C charger and cable are included in the box. The iPad Air supports external storage devices and up to a 4K monitor through the Type-C port. Wi-Fi 6 and 60 percent faster LTE with a Nano-SIM or eSIM (on cellular models) are also supported, in addition to iBeacon microlocation.

Other features include stereo speakers, a 7-megapixel front-facing camera with 1080p video recording and better low-light performance, and the same 12-megapixel rear camera as the iPad Pro with focus pixels and stabilised 4K video recording. The new iPad Air supports the 2nd Gen Apple Pencil and has a magnetic connector to charge and store it. The new tablet also works with Apple's Magic Keyboard and third-party accessories featuring integrated trackpads.

Apple also refreshed its entry-level iPad, marking the 10th anniversary of the lineup. The new model is priced starting at Rs. 29,900 and Rs. 37,900 for the 32GB and 128GB Wi-Fi versions respectively, and Rs. 41,900 and 49,900 for the cellular versions in the same capacities. In the US, the starting prices are $329 and $459 respectively. It will be available soon, though no date has been announced, in Silver, Space Grey, and Rose Gold. Apple says the iPad is one of the most successful consumer products ever, with over 500 million sold, and more than half of purchases coming from first-time buyers.

The new iPad (8th Gen) retains Apple's classic iPad design with a physical Home button and 10.2-inch Retina display, but a new A12 Bionic processor that's said to be 40 percent faster than the previous generation. Apple promises 2X faster graphics in a package that outperforms today's popular laptops and Chromebooks, as well as Android tablets. The A12 Bionic SoC brings Apple's Neural Engine capabilities for machine learning to the most popular and affordable iPad model for first time, driving new app experiences.

Both iPad models will ship running iPadOS 14, which will be released to older iPads as a software update on September 16. Apple also announced the new Apple Watch Series 6 and Apple Watch SE, Apple One subscription bundle, and Apple Fitness+ exercise and training service at its virtual event.