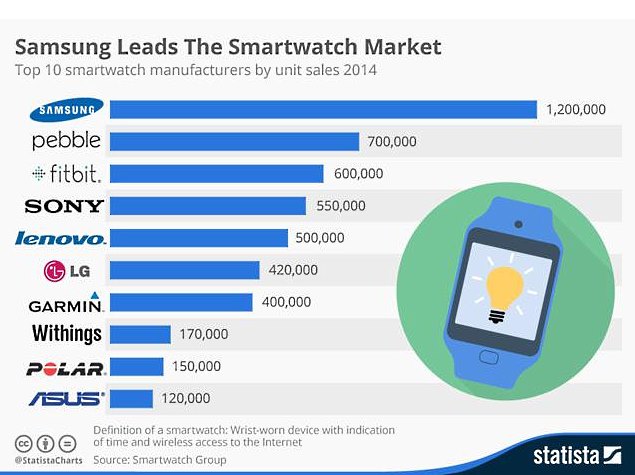 Samsung holds number one position in terms of global smartwatch sales in 2014, according to market research firm Statista, with 1.2 million smartwatches sold.

According to latest data by the research firm, Samsung leads the smartwatch market with 1.2 million unit sales and 17.65 percent market share. On second position, the kickstarter Pebble sold 700,000 units of all Pebble smartwatches, claims Statista.

Last month, market research firm Canalys had claimed that Google's Android Wear platform saw rather poor sales in 2014. The research firm published a shipment analysis of the smartwatches and smartbands, noting that "over 720,000 Android Wear devices shipped in 2014 out of a total of 4.6 million smart wearable bands."

Canalys found Motorola was the clear leader among Android Wear vendors, although the Moto 360 supply had remained constrained through Q4 2014. On the other hand, LG G Watch R is said to have performed significantly better than its predecessor - the original G Watch.

Coming to the players like Sony and Asus, the Canalys report hadn't given out any details, but noted that Pebble shipped a total of 1 million units from its 2013 launch through to the end of 2014. Canalys VP and Principal Analyst, Chris Jones, had said that Pebble saw success especially in the second half of 2014 due to the "continual software updates, more apps in its app store and price cuts in the fall"