The Samsung Galaxy Watch 5 comes in 40mm and 44mm sizes, while the Watch 5 Pro comes in a single 45mm size 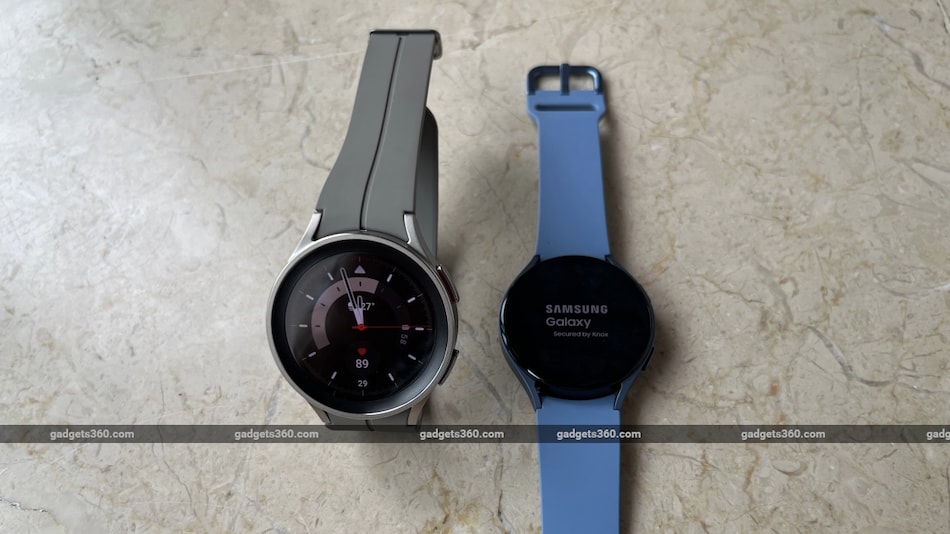 The market for smartwatches built to work with Android smartphones is quite a vast one, particularly with the relatively recent entry of brands such as Oppo and OnePlus. Other brands such as Fossil and Amazfit have been around for a while, and have a strong presence as well. However, one name stands out for a number of reasons, with an established presence in the high-end smartwatch space — Samsung. The South Korean company recently launched its latest smartwatches in India, the Galaxy Watch 5 and Galaxy Watch 5 Pro.

Priced at Rs. 27,999 and Rs. 44,999 onwards for the Samsung Galaxy Watch 5 and Galaxy Watch 5 Pro, respectively, these smartwatches built for use with Android smartphones, and promise flagship-grade performance and features. With Samsung's One UI Watch 4.5 operating system based on Google's Wear OS 3.5, and an impressive set of specifications, are these the best smartwatches an Android smartphone user can buy right now? Find out in this review.

The Galaxy Watch 5 Pro also weighs a fair bit more at 46.5g, as compared to the Watch 5 which weighs 33.5g. This has a lot to do with the materials used; the Pro version has a titanium case, while the Watch 5 has an aluminium case. I quite liked how both devices felt to wear. While the Galaxy Watch 5 was lighter and slightly more comfortable, the Watch 5 Pro felt a lot more solid and premium, and is built to withstand impact and rough use.

The Samsung Galaxy Watch 5 and Galaxy Watch 5 Pro both have two physical buttons and microphones on the right side, while the left side has the speaker grille near the bottom. The undersides of the two watches are similar with the optical sensors for heath and fitness tracking, although the finishing of the plastic is different on the two smartwatches. Both smartwatches have a 5ATM rating for water resistance.

A big change on the Samsung Galaxy Watch 5 and Galaxy Watch 5 Pro is the omission of the rotating bezel, which was popular on earlier Galaxy Watch devices. This is replaced with a ‘digital' bezel that serves the same function of scrolling; running your finger along the edge of the screen lets you scroll quickly, and the watch even provides some haptic feedback to replicate the feeling of physical rotation.

Both smartwatches have replaceable 20mm silicone straps, and in my opinion, the included straps are ideal to use with the devices because of how well they blend with the shape of the dial and lugs. The Samsung Galaxy Watch 5 has a simple buckle-based fitting method, while the Galaxy Watch 5 Pro has a more complicated and less easily adjustable magnetic clasp. The latter feels nicer and is admittedly easier to use once properly adjusted, but adjusting the tightness itself takes a lot more effort, and finding the right setting can be tricky.

In terms of specifications, both watches use Bluetooth 5.2 for connectivity, and are powered by an unspecified 1.18GHz dual-core processor, with 1.5GB of RAM and 16GB of built-in storage (7.5GB of this is user accessible). There is also dual-band Wi-Fi connectivity, GPS, and NFC for additional connectivity functions. The Samsung Galaxy Watch 5 has a 410mAh battery, while the Watch 5 Pro has a larger 590mAh battery.

Samsung and Google's software partnership for wearable devices isn't new, but we do see some improvements on the Galaxy Watch 5 and Galaxy Watch 5 Pro as compared to the Samsung Galaxy Watch 4 Classic. The new devices run Wear OS 3.5, but like before, there is Samsung's OneUI Watch 4.5 user interface on top.

This system requires the use of the Galaxy Wearable app to set up and manage the connection between the smartphone and smartwatch, instead of the Wear OS app. Furthermore, this also limits the Samsung Galaxy Watch 5 and Watch 5 Pro to be used only with Android devices; the necessary apps are not available on iOS, unlike the Wear OS app.

On the other hand, this sets the Samsung Galaxy Watch 5 and Watch 5 Pro apart from most Wear OS devices right now, in a good way. The devices combine the best bits of both platforms — the wide app support and excellent Google app suite for smartwatches, along with the rather nice looking and convenient user interface, perfected over many years of development, by Samsung.

The interface works well, is easy to navigate around, and is really good to look at. It will feel familiar to anyone who has used Samsung's Tizen-based smartwatches, Wear OS, or even older Android Wear smartwatches.

Most of the preinstalled apps are Samsung's own, but you can access the Google Play store for Wear OS to download and install any other apps you might want. This includes various Google apps such as Maps, Keep, and YouTube Music, along with other useful ones such as Shazam, Flightradar, and Strava, to name a few.

Health and fitness tracking uses the Samsung Health app, both on the smartwatches and the smartphone. You can also install the Google Fit app on both devices for this if you prefer, but I quite liked the way the Samsung Health app presented data. The Galaxy Wearable app will also let you create ‘Tiles' for quick access to various functions and features on the smartwatch, including various health and fitness-based tiles from Samsung Health, and for some supported apps such as Google Keep and Microsoft Outlook.

Like other high-end devices in the premium price range, the Samsung Galaxy Watch 5 and Watch 5 Pro are proper smartwatches, offering an all-round experience and full-fledged connectivity. This includes standalone apps with full functionality, the ability to place and receive calls using Bluetooth, Wi-Fi, or LTE, and the ability to respond to some notifications directly from the smartwatch itself.

All of this worked as expected, with the Galaxy Watch 5 and Watch 5 Pro serving as complete wrist-worn devices with independent capabilities, rather than just a mirror for your smartphone's screen with a few simple apps built in (which most affordable watches tend to be). Connectivity was stable, and all the key functions worked without any trouble.

The more expensive Samsung Galaxy Watch 5 Pro has a titanium case, which feels better and more durable than that of the Galaxy Watch 5

Most functions on the Samsung Galaxy Watch 5 and Watch 5 Pro rely on Bluetooth and Wi-Fi connectivity, particularly if your smartphone and smartwatch are always near each other, as would be the case for most users. However, LTE connectivity does offer some flexibility of being able to leave your smartphone behind at times, while retaining the ability to place calls or view and respond to some notifications on your smartphone, for those who need it.

Fitness tracking on the Samsung Galaxy Watch 5 and Watch 5 Pro was very good, although I strangely got slightly different results on the two devices despite them being similar in terms of tracking hardware. The Watch 5 recorded 1,007 steps when I manually counted 1,000, while the Watch 5 Pro recorded 997. The difference wasn't much, and the error margin was less than one percent on both devices.

Oddly, there was also a slight mismatch between steps recorded by the Samsung Health app, and steps recorded during the specific workout. GPS tracking slightly over-reported the distance walked during an outdoor walk, but the difference was small enough to be ignored. Heart rate tracking was excellent on both watches, both while moving or sitting down. Sleep tracking was decent, and offered useful insights into the quality of my sleep, apart from the number of hours I was asleep.

Blood oxygen tracking was accurate as well, but getting a complete reading was in itself the tricky part. Manual readings can only be taken when sitting with your arm placed in a particular position, and I often had failed attempts despite following the instructions. When I did get a successful reading, the results were accurate (compared to a pulse oximeter). The devices are also able to measure body composition through a simple test, but I wasn't able to verify its accuracy.

Samsung's many years of experience in the business of smartwatches continues to pay off for the company, and the Galaxy Watch 5 and Galaxy Watch 5 Pro are among the best premium smartwatches you can buy right now. The devices are true all-rounders, offering full-fledged smartwatch capabilities, as well as accurate fitness tracking and excellent connectivity options. The software combination of Wear OS and Samsung OneUI Watch is also a strong differentiator in the segment.

There are a couple of drawbacks — the Samsung Galaxy Watch 5 and Watch 5 Pro can only be used with Android smartphones, and blood oxygen tracking is a bit tricky to deal with. However, on the whole, these smartwatches are capable, adept, and entirely worth looking at if you use an Android device as your primary smartphone.

Between the Samsung Galaxy Watch 5 and Watch 5 Pro, the former is much better value for money at Rs. 27,999 onwards, while the latter feels a bit expensive. However, the excellent build quality and better battery life of the Galaxy Watch 5 Pro does justify the higher starting price to some extent, especially if you intend to pick up the variant with LTE connectivity.