Andor Review: Grown Up Star Wars Pushes the Galaxy, Just as Rogue One

Taking Star Wars on TV beyond Jedi and bounty hunters. 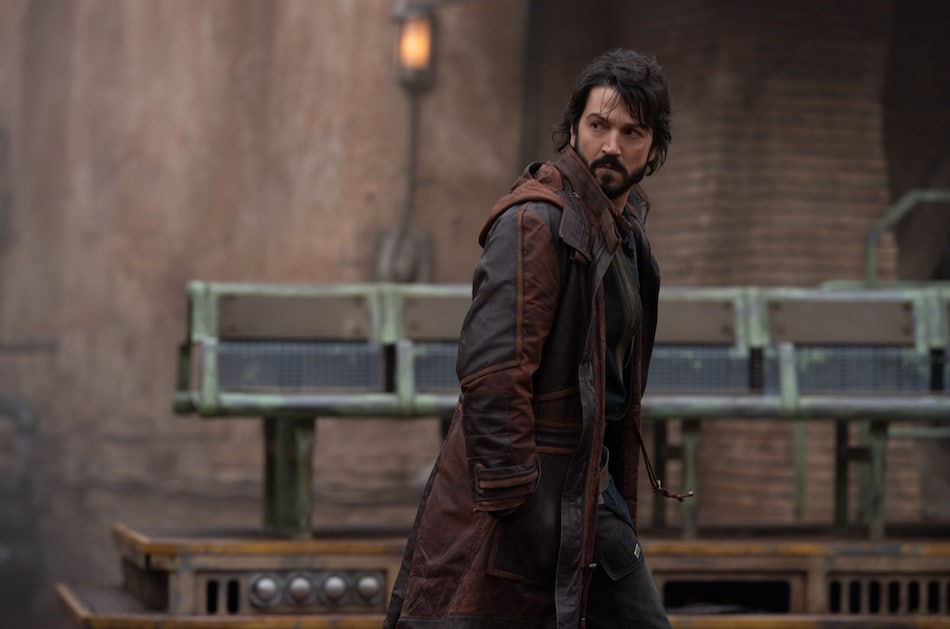 Andor — premiering Wednesday on Disney+ and Disney+ Hotstar — revisits Diego Luna's title character Cassian Andor, first introduced on Rogue One nearly six years ago. (It's set five years prior to that Star Wars film though, where the Rebel Alliance is in its infancy, and Andor wants nothing to do with a grand resistance.) Fittingly for a movie that was darker than everything in its universe and expanded the definition of what Star Wars could be, its TV prequel spin-off is more grown up than anything we've seen before from the galaxy far, far away. Andor visits a brothel in the opening 10 minutes, and he kills two men later that episode. This is not a hero character, just as he wasn't on Rogue One, where he killed an injured informant because he was a liability.

It's only appropriate then that Andor's boldness comes from Rogue One co-writer and uncredited reshoots director Tony Gilroy, who assumes the position of creator, showrunner, and head writer on the new Star Wars series. (He wasn't first choice though, just as on Rogue One.) Working with Nightcrawler writer-director brother Dan Gilroy, and House of Cards creator and showrunner Beau Willimon, Tony Gilroy and Co. craft a Star Wars series befitting their talents. At one end, there's office and Imperial politik. On the other, we've hardened rebels always afraid, scrounging on the fringes, and fighting for their survival. But they also have something in common. The Rebels view each other with suspicion, just as their counterparts in their sleek white offices running the Empire.

There's a degree of murkiness in every corner of Andor — and that makes sense. After all, there are no Jedi here chasing a purity of mind or heart, no do-gooders who believe in the Force, and no heroes with a hurrah can-do spirit willing to put everything on the line. This is the gritty end of the line, following the non-lightsaber folks who must get by with ingenuity, negotiation, and hardiness. It's about those sketching out an existence on the fringes of the Empire. That makes Andor more relatable and ground-to-earth — its characters don't have superpowers or specialised armour — though that also means it's anything unlike what Star Wars has trained us to expect, even on the small screen. I expect it might disappoint some, but this is exactly what's expected from the guy behind Rogue One.

All You Need to Know About Andor, the New Star Wars Series

Five years prior to Rogue One, Andor begins with Cassian Andor (Luna) based on the desert world of Ferrix, where he lives with his adoptive mother Maarva (Fiona Shaw, from the Harry Potter films) and droid B2EMO, who's simply known as Bee to Andor. While B2EMO happily does his bidding, it feels left out as Andor doesn't involve it on his adventures. But their time together is at an end. After an incident on the corporate-run planet of Morlana One, Andor is forced on the run. He's assisted by black market dealer and Rebel recruit Luthen Rael (Stellan Skarsgård, from Chernobyl), who pulls him into the fledgling resistance's earliest schemes. We might know where he's headed, but for now, Andor is essentially a paid-for mercenary.

This occupies four episodes that run between 30–40 minutes — all critics, including I, had access to a third of Andor's first season — but that's only because the Star Wars series makes room for a variety of other faces.

One of them involves a young Andor, or rather “Kassa”, on his birth planet of Kenari. In present day, we have Morlana deputy inspector Syril Karn (Kyle Soller, from Poldark) who makes it his personal mission to chase down Andor. The Star Wars series also makes room for Imperial officer Dedra Meero (Denise Gough, from Too Close), who has Andor on her radar too. There's Bix Caleen (Adria Arjona, from Morbius), a friend of Andor's on Ferrix who fixes machines and is pulled into a revenge mission. And lastly, there's Imperial senator Mon Mothma (Genevieve O'Reilly, returning from Rogue One as with Luna) on the galaxy's capital Coruscant, who's trying to do good within Imperial constraints while secretly trying to found the Rebel Alliance.

Each of these characters, and their situations as a result, is an addition to Andor. Through Mothma, the new Star Wars series hits at the risks of operating from the heart of the Empire. This was hinted at but never explored in Obi-Wan Kenobi. In Dedra's case, she is pushing for change — or rather, furthering her own rise up the ladder — within Imperial bureaucratic structures, but it's not in the name of the greater good as with Mothma. Dedra is not just battling a monolithic system though, but also one that's filled with men who've failed upwards.

Andor, Babli Bouncer, and More on Disney+ Hotstar in September

With Bix and Syril, it's more primal desires. Both have experienced loss, and to fill that hole in their lives, they go after something that could give their life meaning. And with the Kenari flashback, Andor digs at what Star Wars has always been, in some way. In its stated desire to bring order to galaxy, the Empire has a high need for organisation, as is evident from its minimalist design principles. This flattens cultures, peoples and worlds that stand in its way, who lose their livelihoods and are displaced — or worse killed — for the Empire's grand plans. While Rogue One showed what an armed occupation can look like, Andor presents a more mundane but equally disastrous scenario.

Given the tone of the new Star Wars series, Luna plays a grimmer version of Cassian Andor who's only in it for himself right now. Though she's second billed, there isn't enough of O'Reilly in the first four episodes. But in her brief presence, she brings shades of vulnerability and frustration to a Mon Mothma who's years away from commanding Rebel Alliance. Third-billed Skarsgård is having to play double duty — I cannot say more than that — and there's a gruffness to his Luthen Rael. He's clearly someone who's seen a lot of the world.

Arjona and Gough, who are fourth and fifth billed respectively, have very little to do in Andor's first four episodes. Arjona's Bix Caleen does get more screen time. The sixth-billed Soller, meanwhile, has a big presence across the first three episodes as Syril Karn. He has a maverick sense of authority that backfires — sort of like the mirror version of what happened to Oscar Isaac's pilot Poe Dameron in Star Wars: The Last Jedi.

It's smart to have a range of supporting characters, especially when Andor has the longest run of any Star Wars TV series yet. Ewan McGregor-led Obi-Wan Kenobi was technically the shortest at six episodes, though The Book of Boba Fett only devoted five episodes to its title character given the other two were more like The Mandalorian season 2.5. Speaking of, the Baby Yoda show had been the longest so far with eight episodes apiece for both of its seasons. But while The Mandalorian is much more episodic, Andor is a lot more serialised.

Andor to Jamtara Season 2, the Biggest TV Shows in September

Having seen four of the 12 episodes — you can call it the first of three acts, given Luna has described making Andor like a “very long movie” — I'm intrigued to see how they handle the rest of it. That also means that this is by no means a final verdict. But what's been refreshing to see is that Star Wars can stand for something else than the middling tales of Jedi and bounty hunters we've been served for the last couple of years. For far too long has this franchise been happy to retread ground, mine nostalgia, revisit the past, and call it a day. And even though Andor is a prequel to a prequel, it still feels it's breaking new ground.

Andor premieres Wednesday, September 21 on Disney+ and Disney+ Hotstar. A new episode will air every Wednesday around 12:30pm IST/ 12am PT until November 23. In India, Andor is available in English and Hindi.