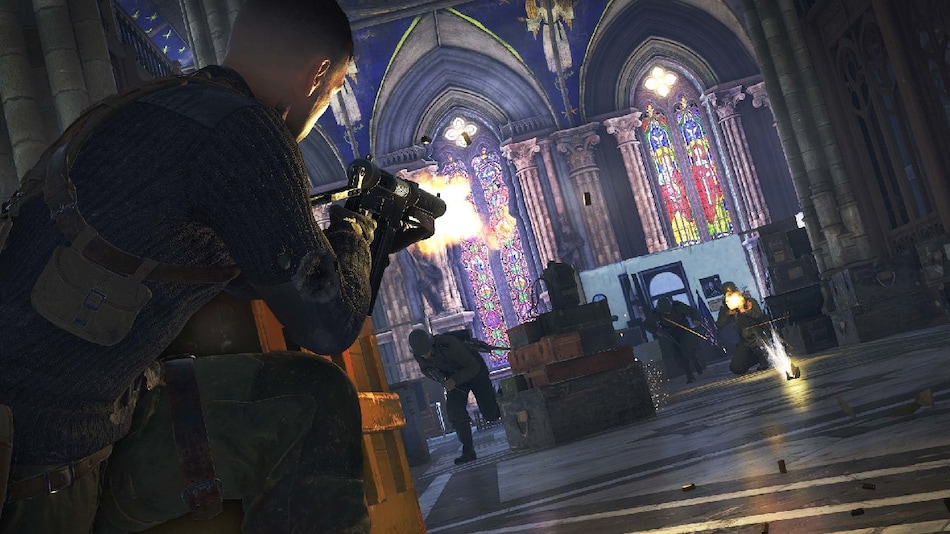 Vampire: The Masquerade – Swansong lets you step into the shoes of vampires with different abilities

Vampire: The Masquerade – Swansong, Sniper Elite 5, Dolmen, and Evil Dead: The Game are set to arrive in May, among several other titles across different genres arriving in time for the summer holidays. Tactical RPG fans can gear up for Warhammer 40,000: Chaos Gate – Daemonhunters, a reboot of the original 1998 title. Co-op enthusiasts can try out We Were Here Forever, which is the fourth title in the popular series that features walkie-talkie communication with a friend as gamers solve puzzles together to escape confinement in a castle — or play the role of the Marked Inquisitor as they hunt down powerful Mages in the Souls-like RPG Salt and Sacrifice.

Fans of side-scrolling action-adventure titles can help Samurai Hiroki take out his enemies with Trek to Yomi, while Eiyuden Chronicle: Rising — a prequel to the upcoming Eiyuden Chronicle: Hundred Heroes will have gamers fighting and scavenging for materials to help restore a town after a calamity strikes. Sniper Elite 5 is also set to arrive in May, with a campaign, drop-in PvP and a co-op mode — plus a grisly ‘Enhanced Kill Cam'.

In addition to the titles part of the list below, don't forget to check out Wildcat, Line War, Citizen Sleeper, Crowns and Pawns: Kingdom of Deceit, Brigandine: The Legend of Runersia, and Touken Ranbu Warriors. Meanwhile, you can also access titles like My Time at Sandrock, Cantata, and Songs of Conquest with Steam Early Access in May.

If you're looking for your next game, here's our handy guide to 12 most exciting titles you can look forward to for PC, PlayStation 4, PlayStation 5, Xbox One, Xbox Series S, Xbox Series X, and Nintendo Switch in May 2022.

Twenty-five years after the previous title was released, Warhammer 40,000: Chaos Gate is making a comeback. The turn-based tactical RPG is set in the 41st millennium, with galaxy at risk from the Bloom, an intergalactic plague of cosmic proportions capable of rotting entire worlds away. Controlling the powerful Grey Knights, elite warriors considered humanity's greatest weapon, you must try to stop a plot to infect the galaxy with the plague in Warhammer 40,000: Chaos Gate – Daemonhunters.

The game will put your strategy-making skills to the test — as you conduct research and engage in combat, the plague will affect planets across the galaxy. You can customise your Grey Knights, be it armour, voices, or faces. Gameplay involves both melee and remote attacks, which is enhanced by the Precision Targeting system, which is claimed to offer sure-fire accuracy. The game will let you manipulate the environment around you as you fight to foil the even plans of the Nurgle in this upcoming gothic science fiction title.

Devolver Digital's upcoming side-scrolling action-adventure game will see you step into the shoes of the young Samurai Hiroki and walk the path of vengeance as he pursues the enemies who destroyed his home. Trek to Yomi is all black and white, similar to popular title Limbo. The developers Shadow Warrior and Flying Wild Hog showed off a trailer for the upcoming title at E3 2021, including various gameplay features.

The game is expected to feature a cinematic style and design, with freeform exploration and side-scrolling combat with a fixed camera. Spending your time exploring the game for hidden areas will grant access to upgrades for Hiroki's health and stamina, along with bonus weapons and tools. Once you complete the game, you can choose to play an extremely challenging one-hit mode which will cause Hiroki to die the moment he is hit.

We Were Here Forever

This indie title is a cooperative first-person adventure that features a lot of puzzles that you must solve along with a second player. You'll have a walkie talkie to talk to your partner, since you can't see each other, allowing you to tackle the challenges together. The fourth game in the We Were Here series that made its debut in 2017, We Were Here Forever will feature new areas, puzzles and an improved interface and gameplay.

Back in the dungeons of Castle Rock, you and your fellow prisoner (your partner) will have to find a way to escape by tackling different puzzles to get out. Once you escape the Keep, you and your partner will have to venture into different areas like Rockbury, the Graveyard, and the Foundry. You won't need to play any of the previous titles, even though the stories are connected. Your ability to work with your partner will decide if you survive and escape.

Arriving as a prequel to the upcoming Eiyuden Chronicle: Hundred Heroes that is set to debut in 2023, Eiyuden Chronicle: Rising is a Japanese action-RPG that promises a lot of sword-fighting and exploration. You'll need to “scavenge dungeons” and earn materials as you work to rebuild New Naveah to its former glory — yes, this JRPG comes with town upgrading mechanics, alongside fast paced combat. The game includes characters including acting mayor Isha, the scavenger JB, and the mercenary Garoo.

While playing Eiyuden Chronicle: Rising, you'll explore ancient ruins as you discover a town struggling to rebuild after a massive earthquake. You'll have to discover the secret hidden in the nearby Runebarrows, as you uncover a dark conspiracy the further you progress in the game. Finally, decisions you make as you play the game will also affect the main story of Eiyuden Chronicle: Hundred Heroes, according to the game's official description on Steam.

This Souls-like dark fantasy RPG throws you into a once-peaceful kingdom that has been brought to ruin by powerful Mages. You will play as a Marked Inquisitor, a condemned warrior who has awakened to hunt down these Mages that plague this world. Bringing down these foes will earn you drops that can be used to craft weapons and armour. The Mages aren't your only adversaries in this labyrinthine world of Salt and Sacrifice, you will also encounter scavengers, secrets, traps, and powerful guardians.

The Loam Lands is a debased Lovecraftian-inspired world that serves as the setting for the Source of Madness. The developer has employed an AI-assisted art style to embellish the world. It is a 2D side-scrolling roguelike that allows you to control an Acolyte while uncovering the mysteries of these lands and The Tower of Madness.

The game will pit you against procedurally generated monsters that are animated via neural network AI. Hence, every enemy you face will provide a unique challenge. You will take on these monsters with your close-combat magic. There will be an expansive skill tree to bolster your attack by unlocking abilities, classes, and spells.

The Centennial Case: A Shijima Story

Haruka Kagami is a novice mystery writer who visits the Shijima family and finds herself unravelling the mystery of a chain of inexplicable murders over the past century. You control Kagami on a hunt for clues in three different time periods — 1922, 1972, and 2022. The murder cases are divided into three parts: the Incident phase, Reasoning phase, and Solution phase.

The Centennial Case: A Shijima Story's narrative is driven by beautifully shot live-action scenes that are directed by Koichiro Ito with cinematographer Yasuhito Tachibana. The characters are voiced in Japanese with subtitles in English, French, Italy, German, and more. The game is being developed and published by Square Enix of the Final Fantasy fame.

Inspired by the Evil Dead movie franchise and the Ash vs Evil Dead television series, Evil Dead: The Game offers you over the top survival horror action. You will be able to slip into the shoes of iconic characters like Ash, Scotty, Lord Arthur, Kelly Maxwell, and more. The game will also come with maps based on locations from Evil Dead, including the infamous cabin in the woods.

Evil Dead: The Game will have a single-player mode and a four-player online co-op game mode. There will also be a PvP mode with one of the players taking control of the Kandarian Demon to hunt other players.

Big Bad Wolf developed Vampire: The Masquerade – Swansong is a single-player role-playing game that, as the name suggests, includes vampires. You get to step into the shoes (if they are wearing any) of three vampires that possess different abilities.

Over the course of the game, you can switch between them all. The game is set in Boston wherein the Swan, Hazel Iversen has been elected the new Prince. You can customise the characters and upgrade their abilities as per your playing style.

Horror action RPG Dolmen drops you into a very hostile alien world called Revion Prime. Your first order of process is to bring back samples of a crystal which consists of some unique properties. The crystal is known as Dolmen. These crystals allow interaction between realities and also help revolutionise space exploration.

Battles in Dolmen make your character stronger with multiple weapons — including melee and ranged — at your disposal. Characters also get to activate ‘Energy Mode' which imbues your melee weapons with elemental status effects that allows you to take proper advantage of your enemy's weakness.

Blackbird Interactive developed Hardspace: Shipbreaker lets you assume control of a shipbreaker who is working for Lynx Corporation. The game gives you multiple gadgets such as laser cutters and tether tools to fiddle around with. As the player, you have to salvage useful materials from abandoned spaceships which earns you credits that can be used to pay off the massive debt you owe to Lynx.

As you progress in the game, you get access to harder contracts and also better suits which can endure more damage, increase the oxygen capacity, upgrade cutters, and more. Hardspace: Shipbreaker was in the works since early 2016 and entered Early Access post that. The game will be available to play on PC Game Pass on day one.

The latest addition in the Sniper Elite series brings to you a tactical third-person sniper shooter set during World War II in France. The game offers a campaign, co-op, and drop-in PvP. It also introduces an ‘Enhanced Kill Cam' that is said to be more realistic and grislier than ever.

Sniper Elite 5 also brings better gunplay physics. Gamers have to factor in rifle stock and barrel options along with wind. heart rate and gravity to take a shot.

Multiplayer mode lets you customise your character, and load-outs, among other things. You can earn XP and medals in competitive 16 player battles that are for sure going to be chaotic.

We Were Here Forever

The Centennial Case: A Shijima Story