Lore-wise, Kiriko trained with the Shimada brothers at a very young age. 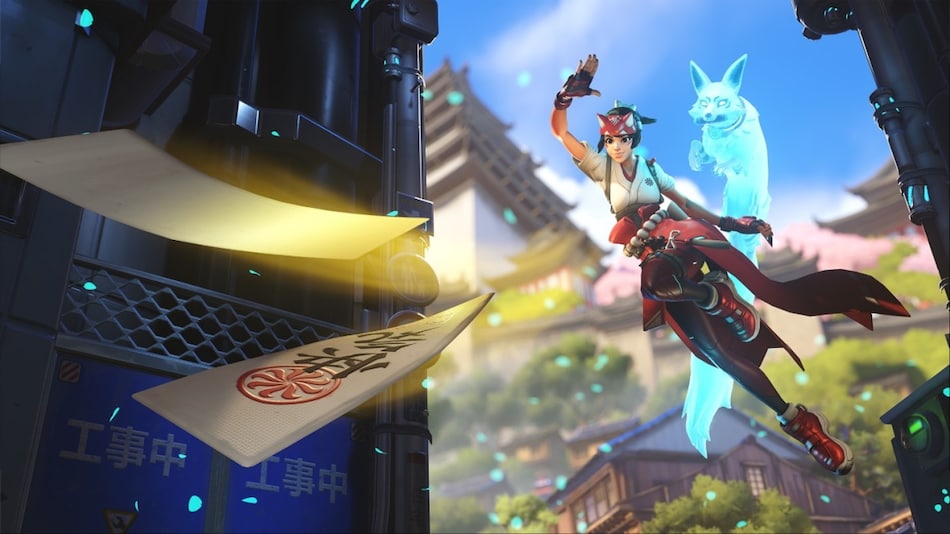 Kiriko can also run along walls and teleport to allies

Overwatch 2 has revealed its latest addition to the hero roster, Kiriko. The character was subject to widespread leaks, earlier this week, and is now revealed to be a support/ healing ninja, with ties to existing heroes, Genji and Hanzo. Blizzard Entertainment dropped a gameplay trailer, highlighting her kit and ultimate ability, which summons a spirit fox named Kitsune. Overwatch 2 launches October 4, on PS5, PS4, Xbox Series S/X, Xbox One, and PC.

Kiriko is a support-type character, who blurs the line between DPS and healer — akin to Baptiste at launch. As someone who trained alongside the Shimada brothers, she has mastered the ability to scale walls and navigate in a quick, nimble fashion. Her primary healing ability is the Healing Ofuda, where she throws out a bunch of sacred talismans to restore teammates' health. Like most support characters in Overwatch 2, players are not required to have the best aiming and tracking skills, as Kiriko's talismans can easily hone in on her targets. This makes healing fast, erratic characters, such as Wrecking Ball, Genji, and Mercy feel like a breeze.

Kiriko's secondary skill is a kunai blade, which can be used to exert damage onto incoming foes. Despite being a hitscan weapon, one must keep in mind that she's a healer, and therefore, the inflicted damage is reduced, compared to other damage-type heroes. That said, if you're a flex player, you will be able to turn odds in your favour, by constantly clicking enemy heads.

During tense situations, Kiriko can throw down a sacred bell, granting herself and her allies, within range, temporary invulnerability. Think of it like Baptiste's Immortality Field, but here the effect is instant and needs to be timed perfectly. If needed, she can also save her own skin, by toggling a teleport ability and evading the site to seek cover from an ally.

Kiriko's most powerful ability, however, is the Kitsune Rush, where she summons a spectral fox — holding a ninja scroll in its mouth — to light up a pathway of ghostly torii gates. All teammates who pass through these gates will be granted a massive speed buff, including faster movement, weapon reload speed, and cooldowns. Currently, there is no word on how long this ability lasts.

With Overwatch 2, Blizzard is getting rid of the loot box system, and introducing a battle pass. Kiriko will be joining the roster alongside new tank hero Junker Queen and damage-type Sojourn, at launch. Those on the original 2016 Overwatch will gain free access to Kiriko, for use in online PVP matches.