The Xbox app on PC segregates game completion estimates based on four categories. 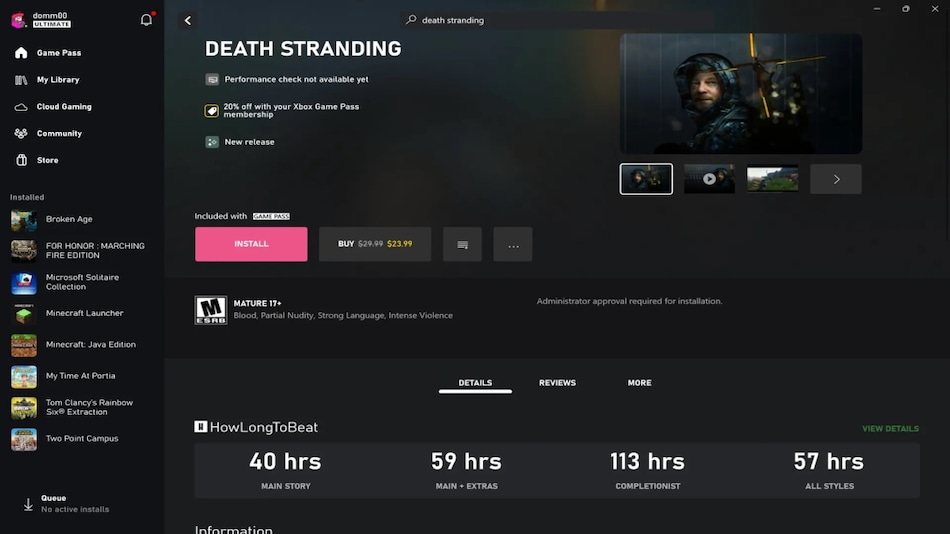 HowLongToBeat is a community-driven website that specializes in game lengths

Xbox has partnered with HowLongToBeat to reveal game completion estimates on its PC app. Microsoft added the tool as part of its September update, informing players, on average, how long it would take to finish a game from their catalogue. The website/ resource compiles values from community members and generates an average figure, helping gamers short on time to map out their sessions. The publisher has also improved launch times for the Xbox PC app by 15 percent, alongside other quality-of-life improvements.

The HowLongToBeat integration categorises playtimes into four groups. Up first, is the ‘Main Story,' which only focuses on the primary objectives, just enough to see the credits roll. Second is the ‘Main + Extras tally,' which takes some side missions and exploration into consideration. Then there's the ‘Completionist' mode, which is recommended to those striving to unlock every achievement/ medal, the game has to offer — understandably, the longest. And finally, there's a ‘Combined' estimate, which takes all aforementioned play styles and spits out an aggregate figure.

Clicking the ‘View Details' button on the Xbox PC app redirects to the HowLongToBeat website, letting players drop their own completion times. You can access guides, help out other players in the community, and compare times for bragging rights. Additional insights such as reviews, playthrough notes, and data breakdowns by the platform are also put on display.

Microsoft has also improved load times on the Xbox PC app by 15 percent, with fixes for the occasional stutters while scrolling. “We've seen crash-free sessions improve to 99.9%, and player reports of games that didn't download or didn't install successfully reduced by nearly half,” explains Jason Beaumont, Partner Director of Product Management. The studio also notes improved search results in the app, and a store page restructure. Instead of having to scroll down, game trailers, screenshots, and descriptions are now presented at the top — akin to Steam and Epic Games Store's interface.

Earlier this month, Xbox launched its Game Pass Friends & Family plan in Ireland and Colombia. As the name suggests, the subscription allows users to share account benefits with up to four people in their gaming circle. Members will only be required to have a Microsoft account, and be residing in the same country. Currently, there is no word on India launch.