Although primarily a vacuum cleaner, the Philips SpeedPro Aqua can simultaneously wet mop the floor. 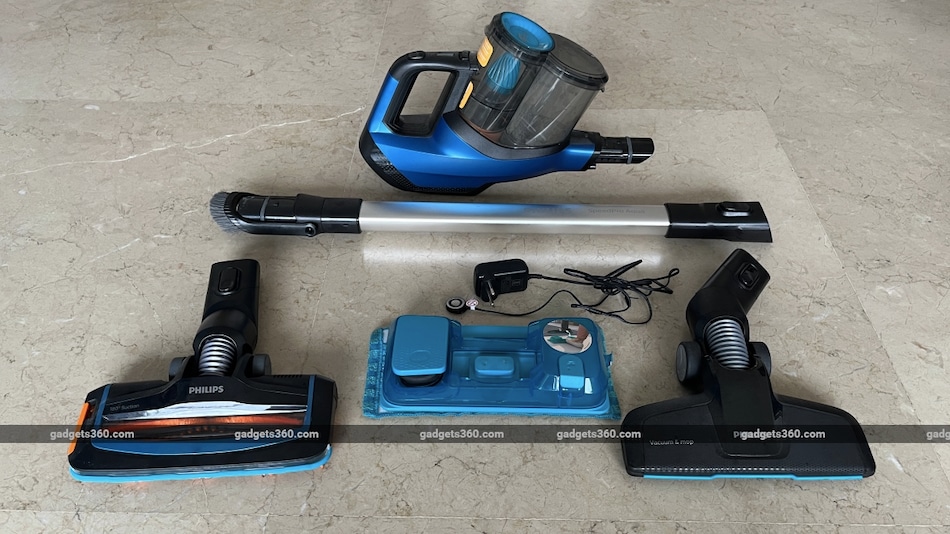 The Philips SpeedPro Aqua is priced at Rs. 35,999 in India

Cordless vacuum cleaners have made dry cleaning a breeze, with premium options from brands such as Dyson and Samsung delivering both ease of use and effective cleaning performance. Wet mopping on the other hand, is still something that most do by hand, using traditional methods such as a mop and a bucket of water. Although robot vacuum-mops do offer the ability to mop while vacuuming, a handheld device should naturally offer much more precision when it comes to wet mopping. The device I'm reviewing here promises to do just that.

Priced at Rs. 35,999, the Philips SpeedPro Aqua is a cordless, handheld vacuum cleaner with the ability to simultaneously vacuum and mop your floors. A special water tank and mop fitting enables this, and the device also promises good battery life and capabilities when it comes to regular vacuum cleaning. Is this the most versatile and easy to use handheld cleaning device for your home? Find out in this review.

Some of the more popular premium cordless vacuum cleaners have interesting designs, with options from Dyson and Samsung featuring styling that seem to be inspired by science fiction. In comparison, the Philips SpeedPro Aqua looks less like a space weapon, and more like a watering jug.

This isn't a bad thing though, and the blue colour actually looks quite nice. The Philips SpeedPro Aqua is entirely made of plastic, with a removable transparent dustbin, and a fixed 21.6V battery pack encased within the vacuum cleaner. The vacuum cleaner weighs 2.1kg and has, what the company calls, a PowerBlade motor with PowerCyclone technology that's rated for airflow of up to 800 litres per minute.

The handle is right at the back, and offers a decent, balanced grip over the vacuum cleaner when in use, even with the pipe and fittings attached. The nozzle at the front where fittings can be attached is conveniently shaped for standalone use (without any fittings attached) as needed, to quickly pick up dirt or dust from tables, counter tops, and the like.

Using the Philips SpeedPro Aqua is fairly simple, with a single slider switch to control the power setting. There are two power modes — low and high — while the position closest to you when normally holding the device turns the vacuum cleaner off. Above the switch is a light indicator for the battery level and further above that is the release switch for the dustbin. At the bottom are the magnetic contact points for the charger to latch on.

The dustbin of the Philips SpeedPro Aqua has a two-chamber design and a total capacity of around 0.4L. This isn't a lot, and indeed I had to clean it out a lot more often as compared to the Samsung Jet 90 Complete. Cleaning it does require a fair bit of effort; the dustbin has to be removed and the lid opened to empty it out. Often, I had to even reach in to untangle certain messes, such as hair and the odd plastic bits.

While competing cordless vacuum cleaners usually have more than a handful of fittings included in the box, the Philips SpeedPro Aqua doesn't have too many. There is a motorised roller head with LED ‘headlights' for standard vacuum cleaning and a second combination head that has both, vacuum suction and wet-mopping, capabilities.

In addition, there is a metal extension pipe that can be used with either of the main fittings, and has an integrated flip-out brush fitting as well. The pipe itself has a fixed length, and is able to provide power to the motorised roller head when connected.

The charger of the Philips SpeedPro Aqua is quite simple, with an adapter to plug into a wall socket on one end and a small, magnetic contact on the other end which attaches onto the bottom of the vacuum cleaner. There is a wall-mounted charging bracket included in the box as well, if you need it. The charging system felt a bit cheap and rudimentary given the price of the Philips SpeedPro Aqua, but I didn't face any functional issues with the setup.

The water tank on the Philips SpeedPro Aqua's mop fitting has a capacity of 0.28L

The main vacuum head of the Philips SpeedPro Aqua has a unique design that enables it to capture dirt and dust at a 180-degree angle, so it can also pull in impurities from the sides of the head. Interestingly, there are LED lights which help to illuminate the floor right in front of the fitting, and illuminate any impurities. This worked well both in the dark, as well as in dimly-lit conditions.

The wet-mopping functionality uses a basic, non-mechanical fitting that combines with a simple vacuum head to offer simultaneous wet and dry cleaning. The mop fitting is a water tank with small openings at the bottom to trickle water onto the included mop cloth, and it can be quickly attached and removed using hook-and-loop fasteners. Two mop cloths are included with the Philips SpeedPro Aqua, and can be washed normally when dirty.

When fixed onto the vacuum fitting, the vibrations cause the water to release gradually, which is then spread using your hand movements. It's a simple but effective way to mop without needing to bend your back too much. The water tank has a capacity of 0.28L, and has a foot pump to speed up water release as needed. Philips states that you can use clear, non-foaming detergent mixed with clear water in the tank, if desired.

The Philips SpeedPro Aqua feels a bit underpowered and basic when compared to products from competing brands such as Samsung and Dyson, at least when it comes to vacuuming. However, it's the wet-mopping functionality that sets the SpeedPro Aqua apart, since most cordless vacuum cleaners available right now offer only dry cleaning. This also puts the device in unlikely competition with robot cleaning devices, since many of these offer simultaneous wet-mopping.

When it comes to the basics of vacuum cleaning, the Philips SpeedPro Aqua did an acceptable job for the most part. The lower, more power-efficient mode tended to be suitable only for the most basic of cleaning tasks, and I usually found myself using the high power mode most of the time, which worked reasonably well for core functions.

Basic cleaning of hard floors for everyday dust and dirt was fine for me, but the vacuum cleaner tended to struggle with more stubborn messes, including food crumbs and paper or plastic scraps. Rugs and carpets usually gave me a hard time with the Philips SpeedPro Aqua, and I had to make multiple sweeps to get them clean.

The lack of a dedicated cleaning head for fabric surfaces meant that I had to use the standard nozzle to clean sofas, and this wasn't very efficient in pulling out dust and dirt stuck on the surfaces or gaps. The brush fitting is only present on the pipe, which made it a bit difficult to use when cleaning table tops and counters. It was pretty good at cleaning objects on a height, but this wasn't something I needed to do very often.

The nozzle on the Philips SpeedPro Aqua is designed for standalone use, to clean up small messes and on tables and countertops

The two floor-cleaning heads had a reasonable amount of flexibility, which made steering the head easy enough; twisting the Philips SpeedPro Aqua in either direction was enough to get the heads to turn rapidly in place. However, it still felt a bit clunky and heavy, particularly compared to the much more easily manoeuvrable Dyson Omni-glide. Noise levels were acceptable even at the higher power mode, with the SpeedPro Aqua generating a low-pitched, inoffensive hum while working.

What makes robot cleaners good at wet-mopping is the element of automation; the water is evenly spread across the floor by a device which charts its own path efficiently and effectively. In comparison, the Philips SpeedPro Aqua needs to be operated by hand, but the advantage here is the ability to choose where to focus the cleaning, and put a bit more force into the mopping without too much strain on your back or wrist.

Although the mopping functionality is entirely lacking in any mechanical or electronic aid, it still works fairly well. It was admittedly much more effective and quicker to mop the floors than my 360 S7, assuming I was ready and willing to do the work. While I didn't often use it to mop my whole house in one go, I did frequently pick it up to do some extra wet-cleaning in specific areas or rooms at a time.

Battery life on the Philips SpeedPro Aqua is largely on par with competing products, but is a bit disappointing when you consider that the competition runs more powerfully while offering the same run time as the Philips vacuum cleaner. I was able to use it for around 40-45 minutes on the low power mode with the main vacuuming head, and for around 50 minutes when using a non-mechanised fitting.

With the high power mode in operation, the device ran for around 20 minutes per charge. This was entirely ordinary, and was enough to realistically clean only two or three rooms at a time rather than my whole 900-square-foot home in one go.

At Rs. 35,999, the Philips SpeedPro Aqua is firmly priced in the premium segment, and competes directly with high-end devices from brands such as Dyson and Samsung. However, purely on its vacuum cleaning capabilities, it doesn't quite deliver the kind of performance I would have expected at this price. Apart from being slightly underpowered, the vacuum cleaner also feels a bit basic, and doesn't have as many fittings and fixtures like competing devices.

That said, the wet-mopping functionality sets the Philips SpeedPro Aqua apart in a big way, and even makes it worth considering over the competition to some extent. It's still something you'll have to do by hand and the device only offers slight aid to the otherwise manual process, but it admittedly makes the job of wet-mopping a lot easier.