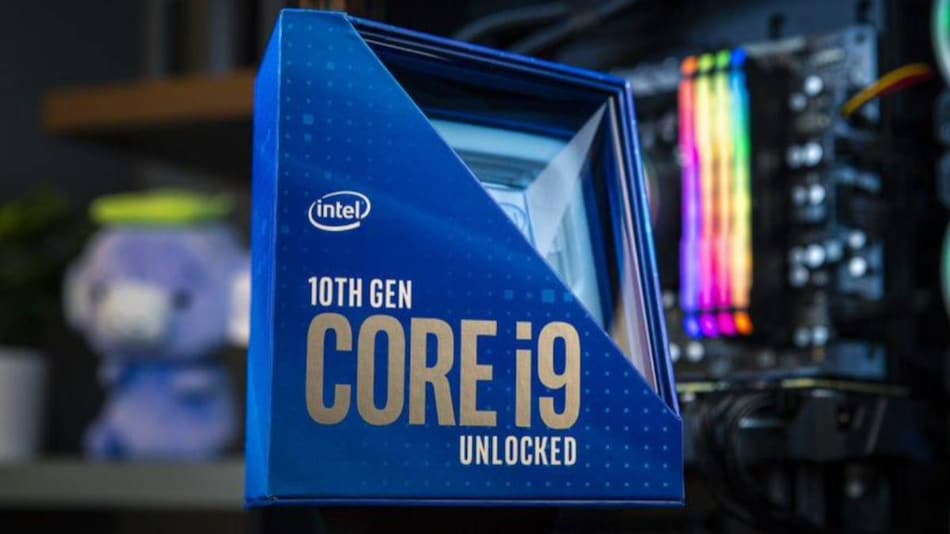 Intel has bumped up speeds and thread counts, and introduced new overclocking controls

Intel has launched its 10th Gen desktop CPU lineup based on the 14nm 'Comet Lake' architecture. The lineup consists of no fewer than 32 models, ranging from a new flagship Core i9 for gamers and enthusiasts, to the mainstream Core i7, Core i5, and Core i3 families, and even some entry-level Pentium, and Celeron options. The refresh comes as a slight update to the 9th Gen 'Coffee Lake' series. Intel continues to refresh and refine its 14nm manufacturing process, but does not introduce a brand new architecture. The company is promoting improved clock speeds, which it says are important for lightly threaded workloads such as gaming, as well as more cores and threads across much of the lineup.

The highlight of the launch is the new top-end Core i9-10900K model which features 10 cores with Hyper-Threading. It has a base speed of 3.7Ghz and a maximum boost speed of 4.8GHz across all cores or 5.3GHz for one core. The highest speeds are achieved using Intel's Turbo Boost Max 3.0, previously seen only in Core X-series models, and Thermal Velocity Boost, which depend on thermal and power variables. The TDP is rated at 125W and this model is fully overclockable. Intel's recommended price is $488 (approximately Rs. 36,630 before taxes). A non-unlocked model, the 65W Core i9-10900, has base and boost speeds of 2.8GHz and 5.2GHz respectively.

The company is billing the Core i9-10900K as the world's fastest gaming processor. Compared to the Core i9-9900K, Intel touts up to 33 percent better framerates in specific games, and 18 percent faster video encoding, with those figures rising to up to 81 percent and 35 percent respectively compared to a three-year-old Core i7-7700K.

Intel has also launched the new Core i7-10700K with eight cores and 16 threads, and these do benefit from Turbo Boost Max 3.0 but not Thermal Velocity Boost. The Core i5 family gets six cores and 12 threads without Turbo Boost Max 3.0. There are unlocked 125W as well as mainstream 65W versions of each. All Core i3 models feature four cores with Hyper-Threading, and all have 65W TDPs.

Below these models, Intel has also launched the new dual-core, four-thread Pentium Gold G6600, G6500 and G6400, and the dual-core Celeron G5920 and G5900 without Hyper-Threading. A series of 35W TDP variants across the hierarchy have also been introduced, for use in low-profile or temperature-sensitive situations.

Up to dual-channel DDR4-2933 RAM is supported for the Core i9 and Core i7 models, while everything below them maxes out at DDR4-2666. Intel has also carried forward its existing UHD Graphics 630 and 610 integrated GPUs with no new features highlighted. CPU models in the lineup with the F suffix, such as the Core i9-10900KF, do not have integrated graphics capabilities.

All the CPUs use the new LGA1200 socket interface, breaking compatibility with existing motherboards. Intel has also quietly released the Z490, H470, B460 and H410 platform controllers to motherboard manufacturers, and all-new lineups can be expected to be announced shortly. LGA1200 will however allow coolers designed for previous LGA11xx sockets to be used.

Asus is the first to announce its lineup of seven Z490 motherboards in India, ranging from the Asus Prime Z490M-Plus priced at Rs. 22,500 to the ultra-high-end ROG Maximus XII Extreme which will cost a whopping Rs. 91,485. The flagship model features four M.2 slots, one 20Gbps USB 3.2 Gen2x2 port plus additional 10Gbps USB 3.2 Gen2 ports, Thunderbolt 3, 2.5Gbps Ethernet, Wi-Fi 6, and Blueooth 5.1. It also boasts of advanced thermal and power delivery hardware for overclocking.

Intel recently launched a 10th Gen 'Comet Lake' series for high-end and gaming laptops, while mainstream slim laptops labeled as 10th Gen might feature either 14nm 'Comet Lake' or the newer 10nm 'Ice Lake' architecture, depending on what the manufacturer chose to use. Leaked roadmaps appear to suggest that Intel will continue shipping 14nm parts for the desktop, all derived from the 6th Gen 'Skylake' platform, until at least 2021 but its struggles with 10nm manufacturing will then be over for good as it transitions to 7nm and beyond.