Realme Narzo 20 Series is set to launch in India on September 21. 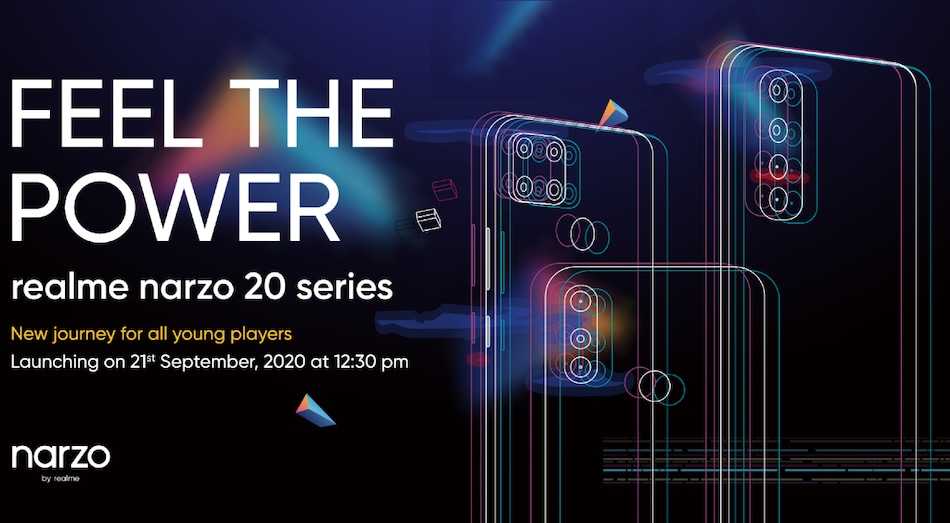 Realme Narzo 20 series was unveiled at the IFA 2020 event earlier this month. The lineup comprises three handsets – Realme Narzo 20 Pro, Realme Narzo 20A, and Realme Narzo 20. The Chinese company earlier announced that all three models will be launched in India next week, on September 21. Now, tipster Mukul Sharma has revealed all possible specifications of the upcoming phones via Twitter and YouTube. From the onboard SoCs to the storage variants, here are all the key specifications revealed by the tipster.

Sharma tweeted the possible specifications of the upcoming Realme Narzo 20 Pro. As per the leak, the smartphone may feature a 6.5-inch full-HD+ (1,080x2,400 pixels) display with an expected refresh rate of 90Hz and a screen-to-body ratio of 90.5 percent.

Under the hood, the Realme Narzo 20 Pro may be powered by a MediaTek Helio G95 SoC. It may come in two RAM options – 6GB and 8GB. In terms of onboard storage, the phone may offer two options as well – 64GB and 128GB.

It is expected to come in two colour options – Black Ninja and White Knight.

It is expected to pack a 4,500mAh battery with support for 65W fast charging. The smartphone may feature a side-facing fingerprint scanner. The phone may weigh 191 grams and measure 162.3 x 75.4 x 9.4mm.

Exclusive: Here are the specs of the Narzo 20 Pro.
Feel free to retweet ???? #narzo20pro pic.twitter.com/1QmTviJbHC

The dual-SIM Realme Narzo 20A may run Realme UI based on Android 10. It is expected to feature a 6.5-inch HD+ (720x1,600 pixels) display with Gorilla Glass protection and a screen-to-body ratio of 89.8 percent. It may be powered by a Qualcomm Snapdragon 665 SoC. In terms of RAM + storage options, the smartphone may come in 3GB + 32GB and 4GB + 64GB variants. The smartphone is also expected to feature a dedicated microSD slot for storage expansion.

The phone may come in two colour options – Glory Silver and Victory Blue.

The phone may pack a 5,000mAh battery with support for 10W fast charging. In terms of connectivity, the Realme Narzo 20A may support Bluetooth 5.0 and 2.4GHz Wi-Fi.

Sharma also shared that the Realme Narzo 20 is expected to be powered by MediaTek Helio G85 SoC. The tweet also suggested that the phone may pack a 6,000mAh battery with support for 18W fast charging and a triple rear camera setup.

The tipster shared a few more details on his YouTube video. The Realme Narzo 20 is expected to feature a 6.5-inch HD+ (720x1,600 pixels) display with a screen-to-body ratio of 88.7 percent. While the phone may offer a single RAM option of 4GB, it may offer two storage options to choose from – 64GB and 128GB. Just like the Realme Narzo 20A, the storage on Narzo 20 can be expanded via a microSD card.

The phone may come in two colour options – Glory Silver and Victory Blue.

The triple rear camera setup on the back is expected to include a 48-megapixel primary sensor with a 6P lens and f/1.8 aperture, an 8-megapixel ultrawide lens with a field of view of 119 degrees, and a 2-megapixel macro lens.

Realme hasn't confirmed any of the specifications yet. All details and pricings are expected to be officially announced at the Realme Narzo series launch event on September 21.