Redmi 11 Prime 5G Set to Launch in India on September 6, Key Specifications Revealed Ahead of Launch: All Details

Redmi 11 Prime 5G will be powered by a MediaTek Dimensity 700 SoC, according to the company. 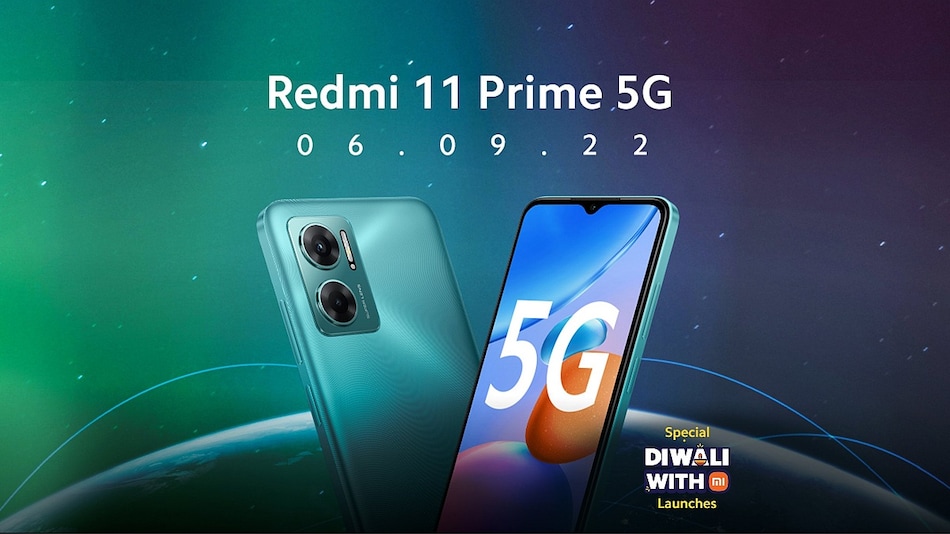 Redmi 11 Prime 5G India launch date has been set for September 6, the company announced on Tuesday. A microsite created ahead of the launch of the handset in the country has revealed key specifications of the smartphone ahead of its debut. It will be powered by a MediaTek Dimensity 700 SoC, and will pack a 5,000mAh battery. The smartphone will also feature a 50-megapixel primary camera, and offer dual-SIM 5G connectivity, according to the microsite by Redmi. It was previously spotted on the IMEI database.

On Tuesday, Redmi, announced via Twitter that the Redmi 11 Prime 5G will be unveiled in India on September 6. Additionally, a microsite for the handset a live on the company's website, and it reveals some specifications of the smartphone.

The Redmi 11 Prime 5G will be powered by a MediaTek Dimensity 700 SoC. The phone will sport a teardrop-style notch on the display to house the selfie camera. It will support dual-SIM 5G connectivity. The smartphone will sport a 50-megapixel dual rear camera setup with an LED flash. The rectangular camera module appears to protrude slightly from the textured rear panel.

The right spine will feature the power button and volume rockers. As per the images shared by Redmi on the microsite, the phone will be launched in at least two colour options. The company is yet to reveal other specifications and pricing of the Redmi 11 Prime 5G in India.

According to an earlier report, the Redmi 11 Prime 5G was spotted on the IMEI database with the model number 1219I, and was codenamed Light. The smartphone is reportedly a rebranded version of the Poco M4 5G, which is said to be a rebranded version of the Redmi Note 11E. The smartphone was also recently spotted on the Xiaomi Security Update schedule list.

To recall, the Redmi Note 11E was unveiled in March with a 6.58-inch full-HD+ display. It is powered by an octa-core MediaTek Dimensity 700 SoC, paired with a Mali-G57 MC2 GPU.