The Redmi 8 update is rolling out over-the-air and will reach all Redmi 8 users over the next few days. 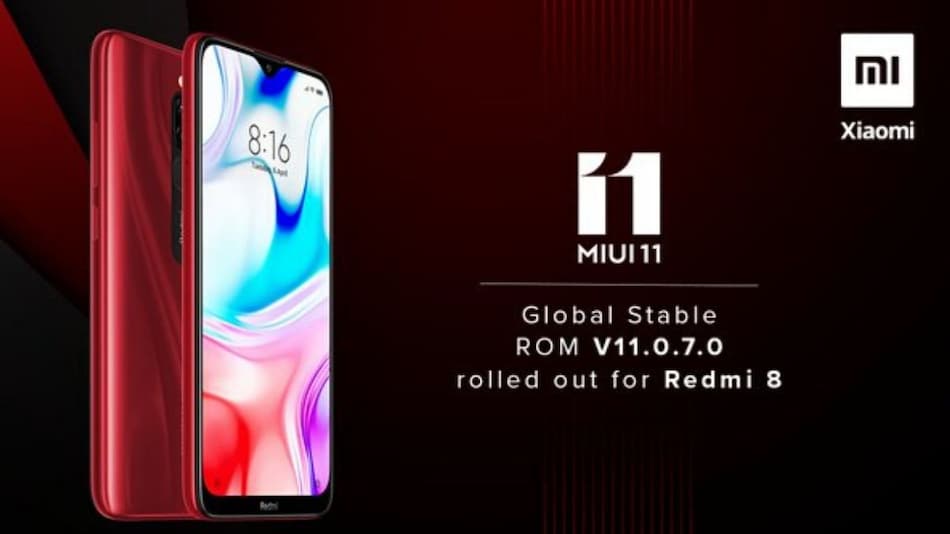 Xiaomi on Tuesday started rolling out the latest MIUI 11 update on its Redmi 8 smartphone, in a bid to improve the smartphone's battery and camera performance. The update is now available to the Indian users. It is rolling out over-the-air and will reach all users over the next few days. Like all updates, Xiaomi will release it in batches. The company shared the news of MIUI 11 Global Stable ROM V11.0.7.0 rollout on Twitter.

"Mi fans, an update that makes the performance champion ready for more #BatteryCameraAction," the MIUI team announced on Twitter.

Apart from mentioning that the update include battery and camera performance enhancements, the company hasn't shared any other details. Even the update size is unknown. The company last month started releasing the same update to a limited set of consumers, but now it has finally started the expanded roll out. If you haven't already received the update on your Redmi 8, you will see if over the next few days.

As it is an over-the-air update rollout, you will automatically receive a notification on your phone once it is ready for you. To manually look for the update, head over to Settings > About phone > Download updates.

To recall, the first version of MIUI 11 was rolled out in Redmi Note 8 last year, which was said to have a minimalistic design along with features including Dark Mode, Always On display functionality, Dynamic Clock on the lock screen etc. The MIUI update was later rolled out on Redmi 8 in November 2019, a month after its initial launch.

Meanwhile, Xiaomi is reportedly is testing a new feature, called 'App Behavior Records' that will send a notification when an app performs suspicious actions. However, the feature is under testing phase and it's unclear whether it will be rolled in MIUI 11.

Global Smartphone Sales Fell Marginally in Q4 and Full Year 2019: Gartner
PM Modi to 'Give Away' His Social Media Accounts to Inspiring Women on Women's Day