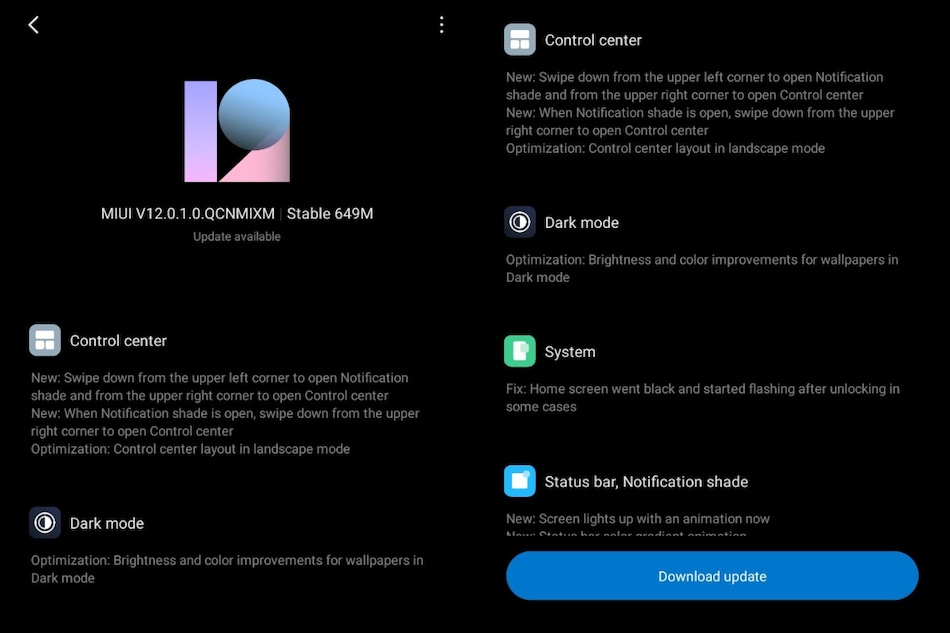 Redmi 8 smartphones are now receiving the MIUI 12 update on a global scale. Users have taken to Twitter to confirm the arrival of the latest update. Screenshots suggest that the new update brings along improvements to Control Center, along with dark mode tweaks. The version number for the latest Redmi 8 update is V12.0.1.0.QCNMIXM. The size of the update is listed to be at 649MB. Redmi 8 users are recommended to install the update under a good Wi-Fi connection and preferably when the phone is sufficiently charged.

Users tweeted about the arrival of the new MIUI 12 update on Redmi 8. PiunikaWeb also reports the arrival of the same in global markets, and claims that Indian and European markets are slated to get it soon. Redmi 8's latest update is 649MB in size and comes with version number V12.0.1.0.QCNMIXM. Eligible users can check for the update in Settings if they haven't already received a notification.

Screenshots of the Redmi 8 update suggest that the new MIUI 12 update brings a new Control Center that opens up if you swipe down from the upper right corner. Xiaomi has also optimised the Control Center layout in landscape mode. It has also improved on brightness and colour of wallpapers in dark mode and has fixed an issue that caused the home screen to go black and start flashing as soon as you unlock the phone. The new Redmi 8 update has also added improvements to the status bar and notification shade with new animations and other changes.

It could be possible that Xiaomi may be rolling out the update in phases, and you may not receive the update immediately on your Redmi 8. It could take a couple of days for the update to reach you and its best to wait for the OTA update to arrive.