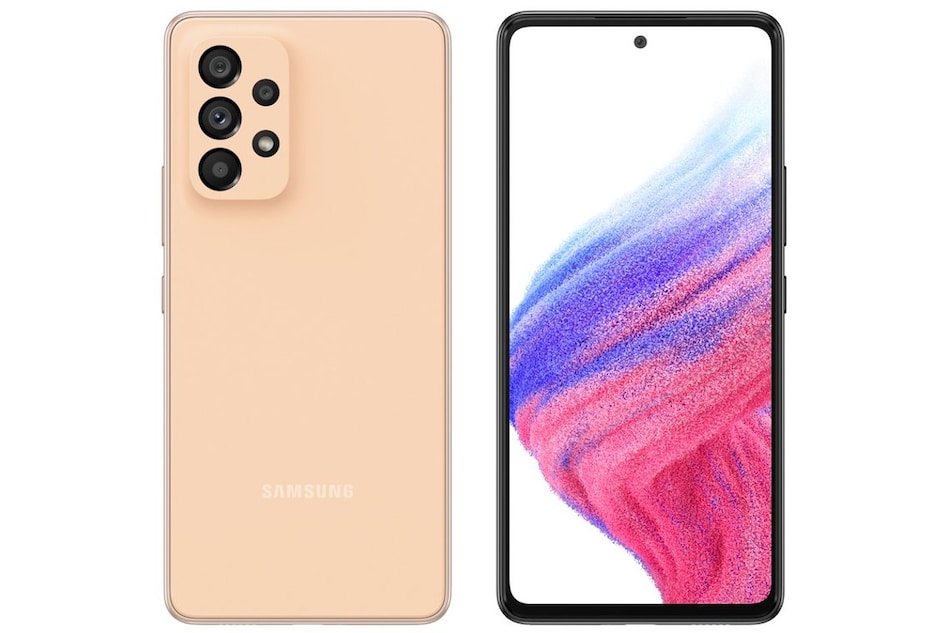 A tipster on Twitter who goes by pseudonym TechInsider leaked the purported Samsung Galaxy A53 5G specifications sheet. Although Twitter suspended the account in question at the time of publishing this article, the details were still available on the Web archives.

In terms of specifications, the Samsung Galaxy A53 5G appears to run on Android 12 with One UI 4.1 and have a 6.5-inch full-HD+ (1,080x2,400 pixels) Super AMOLED display with a 20:9 aspect ratio and a 120Hz refresh rate. The phone also has an octa-core SoC, along with at least 6GB of RAM, according to the specifications sheet shared by the tipster.

Further, the phone appears to have a 32-megapixel selfie camera sensor, with an f/2.0 lens.

The Samsung Galaxy A53 5G will come with at least 128GB of onboard storage, along with microSD card support (up to 1TB), the leaked list shows.

Samsung is also suggested to offer stereo speakers with Dolby Atmos sound. The Samsung Galaxy A53 5G, though, doesn't appear to have a 3.5mm jack, and delivers wired audio output only through the built-in USB Type-C port.

In the past, Samsung ditched the 3.5mm headphone jack from its flagship lineup. The company is now, though, appears to take the same move for its relatively affordable Galaxy A series as well.

The Samsung Galaxy A52 was launched last year with a 3.5mm jack available — alongside the built-in USB Type-C port.

The leaked specifications sheet also suggested that Samsung Galaxy A53 5G would come with other connectivity options such as 5G, Wi-Fi 802.11ac, Bluetooth v5.1, and NFC. It could include an accelerometer, ambient light, gyroscope, and a hall sensor on the part of onboard sensors. The phone also appears to have a 5,000mAh battery. Moreover, it is tipped to measure 159.6x74.8x8.1mm and weigh 189 grams.

A report in December suggested that Samsung could launch the Galaxy A53 5G in two variants, with Exynos and Snapdragon chip options. The India variant of the phone is speculated to come with the Exynos 1280 SoC.

In addition to the Galaxy A53 5G, alleged details about the Samsung Galaxy A33 5G have appeared online.

Dutch website LetsGoDigital in collaboration with tipster Ahmed Qwaider has shared the purported Samsung Galaxy A33 5G specifications that include a 6.4-inch full-HD+ Super AMOLED display with a 90Hz refresh rate and an octa-core Exynos 1280 SoC, along with 8GB of RAM and 128GB storage. The phone is also said to have a microSD card slot for expanding the built-in storage by up to 1TB.

The Samsung Galaxy A33 5G is also said to have the same camera configuration that came with the Galaxy A32 5G last year. This means that we can expect a 48-megapixel primary sensor with an f/1.8 lens, 8-megapixel ultra-wide shooter, a 5-megapixel macro shooter, and a 2-megapixel depth sensor.

Samsung is said to offer a 13-megapixel selfie camera sensor at the front of the Galaxy A33 5G. Further, the phone is said to have an in-display fingerprint sensor and a 5,000mAh battery with 25W fast charging. The handset is tipped to measure 159.7x74.0x8.1mm and weigh 186 grams.

Separately, LetsGoDigital has shared some early renders to suggest the design of the Samsung Galaxy A33 5G. The renders show that the phone has a u-shaped display notch and a rectangular camera module at the back.

Official details about the Samsung Galaxy A33 5G and Galaxy A53 5G are yet to be revealed. However, Samsung is tipped to host a Galaxy Awesome Unpacked launch event this month where both phones would debut. The company also last week introduced the Galaxy A13 and Galaxy A23 as two of its affordable smartphones in the Galaxy A-series lineup.