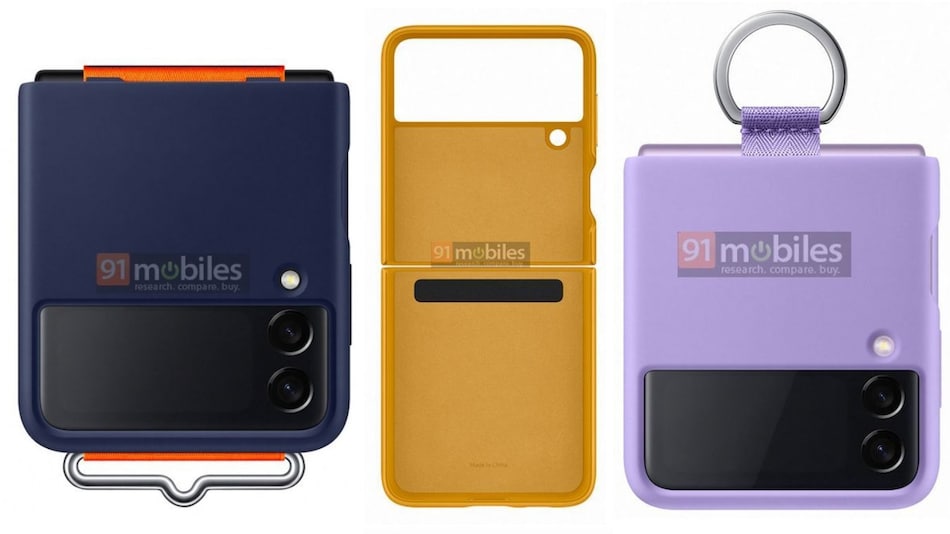 Samsung Galaxy Z Flip 3 case renders have surfaced online ahead of its launch at the Samsung Galaxy Unpacked event on August 11. As per a report, the cases for the clamshell foldable smartphone will be available in leather, clear, silicone + strap, and silicone + ring designs. The cases also reveal the design of the smartphone. Meanwhile, a reported 3C listing of the smartphone reveals that it will come with a 25W fast charging support, essentially debunking previous leaks which claimed that the phone will have 15W fast charging support.

91Mobiles cited industry sources and reported that the cases for Samsung Galaxy Z Flip 3 will be available in Blue, Purple, and Yellow colours. The renders shared by the publication show that they have a rectangular cutout on the front for a dual camera setup and the 1.9-inch secondary display. There is also a hole-punch cutout for the LED flash. The volume rocker and power button are placed on the right edge of the Samsung phone. Apart from the regular cases, there could be one with a strap, and another one with a ring.

In another Samsung Galaxy Z Flip 3-related story, the phone was allegedly spotted on China's 3C certification website. A smartphone with model number SM-F7110, believed to belong to the Chinese variant of the Galaxy Z Flip 3 5G, has been seen with 25W fast charging support. The listing also shows the phone is associated with the EP-TA200 (Adaptive 15W) and EP-TA800 (25W) chargers. There is no confirmation which charger will be bundled with the phone.

This listing essentially contradicts a previous report which said that Samsung Galaxy Z Flip 3 may support a maximum of 15W (9V, 1.67A). Furthermore, there are two more Samsung smartphones with model numbers W2022 and SM-F9260 that also support 25W fast charging.

Last week, Samsung confirmed that it is hosting the next Galaxy Unpacked event on August 11 and it will launch two new foldable phones that are rumoured to be called Galaxy Z Fold 3 and Galaxy Z Flip 3. Both new phones are expected to have a more robust folding design and an upgraded hardware. The Galaxy Z Flip 3 has appeared in Cream, Dark Blue, Gray, Green, Lavender, Light Pink, Phantom Black, and White.