Samsung Galaxy Unpacked 2021: The event is expected to see the unveiling of the Galaxy Z Fold 3 and Galaxy Z Flip 3, apart from wearables. 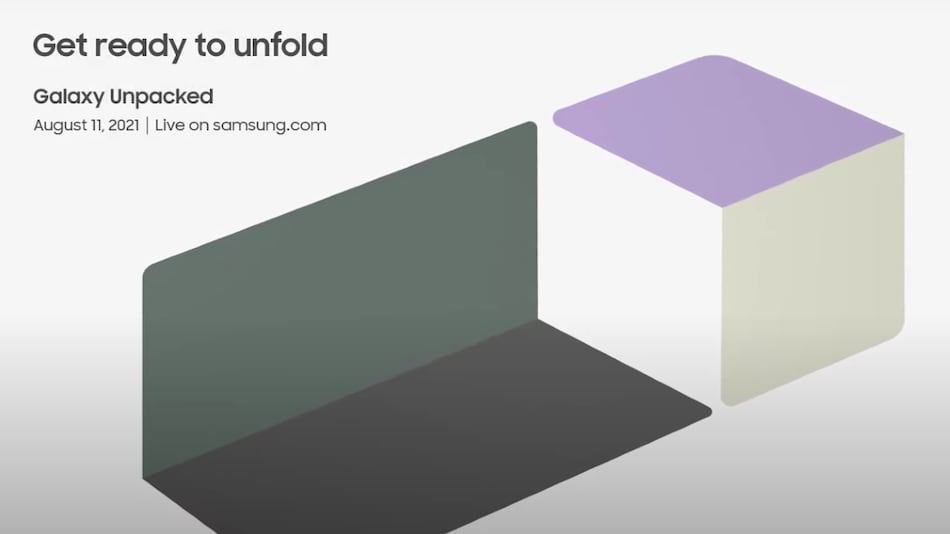 Samsung on Wednesday confirmed that it is hosting the next Galaxy Unpacked event on August 11. Alongside confirming the launch date, the South Korean company teased the launch of its two new foldable phones that are a part of the rumour mill as the Galaxy Z Fold 3 and Galaxy Z Flip 3 for some time. Both new phones are expected to have a more robust folding design and an upgraded hardware. In addition to the official announcement, Samsung Galaxy Z Fold 3 and Galaxy Z Flip 3 price details have been leaked by a European retailer. Custom skin maker Dbrand has also shown off the design of the Galaxy Z Fold 3 ahead of its formal announcement.

The next Galaxy Unpacked event will take place at 7:30pm IST or 10am ET on August 11 where we'll see new Samsung Galaxy flagships, the company announced. The date previously appeared as a part of some rumours.

Until now, Samsung has unveiled new Galaxy Note phones at its Unpacked event in August. The company is, however, changing that trend and seems to be not in plans to launch a Galaxy Note 21 this year. Instead, it is likely to have the new foldable phones to showcase at the virtual event.

“We live in a time of accelerated change — from rapid shifts in work culture to the rise of cutting-edge communication technologies. Now more than ever, there is a need for flexible, versatile mobile devices that can keep up with the fast pace of our lives so we can maximise and enjoy every moment,” the company said on its newsroom site.

Samsung has also teased the launch of its next-generation foldable phones through a video teaser that suggests the arrival of two new models. These are rumoured to be the Samsung Galaxy Z Fold 3 and Galaxy Z Flip 3.

Aside from the new foldables, Samsung is rumoured to have the Galaxy Watch 4 and Galaxy Watch Active 4 smartwatches, Galaxy S21 FE smartphone, and the Galaxy Buds 2 truly wireless (TWS) earbuds ready to debut at its August 11 event.

The next Galaxy Unpacked event will be livestreamed through Samsung's social media channels.

Notably, the surfaced pricing is higher than what was recently reported from South Korea. You may, therefore, get a different price tag in your market.

Separately, Dbrand has tweeted the list of skins and wraps it is offering for the Samsung Galaxy Z Fold 3 ahead of its debut. The marketing move by the Toronto, Ontario-based company has divulged the design of the upcoming phone as well as all its three colour options.

The Galaxy Unpacked event is three weeks away from now. But in the meantime, the rumour mill is likely to suggest further details about the Samsung Galaxy Z Fold 3 and Galaxy Z Flip 3 in the coming days.