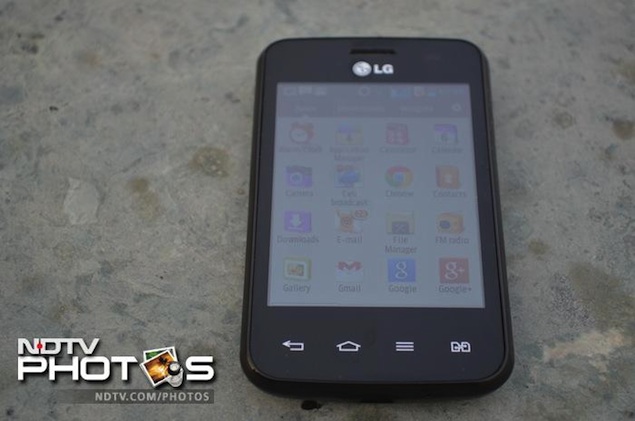 The line between feature phones and smartphones is diminishing each day as Android phones start making their presence felt in the Rs. 5,000 to Rs. 10,000 phone segment. While Indian handset brands are already competing with each other by packing in a plethora of features in their phones, international brands have been a little hesitant. It used to be partly because an Android handset with entry-level hardware specifications doesn't deliver a smooth user experience maybe because the OS is too demanding.
However, with Android 4.1 everyone's hoping that things will change for the good.

LG is offering a dual-SIM Android 4.1 handset in the same segment with the LG Optimus L3 II Dual. The handset is an upgrade to its Optimus L3 Dual phone that it launched last August. Is the phone a good option especially for consumers on a budget? We find out.

Design/ Hardware
The LG Optimus L3 II Dual sports a compact form factor and is just 102mm long and 61mm wide. The smartphone has curved rounded corners. We had a Black colour variant of the phone as our review unit. 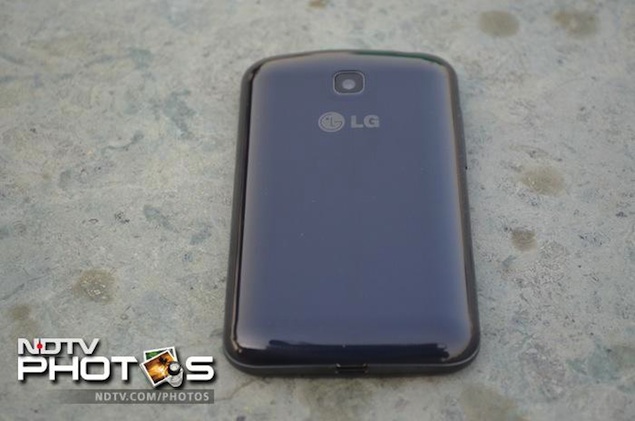 The front houses a 3.2-inch screen and 4 capacitive buttons, namely Back, Home, Menu and a button for switching to the other SIM. The bezel below the display is pretty large and at times makes it inconvenient to reach the buttons without looking. There's a volume rocker key at the right side of the phone, while there are no buttons on the left side. The Power/ Screen-lock key and the 3.5mm headset jack sits at the top while the micro-USB port is located at the bottom.

The phone's appearance is nothing to talk about and is utilitarian at best.

Display
The LG Optimus L3 II Dual comes with a 3.2-inch screen that has a resolution of 240x320 pixels, which is very low compared to other smartphones in the segment. This results in graphics and text appearing less sharp. At times text that has a small font size is even unreadable. Even watching videos or playing games isn't a very pleasant experience. In fact, we'd say the low-resolution display is one of the major flaws of this handset.

However, the screen is not very reflective, and the viewing angles were pretty decent thanks to the IPS panel. The under sun visibility for this smartphone is above average at full brightness levels.

Software/ User Interface
The smartphone runs Android 4.1.2 Jelly Bean and LG has added its own Optimus UI layer on top, majorly changing the look and feel of the interface and enabling users to customise the phone. Interestingly some of the customisations and UI extras offered by LG with its flagship phones such as the Optimus G, have made it to this phone in the same or a lighter avatar.

You can have up to 5 screens that can be populated with widgets and app shortcuts. LG also allows users to choose the phone's default font and font size. You can select from 4 different visual themes, each with a different icon set, home screen wallpaper and app drawer background.  LG even allows you to choose between various animation effects when you swipe from one home screen to another or when you unlock the phone.

LG also allows you to customise the Lock screen giving the ability to select four app shortcuts and a clock or calendar.

LG has also skinned the notification tray and has included toggles for various settings including for sound, data, NFC, Bluetooth, Wi-Fi, and Hotspot among others. It also features a shortcut for system settings, and a control for changing screen brightness.

LG also offers a QuickMemo app that lets users scribble notes on a blank page or on top of a screen shot. The app also has an overlay mode that usually allows you to take notes while running another app but here it's present as a shortcut for invoking the app. We're not sure if people with big hands will find it useful as LG doesn't offer a Stylus with the phone and the phone's screen is really small.

LG has customised nearly all stock-apps including the Gallery and Music apps, adding more functionality in addition to just bringing eye candy. For instance the Music app features a button for locating the video of a song on YouTube. Even the system settings menus have been skinned and are pleasant to look at.

In addition to all of these, the phone brings standard Jelly Bean functionality. Overall, LG has tried to make the phone as different from stock Android, as possible.


Camera
The LG Optimus L3 II Dual sports a 3.2-megapixel-rear camera and doesn't come with a flash. Just like the Optimus G, it can also take pictures with voice commands like 'cheese', 'kimchi', 'LG', 'Smile' and 'Whisky'. The phone's camera app offers various scene mode's including Portrait, Landscape, Sports, Sunset and Night modes, along with settings for ISO, White Balance, Colour effects, and exposure. It also offers a timer. 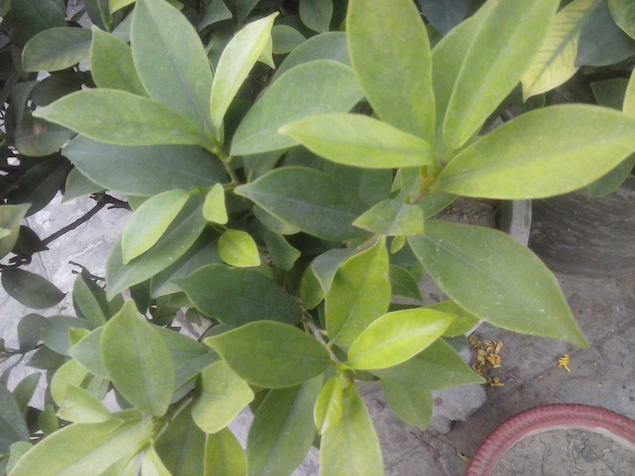 While pictures taken outdoors under daylight were decent, the same cannot be said about the ones taken indoors under artificial light. The latter were grainy and lacked detail.

You can capture VGA resolution (640x480) videos in the video mode. The videos taken with the phone were just about average. 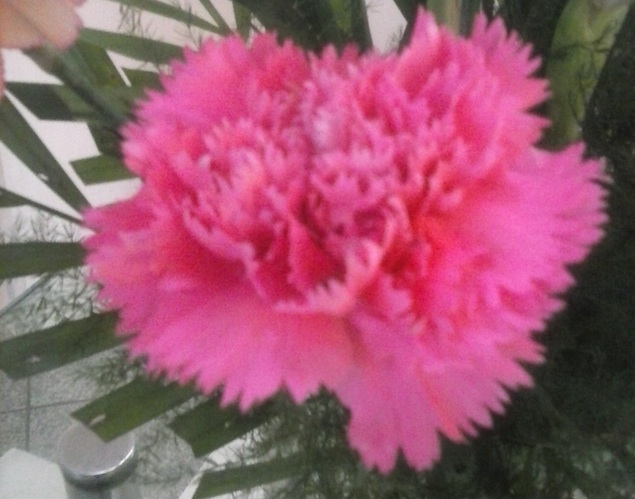 Overall, the phone's camera is fit for casual photography but the quality is nothing to be written home about.

Performance /Battery Life
The LG Optimus L3 II Dual ships with a 1GHz single-core processor that has a clock speed of 1GHz. It also has an Adreno 200 GPU and 512MB of RAM.

Our experience while navigating through the menu and playing casual games like Temple Run and Angry Birds was good. We did notice minor lag while playing some games and while multi-tasking but otherwise the phone performed decently. Here we would like to point out that some games - including the popular Subway Surfer - are not compatible with the phone. 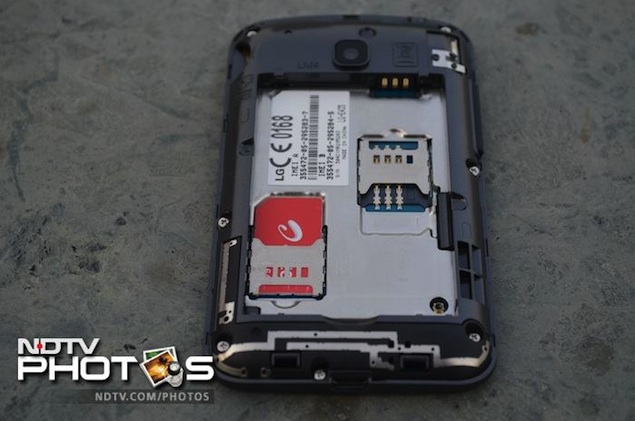 However, the phone was not able to play 720p HD and 1080p video clips. We were able to run .AVI videos natively. The phone offers FM radio functionality.

Strangely, the capacitive touch keys on the phone are not backlit, which means that you can't use the keys in the dark unless you're used to them. We've always advocated the need for manufacturers to switch to a standard three key system similar to stock Android and don't think there's a need for a separate Menu key. The SIM-switch key could have been a hardware key located on the side as it doesn't really serve any purpose in its current avatar.

We also found typing with the phone's default QWERTY soft-keyboard cumbersome because of the small screen. People with big hands would be better off installing a third-party keyboard.

The LG Optimus L3 II Dual comes with the native Android browser as well as Chrome and we found that it renders all webpages well. The phone doesn't come with Adobe Flash pre-installed. The speaker on the phone delivers average quality sound at high volume levels. The speaker is integrated with the phone's earpiece so sound doesn't get muffled even when the phone lies on its back.

Call quality was good with our voice being delivered loud and clear to the other party. The phone is a dual-SIM GSM phone with support for one active and the other in standby mode.

The phone comes with a 1540mAh battery and we were satisfied with the backup that it offered. With mixed usage during the day, including playing games, a few calls, and e-mail and Twitter notifications turned on, we were able to get about one-and-a-half days of backup. Although the battery's capacity isn't very large, we believe that the low-resolution screen helps in optimizing the battery backup offered by the phone.

Verdict
At a price of Rs 7,899, the LG Optimus L3 II Dual is a decent Android smartphone in this price-range. However, the low-screen resolution, some games being not compatible with the phone, the lack of HD video playback and the phone's capacitive keys not being backlit are some of the major concerns that we have with the phone. The lack of a flash might also bother some who'd want the ability to click photos during the night or in low-light conditions. 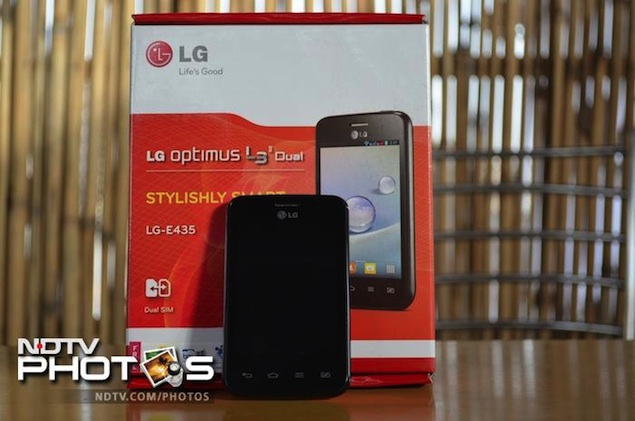 Other options that you can look at include the Samsung Galaxy Young, the Lava Iris 455, Xolo X500 (Review| Pictures) and Spice Stellar Horizon Pro Mi-505.

Long wait for a green card could be ending
Samsung Galaxy Star officially launched for Rs. 5,240