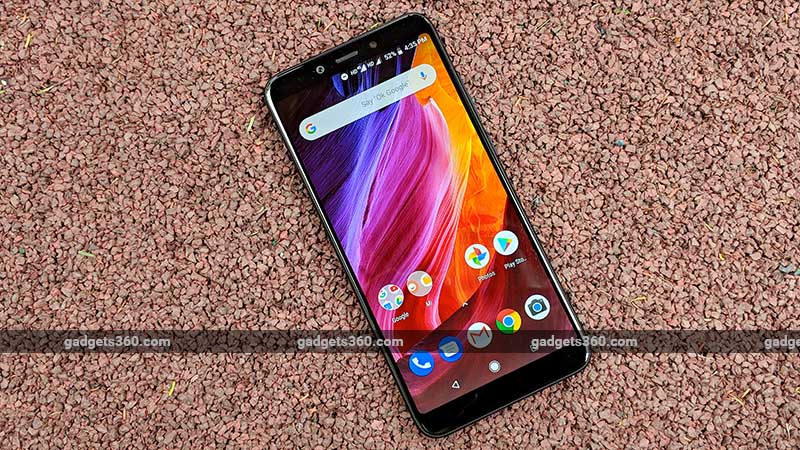 Xiaomi has launched the Mi A2 as its second Android One phone in India. Google originally started the Android One programme to deliver the stock Android experience on entry-level handsets in developing markets. However, there were no new products in India after the initial launches from Karbonn, Micromax and Spice. Google later revived Android One in 2017 to offer users smartphones running stock Android without any manufacturer customisations. The first of these in India was the Xiaomi Mi A1 (Review) which launched last year.

More manufacturers have enrolled into the program since then, but very few devices have made it to India. Nokia, an HMD Global brand, was the first to announce that its entire Android lineup would adopt Android One and all the smartphones that it announced at MWC 2018 have now launched in India. The new Mi A2 promises better hardware while still running bone-stock Android. So should the Xiaomi Mi A2 be the first choice for an Android purist on a budget? We put it to the test.

The Mi A2 is a well-designed smartphone. It has a metal unibody that gives it a premium feel in the hand. The first change you will notice compared to the Mi A1 is that it has a big 5.99-inch display with an 18:9 aspect ratio, which makes the phone tall and narrow. The sides are curved which makes it comfortable in the hand. Our Black review unit had a matte finish which resisted fingerprints to some extent. This phone is quite slippery and we would recommend that you put the case supplied in the box to use.

The power and volume buttons are on the right and offer good feedback when pressed. We found that the power button is well placed, but the volume buttons are a little too high for our liking. Xiaomi has positioned the selfie camera, earpiece, selfie light and a notification light above the display while the space below it is blank. For those curious, this smartphone has a single-colour notification LED.

The USB Type-C port at the bottom has speaker grilles on either side but only the right one houses a loudspeaker. An IR emitter that can be used to control IR-based appliance is at the top along with the secondary microphone. There is no 3.5mm headphone jack so you get a USB Type-C dongle in the box. Xiaomi claims that it has used a high-quality amplifier to improve audio output from the speaker and headphones.

Xiaomi has opted for a dual camera setup at the back, which is now positioned vertically compared to the horizontal setup on the Mi A1. There’s a 12-megapixel primary camera, a 20-megapixel secondary sensor, and an LED flash. This camera module protrudes quite a bit causing the Mi A2 to rock when placed on a flat surface. The fingerprint scanner is next to the camera module, at the natural resting position of either index finger. Xiaomi has opted for a 3000mAh battery to power the Mi A2.

The Chinese smartphone maker has chosen the Qualcomm Snapdragon 660 processor to power the Mi A2. It has eight Kryo 260 CPU cores and an Adreno 512 GPU. The A2 has 4GB of RAM and 64GB of internal storage. Sadly storage isn’t expandable unlike the Mi A1, and you will need to make do with the storage you get. This is a dual-SIM smartphone and has two Nano-SIM slots. There is support for 4G and VoLTE on both SIMs.

The 5.99-inch display sports a full-HD+ resolution, has a pixel density of 403ppi, and uses Corning Gorilla Glass 5 for protection. Viewing angles are decent but the display does not get very bright. You don’t get the option to tweak the output. The Ambient Display feature wakes the phone when you get a notification.

At 3000mAh, the battery capacity is lower than what most other smartphones in this segment offer. The Xiaomi Redmi Note 5 (Review) for example packs in a bigger 4000mAh battery. The Mi A2 supports Qualcomm’s Quick Charge 4+ but you only get a standard 10W charger in the box. Connectivity options on the Mi A2 include Bluetooth 5.0, dual-band Wi-Fi 802.11ac, GPS, A-GPS, GLONASS, and Beidou.

Xiaomi has focused on the cameras of the Mi A2. The 12-megapixel primary rear camera has 1.25-micron pixels and an f/1.75 aperture. The secondary 20-megapixel camera uses 4-in-1 pixel binning with bigger 2-micron pixels and an f/1.75 aperture. Unlike the Mi A1 which had zoom lens for 2X optical zoom with the secondary camera, the one on the Mi A2 should help in low light instead.

The Xiaomi Mi A2 runs stock Android 8.1 Oreo, and Xiaomi has added its Feedback, File Manager, and Mi Drop apps on top. While the Feedback app cannot be disabled or uninstalled, you can go ahead and uninstall the other two. The camera app has also been customised by Xiaomi and is different from the default Android app - more on that in a bit. Of course, this phone also has gets Google apps preinstalled. When we started reviewing the phone it was running the June security patch but we got a software update during the course of the review bringing us up to date with the August security patch.

If you are an Android purist, you will like the software experience on the Mi A2. It has an app drawer, and you need to swipe up to see all your installed apps. You also get Google Feed by swiping right from the homescreen and summon the Google Assistant by long-pressing the home button. We found that the phone lacks an app to let you use the IR emitter, which means that you cannot start controlling appliances right out of the box. You can download the Mi Remote app from the Play Store, but Xiaomi told Gadgets 360 that it will be rolling out an update after which the app will be preinstalled. The only gesture the Mi A2 supports is that double-clicking the power button will immediately launch the camera app.

We have used the Nokia 7 Plus (Review), which has the same processor as the Xiaomi Mi A2, and was also running stock Android. The Xiaomi Mi A2 offers similar performance and we found no lag or stutter when flipping through the phone’s UI and multitasking. With 4GB of RAM, you should be able to multitask easily without the phone automatically killing apps in the background. The fingerprint scanner is quite fast and was quick to unlock the phone.

We played games such as PUBG, Clash Royale, and Asphalt 9. PUBG ran at medium settings by default and we did not have any issues with performance. We played the game for 25 minutes, surviving an entire round, and found that the phone did get warm to the touch without getting uncomfortably hot. Asphalt 9 ran at the default settings without any hiccups either.

In our HD video loop test, the smartphone ran for 8 hours and 13 minutes, which is below average. We have seen the Xiaomi Redmi Note 5 Pro (Review) and the Redmi Note 5 last for close to 16 hours thanks to their bigger batteries. With our usage comprising of active WhatsApp and Gmail accounts, an hour worth of games, some time with Instagram, and making a few calls, the battery saver mode kicked in after 7 and 30 minutes. If your usage is similar, you will need to keep the charger handy. The supplied charger takes close to 2 hours to charge the Mi A2 completely but so should invest in a Qualcomm Quick Charge certified charger to speed that up.

Xiaomi has worked on its camera app and it is different from the stock Android camera. You get Short Video, Portrait, Square, Panorama, and a Manual mode, apart from the usual Photo and Video modes. The Manual mode lets you set white balance, focus, shutter speed and ISO, and also lets you choose between the ‘regular’ and ‘low light’ lenses. Xiaomi claims that it has tweaked the Portrait mode such that it uses the 12-megapixel camera in favourable light conditions but switches to the 20-megapixel camera in low light, but we found that this did not actually happen. While one lens is in use, the other acts as a depth sensor.

The Mi A2 is fairly quick to meter light and lock focus. Photos taken with the Mi A2 outdoors have a good amount of detail and colours are quite accurate. Zoom into an image and you can still see details without much loss. We noticed that the camera app also switched HDR on automatically when the scene required it, bringing out more details from the shadows and delivering slightly sharper results. Autofocusing is quick when taking macros and we found that the Mi A2 could focus on relatively small objects. Macros were sharp and the phone managed good separation between the subject and the background.

In low light, the Mi A2 bumps the ISO up and lowers the shutter speed to help the primary camera capture more light, instead of switching to the secondary one. Xiaomi should have taken advantage of the better sensor for low-light shots by switching automatically, but you can do this yourself in Manual mode. These photos also have decent amounts of detail but we noticed aggressive noise reduction being applied in darker areas, leading to a watercolour effect when zooming in.

Selfies are detailed and we got sharp results when shooting indoors. The selfie fill light comes in handy when shooting in low-lit conditions. HDR is available for the selfie camera and kicks in automatically when required. You can also select the level of beautification you need, and an Advanced mode which lets you tweak different beautification parameters.

Video recording on the Xiaomi Mi A2 maxes out at 4K for the primary camera and 1080p for the selfie camera. You also get the option to shoot in 1080p at 60fps rather than 30fps with the rear camera, but we found that it had difficulty locking focus at the higher frame rate. Video stabilisation is available for the rear camera, and helps you capture steady footage.

Xiaomi Mi A2 in pictures

Verdict
The Xiaomi Mi A1 (Review) was an obvious choice for anyone looking for stock Android on a budget. Things however have changed, with HMD Global bringing in Nokia handsets that run pure stock Android as well. Xiaomi will have to compete on pricing, and that’s exactly what it has done with this launch.

The Xiaomi Mi A2 gets the cameras right and is amongst the best camera phones at this price point. Also, the powerful Snapdragon 660 processor has so far been restricted to more expensive phones, making this phone a tempting option for someone looking for a performer on a budget.

Xiaomi has priced the Mi A2 at Rs. 16,999 which is quite aggressive for the hardware it offers. However, there are a few chinks in the Mi A2’s armour. Its battery capacity is below average, resulting in relatively poor battery life. Xiaomi has also ditched the 3.5mm headphone jack and there’s no microSD card slot, which are both things that buyers look for. If you can't do without stock Android and want good cameras without paying too much, then the Mi A2 should check all your boxes. If you're okay with MIUI, the Xiaomi Redmi Note 5 Pro (Review) is still a good alternative at a slightly lower price. You might also want to keep an eye on the upcoming Honor Play.

Is Xiaomi Mi A2 the best Android One smartphone in India? We discussed this on Orbital, our weekly technology podcast, which you can subscribe to via Apple Podcasts or RSS, download the episode, or just hit the play button below.