The Ray Kanabis has a 1.28-inch colour touchscreen and an IP68 rating for dust and water resistance. 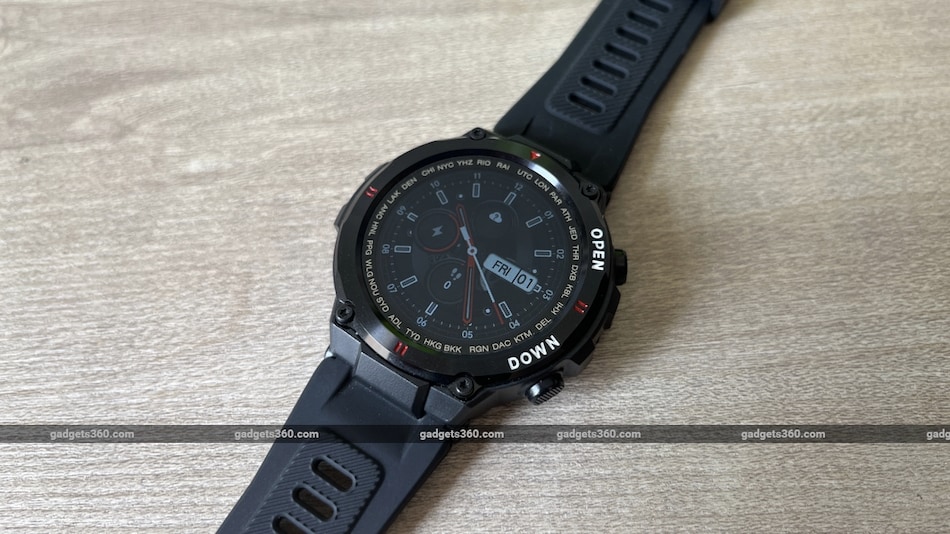 The Just Corseca Ray Kanabis is priced at Rs. 5,999 in India

Smartwatches aren't typically built to be rugged. They are electronic devices though, and wearers need to make a lot of effort to protect their many delicate components. There are some exceptions, such as the device I'm reviewing here. Priced at Rs. 5,999, the Just Corseca Ray Kanabis is designed to withstand the elements, with IP68 dust and water resistance and a rubber wrist strap. It supports tracking various activities, and has a big, sporty dial that inspires confidence.

The Just Corseca Ray Kanabis features a 1.28-inch colour touchscreen, and heart rate and SpO2 monitoring. It's also compatible with both Android and iOS. Is this the best rugged entry-level smartwatch you can buy right now? Find out in this review.

The Just Corseca Ray Kanabis has two physical buttons on the right, but you need to use the touch screen for navigation and controls

While many affordable smartwatches from upstart brands are little more than notifiers for the apps on your phone, the Just Corseca Ray Kanabis is closer to a proper smartwatch since you can use it to answer phone calls. It is priced relatively high at Rs. 5,999 compared to similar products, and this might be partly because of the Casio G-Shock-inspired rugged design, which I liked a lot.

Complementing this look is the fact that the smartwatch is IP68 rated for dust and water resistance, which should help it withstand the elements. The Just Corseca Ray Kanabis is available in three colours: black, green, and blue. I think all the colours looked good, although the black one matches the preinstalled watch faces the best. The bottom of the smartwatch has an optical sensor for heart rate and SpO2 measurements.

The Just Corseca Ray Kanabis has a round 1.28-inch IPS LCD touch display with a resolution of 240x240 pixels and a UV reflective coating for better visibility under direct sunlight. There are two buttons on the right side, both of which can be used to wake the screen. The button on the top serves as the Back and Home button if you are within a menu or app, while the bottom one lets you cycle through the preinstalled apps on the device. This smartwatch works primarily with tap and swipe gestures for navigating the interface and making selections.

Included with the Just Corseca Ray Kanabis is a pre-attached rubber strap, but this can be removed and replaced with any aftermarket 44mm watch strap. The included strap is waterproof and felt quite sturdy. It has plenty of adjustment points that helped me get a comfortable fit. Also included in the box is a magnetic pogo-pin charger to charge the watch.

A key feature of the Just Corseca Ray Kanabis is the ability to use it as a hands-free speakerphone. The device can be paired with any smartphone as a hands-free device using Bluetooth, and has a microphone and speaker to allow you to answer phone calls. You can sync notifications from your paired smartphone and display them on your wrist, but you can't reply to them from the device. This smartwatch has a 400mAh battery.

Although some affordable smartwatch manufacturers such as Noise and Realme have their own apps which enable their devices to function, Just Corseca relies on the third-party Da Fit app. I had previously used this with the Fire-Boltt Talk smartwatch, and it is available for both iOS and Android.

Interestingly, this is not the only similarity that the Just Corseca Ray Kanabis shares with the Fire-Boltt Talk. Apart from the fact that both smartwatches have built-in speakerphone capabilities and use Bluetooth audio pairing to enable the functionality, the user interfaces of the two devices are quite similar in terms of the preinstalled apps, fonts, menus, and controls.

Perhaps the most noticeable differences are the watch faces on these two devices. The Just Corseca Ray Kanabis has four preinstalled watch faces that are designed to suit its rugged aesthetic. These can be previewed and selected using the Da Fit app. There is a tab to download additional watch faces. While some of downloadable ones were nice, I preferred the four preinstalled options and stuck to the default one for most of my review.

The user interface is a bit basic, but is entirely functional and covers the feature set of the Just Corseca Ray Kanabis suitably. A Quick Settings drop-down menu gives you quick access to basic functions such as brightness and connection status, and also shows the day, date, and battery level.

Swiping from left to right on the screen brings up the app list, and swiping right to left cycles through the health trackers such as steps, sleep, heart rate, blood pressure, SpO2 and the speakerphone function. Swiping upwards from the bottom shows unread notifications from your smartphone.

I found interacting with the screen on the Just Corseca Ray Kanabis to be a bit iffy. Swipe gestures sometimes didn't register, while taps were often triggered accidentally, including one occasion on which I accidentally reset the smartwatch and had to go through the pairing process all over again.

The Da Fit app is well designed, and offers reliable connectivity and easy access to health tracking data, basic settings, and preferences for the smartwatch. You can use it to change the watch face, enable notifications for certain apps, set alarms, use the smartwatch as a shutter remote for your smartphone camera, and more.

Since the Da Fit app is compatible with both Android and iOS, the Just Corseca Ray Kanabis is device-agnostic. The app experience will naturally vary depending on your smartphone's operating system. Once set up, the smartwatch works reasonably well for health and fitness tracking functions on its own even when not connected to the paired smartphone. I tested the Just Corseca Ray Kanabis on Android with a OnePlus 9 (Review).

For functions such as timely push notifications, you do need to have the smartwatch and phone connected at all times. This worked well for me, and I was also able to specify which apps could push notifications to the smartwatch. The list of supported apps is decent, and includes popular ones such as WhatsApp, Instagram, Twitter, and Facebook, in addition to the default phone and messages system apps.

The screen of the Just Corseca Ray Kanabis can be woken in two ways – via a lift-to-wake gesture or by pressing either of the physical buttons on the smartwatch. Disappointingly, tapping the screen does not wake it, and the lift-to-wake gesture was a bit unreliable for me as it occasionally did not register

The ability to tap the screen to wake it would have been useful in such situations, since pressing either button requires a bit more effort. Pressing the top button on the home screen is the only way to turn the display off as there is no other quick gesture (such as covering the screen with your palm) to do this. It's either that or wait for the screen time out automatically after a preset interval.

There are a handful of sport and activity modes including walking, running, cycling, skipping, badminton, basketball, and football. For this review, I stuck to the basics – walking and climbing stairs – to track activity. I also tested sleep, heart rate, and SpO2 tracking.

When manually counting 1,000 steps, the Just Corseca Ray Kanabis measured 1,077 steps, an error margin of almost eight percent. This remained around the same even over longer distances and higher step counts, as against the readings from my Apple Watch Series 5. Distance measurements when walking were roughly on par with what the Apple Watch calculated, despite the considerable difference in steps counted.

Heart rate tracking was accurate, matching my Apple Watch and a pulse oximeter's readings while sitting down, but was off by up to seven beats per minute compared to the Apple Watch while walking. There were times that the heart rate readings on both devices were similar when I was wearing both smartwatches at the same time, so it's difficult to pinpoint the cause of this anomaly.

SpO2 tracking was random and unreliable, offering completely different readings than a pulse oximeter. Blood pressure readings were strange and seemed to change wildly with every measurement. As I've recommended before, you need proper medical-grade equipment to measure blood pressure, and the optical sensors on smartwatches cannot be relied on for accurate readings. Sleep tracking was decent, but the data it captured was a bit basic and really only accurately told me how many hours I had slept the previous night.

Using the Just Corseca Ray Kanabis as a hands-free speakerphone for calls was easy and convenient. Calls sounded loud and clear provided I raised the device to my face. This also helped the microphone pick up my voice clearly, and the experience was decent for short calls. You can also use the speaker to play audio if you like, but the sound isn't tuned for this function, and as expected, music sounded a bit tinny.

Other functions on the watch include a media controller app to control playback of music on your smartphone, a shutter app to remotely control the camera when the smartphone is positioned away from you, and a clone of the Flappy Bird mobile game that can be played on the smartwatch itself.

Battery life on the Just Corseca Ray Kanabis depends on your usage. I was able to use it for around seven days on a single charge with frequent notifications, a constant connection to my smartphone, regular fitness and heart rate tracking, and occasionally taking calls on the device. This is decent enough for a device in this price range, although it is considerably lower than the company's claimed figure of 15 days.

Although the Just Corseca Ray Kanabis looks good and has plenty of features, the actual usage experience wasn't quite as good as I had expected for the price. The speakerphone functionality and notifications from apps work well, the Da Fit app is decent on the whole, and battery life is good. However, fitness and health tracking are iffy at best, putting the device at a considerable disadvantage  compared to similarly priced devices such as the Realme Watch 2 Pro.

The Just Corseca Ray Kanabis might be worth considering for basic smartwatch functionality. That said, options such as the Realme Watch 2 Pro and Fire-Boltt Talk offer better overall performance at more affordable prices, and are especially worth considering if you want to spend less.