Nothing Phone 1 users are required to have Nothing OS version 1.1.4 or higher for this update. 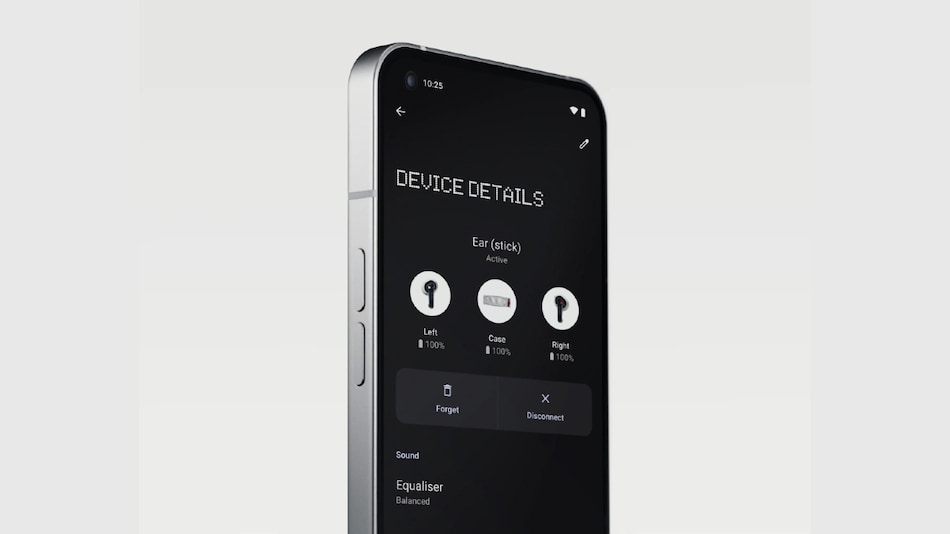 Nothing Ear Stick true wireless (TWS) earbuds launched in India last week and are set to go on sale starting from November 4. With their release a few days away, Nothing has started rolling out an update for Nothing Phone 1 that seamlessly integrates its features and customisation options into the Device Details menu. Previously, these features for the Nothing Ear (1) TWS earbuds were accessible via the Ear 1 app. The company has also rebranded the Ear 1 app to Nothing X on Google Play and App Store.

Nothing announced on Tuesday that a new Nothing OS update is being rolled out that integrates the Nothing Ear Stick features and customisation options into Device Details, which can be easily accessed via Quick Settings. This update is available to all Nothing Phone 1 users who have Nothing OS version 1.1.4 or higher installed.

This update brings the custom gesture control feature for the Nothing Ear Stick. It will also allow users to manually set the low, mid, and high frequency levels in the equaliser. There are also options to toggle in-ear detection and low-lag mode. Users will also be able to check the battery levels of each earbud and the charging case. The Find My Earbuds option is also included in the update. Users will also be able to download future firmware updates from the Device Details menu.

Furthermore, the Ear 1 app icon will be hidden for Nothing Phone 1 users after installing the update. The Nothing Ear 1 features will also be now accessible via Device Details.

The Nothing Ear Stick is set to go on sale in India from November 4 at a launch price of Rs. 8,499.

Further reading: Nothing Ear Stick, Nothing Phone 1, Nothing X, Nothing

Black Panther Wakanda Forever, Enola Holmes 2, Drishyam 2, and More: November Movie Guide to OTT and Cinemas
Featured video of the day
The Future of Glass is Here, And A Review of The Asus ROG Phone 6