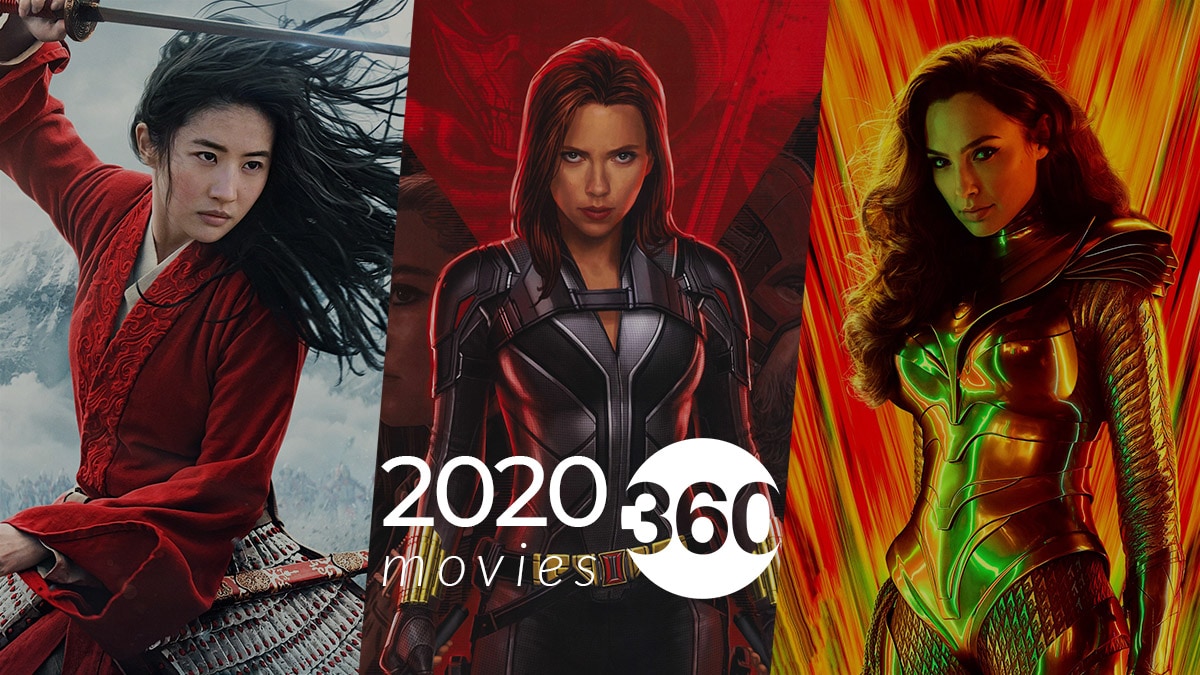 2019 was a landmark year for movies, especially for Disney, which propelled past its own box office record thanks to Avengers: Endgame — the biggest movie of all time — The Lion King, and Frozen II. In 2020, the start of the new decade promises a bit of a clean slate, with no big mash-up movies or remakes in store. Of course, there are still plenty of big hitters around. We've got two entries apiece in Marvel Studios, DC, and Sony's Marvel universes, including the return of Black Widow and Wonder Woman. There's a new movie in store from Christopher Nolan, in addition to the return of Fast and Furious, Minions, King Kong, and Ghostbusters.

And after a year filled with Disney's remakes of past hits, we will be treated to three original efforts from Pixar and its own studio in 2020. Speaking of animation, there are also upcoming movies involving Tom and Jerry, Scooby-Doo, and Sonic the Hedgehog. And oh, James Bond is back after five years, though in terms of time, nothing can beat the return of Tom Cruise's Top Gun after over three decades. Closer to home, we've got a few historical dramas, Aamir Khan remaking a Hollywood movie, and Farhan Akhtar in a boxing film. Kabir Khan will give us a film on India's 1983 Cricket World Cup success, and Sanjay Leela Bhansali has roped in Alia Bhatt to play a red-light district matriarch.

Note: for Hollywood movies, most release dates are for the US, except wherever specifically mentioned.

Deepika Padukone plays an acid-attack survivor in a film inspired by the life of Laxmi Agarwal, from Raazi and Talvar writer-director Meghna Gulzar.

Based on the 17th-century Battle of Sinhagad, in which the Marathas fought the Mughals, respectively led by General Tanaji Malusare (Ajay Devgn) — serving Chhatrapati Shivaji — and Udaybhan Rathod (Saif Ali Khan). Kajol stars as Tanaji's wife.

In his first role since Avengers: Endgame, Robert Downey Jr. is a Victorian England-era doctor and veterinarian who can speak to animals and prefers them over humans, but is forced to set sail on an adventure to find a cure for Queen Victoria's grave illness.

After Aladdin, Guy Ritchie returns to his action crime roots with this story of an American immigrant (Matthew McConaughey) who has decided to cash out his marijuana empire in London. Charlie Hunnam, Henry Golding, Michelle Dockery, Jeremy Strong, Eddie Marsan, Colin Farrell, and Hugh Grant star alongside.

Seventeen years later, Will Smith and Martin Lawrence return to wrap up their buddy cop trilogy, which reunites the detectives after a mob boss desires revenge close to their official retirement.

Blake Lively, Jude Law, and Sterling K. Brown star in this spy thriller from the producers of James Bond, which follows a woman who discovers that a plane crash that killed her family wasn't accidental. You know where this goes.

In this Suicide Squad spin-off set in the DC film universe, a Joker-less Harley Quinn (Margot Robbie) teams up with three more female vigilantes to save a young girl from a brutal, iron-fisted crime lord (Ewan McGregor).

Watch the First Trailer for Birds of Prey

Delayed to make time for the redesign of its blue speedster in the face of criticism, this video game adaptation follows Sonic (Ben Schwartz) visiting Earth, teaming up with a former cop (James Marsden), and evading Dr. Robotnik (Jim Carrey), a scientist interested in world domination.

Watch the New Trailer for Sonic the Hedgehog

Pixar's next film is set in a suburban contemporary fantasy world and follows two elf brothers (Tom Holland and Chris Pratt) who set out on a quest to rediscover magic so they can spend one day with their father.

Watch the First Trailer for Onward

John Krasinski returns as director on this sequel to the 2018 hit, which forces the family — Emily Blunt and her two on-screen kids — to venture out into the world, where the creatures that hunt by sound aren't the only threats.

Disney's wave of live-action remakes continues with this Chinese folklore tale about a young woman who takes her ailing father's place in the army. It's got an all-Chinese cast, thankfully, and it's one of the most expensive movies of all time, with a reported buget of $300 million.

You know we've hit peak “cinematic universe” when Rohit Shetty crafts one for his over-the-top cops. Akshay Kumar is the new eponymous entrant as the chief of an anti-terror unit, with Katrina Kaif as his love interest, and Ajay Devgn and Ranveer Singh cameoing as Singham and Simmba.

Delayed several times, this last entry in Fox's erstwhile X-Men world is about five young mutants — including Game of Thrones' Maisie Williams — trying to escape a secret facility while discovering the extent of their abilities.

Daniel Craig returns as James Bond for the fifth and final time. Set five years after Spectre, a semi-retired Bond must find a missing scientist after a new villain (Rami Malek) poses “a danger the likes of which the world has never seen before.”

Watch the First Trailer for No Time to Die

India's surprising success at the 1983 Cricket World Cup is told through the eyes of captain Kapil Dev (Ranveer Singh) in this biopic from director Kabir Khan.

The first Marvel movie since Avengers: Endgame jumps into the past — shortly after Captain America: Civil War — and follows Scarlett Johansson's titular character as she is forced to confront her past. David Harbour, Florence Pugh, and Rachel Weisz also star.

The first feature animated Scooby-Doo movie is going to be an origin tale for the gang, telling us how a young Scooby and Shaggy met, and then teamed up with Fred, Daphne, and Velma to form Mystery, Inc. Warner Bros. hopes it will kick off a Hanna-Barbera Cinematic Universe.

This ridiculous franchise somehow continues with Fast Five director Justin Lin returning to (hopefully) reinvigorate it. Most of the old gang is back — including Jordana Brewster and Charlize Theron — and they are joined by new faces in John Cena and Michael Rooker.

Pushed from last year, Eoin Colfer's 2001 novel of the same name is getting the big-screen treatment 19 years after it was first announced. It involves a 12-year-old criminal mastermind, fairies, and a possible robbery.

The second DC film of the year reconnects with Wonder Woman (Gal Gadot) seven decades on in the eighties, where she's (somehow) reunited with her old love (Chris Pine) while going up against two new enemies (Pedro Pascal and Kristen Wiig).

In Pixar's other original movie in 2020, a music teacher's (Jamie Foxx) soul is accidentally separated from his body and transported to a realm where souls develop and gain passions before passing into a newborn. There, he meets a soul-in-training (Tina Fey) who has been trapped for years.

Watch the First Trailer for Soul

For more than thirty years — as much time since the first film — Tom Cruise's Navy aviator has avoided promotion to remain in the air as a test pilot. The man with no future is forced to reckon with the ghosts of his past after he encounters his late best friend's son (Miles Teller) in training for a special mission.

Minions: The Rise of Gru

This sequel to the 2015 billion-dollar hit follows the tiny, yellow creatures as they encounter a young Gru — their eventual leader — for the first time.

A video game character (Ryan Reynolds) finds out he's in a video game and then tries to make himself the hero. Wait, isn't this the plot of Wreck-It Ralph? Anyhoo, Jodie Comer, Joe Keery, and Taika Waititi star alongside.

After a critically and commercially unsuccessful reboot, Sony rejigs the machine to produce a direct sequel set 30 years after Ghostbusters II. It follows two children and their mother (Carrie Coon) who discover their link to the original gang — most of whom are retuning — after moving to a farm. Paul Rudd is new to the cast.

Watch the First Trailer for Tenet

Sony's own Marvel universe expands with this tale about a scientist (Jared Leto) suffering from a rare blood disease who attempts to cure himself and instead becomes afflicted with a form of vampirism. Adria Arjona, Matt Smith, Jared Harris, and Tyrese Gibson part of the cast.

Ranbir Kapoor plays a father and his titular son who are part of a dacoit tribe that fought for their independence from the British colonialists in the 19th-century. Sanjay Dutt, Vaani Kapoor, Ronit Roy also star.

Bhuj: The Pride of India

Set during the 1971 Indo-Pak War, the story of a squadron leader (Ajay Devgn) in-charge of the Bhuj airport who helped reconstruct an air force base with the help of 300 local women. Sanjay Dutt, Sonakshi Sinha, and Rana Daggubati have supporting roles.

Alia Bhatt will play the titular brothel owner and matriarch in Sanjay Leela Bhansali's next venture, based a chapter of S. Hussain Zaidi's book, “Mafia Queens of Mumbai”.

This period prequel to the Kingsman series follows Ralph Fiennes as Duke of Oxford and his protégé as they put a stop to tyrants and criminals. Gemma Arterton, Matthew Goode, Daniel Brühl, Djimon Hounsou, and Charles Dance are part of the cast.

Shoojit Sircar's dream project about the titular revolutionary freedom fighter (Vicky Kaushal) comes to life. Udham is best known for taking revenge for the 1919 Jallianwala Bagh massacre by killing Punjab's then-lieutenant governor in 1940 London, for which he was subsequently hanged by the British.

The first film was total carnage, so it makes sense that Tom Hardy's journalist and the titular symbiote are next taking on a serial killer (Woody Harrelson) and his own alien symbiote who is actually called Carnage. Andy Serkis directs.

Death on the Nile

Chanakya and Pinjar director Chandraprakash Dwivedi helms this epic historical drama about the life of Prithviraja III, who ruled parts of north-west India in the 12th century before his defeat and execution at the hands of the Ghurids. 52-year-old Akshay Kumar will play a man who died in his mid-20s.

This is what it's been building to since the 2014 Godzilla reboot, and the film's title tells you all you need to know. Alexander Skarsgård, Millie Bobby Brown, Kyle Chandler, Rebecca Hall, Brian Tyree Henry, Eiza González, Jessica Henwick, Julian Dennison, and Zhang Ziyi will play the humans.

Ajay Devgn plays coach Syed Abdul Rahim in this sports biopic, who is considered the architect of modern Indian football and sparked the national team's golden era between 1952–1962. Badhaai Ho director Amit Sharma is behind the camera.

Raya and the Last Dragon

Disney Animation's first original film in four years — since Moana — is about the titular warrior (Cassie Steele) who's looking for the last dragon in the world. Little does she know that she, a water dragon (Awkwafina), is trapped in a human body.

Here's the First Concept Art for Raya and the Last Dragon

Steven Spielberg is behind this remake of the multi-Oscar-winning 1961 film adaptation, though it's said to stick more to the original Broadway musical script. It's about two young adults, associated with rival street gangs, falling for each other in 1950s New York.

Aamir Khan stars in Tom Hanks' role in this remake of Forrest Gump transported to Bollywood, which will hence run through the events of India's history. Kareena Kapoor plays the love interest, played by Robin Wright in the original.

The second 2020 film based on a Hanna-Barbera cartoon is a live-action and animation hybrid. It follows a young adult (Chloë Grace Moretz) who teams up with the titular cat to stop the titular mouse from ruining an important event. Strangely not a part of the aforementioned cinematic universe.

In the near future, humans figure out how to draft soldiers from the past — Chris Pratt among them — to fight a losing war against alien forces. Yvonne Strahovski, J. K. Simmons, and Betty Gilpin also star. The Lego Batman Movie director Chris McKay at the helm.