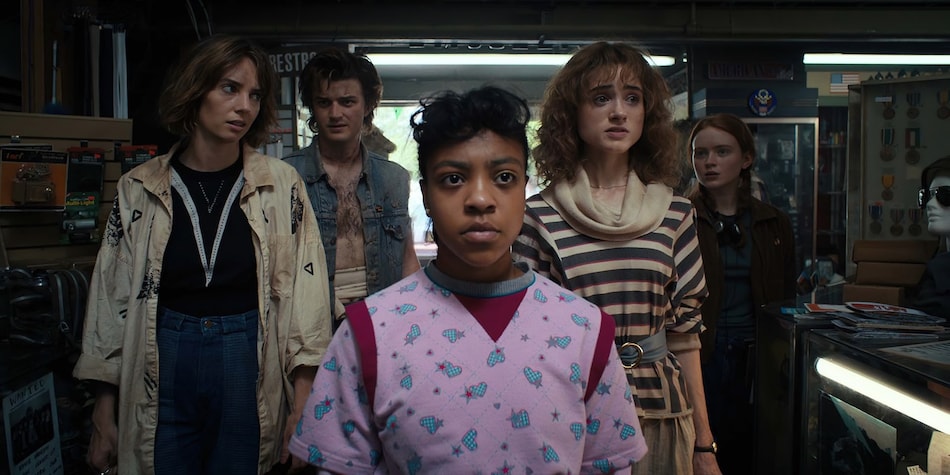 Stranger Things 4 Volume 2 episodes are longer than ever

Stranger Things 4 is, once again, the biggest name on TV two months on from its premiere, thanks to a super-sized conclusion to the fourth season. Volume 2 — as it's officially called — will no doubt set up the fifth and final season that's already been confirmed. But how many of our favourites will make it there? You can find out when Stranger Things 4 Volume 2 drops today on Netflix worldwide. That's not the only major show approaching its end in July. Breaking Bad spin-off Better Call Saul enters its final stretch — that's season 6 part 2 — premiering July 12 on Netflix in India. It picks up from that explosive death on the mid-season finale, and should've more of those in store for us as we approach the series finale.

Meanwhile, close to home, all of Netflix, Disney+ Hotstar, and Amazon Prime Video have revealed their customary original series for the month. Prime Video goes first on July 8 with Modern Love Hyderabad, the Telugu-language adaptation of the American rom-com anthology from showrunner Nagesh Kukunoor. Hotstar Specials is next on July 15 with Shoorveer, an armed forces thriller that brings together the best of the best from the Indian Army, Navy, and Air Force. That leaves Netflix, which has a returning original — a rare moment that's occurred in back-to-back months now — with the second season of comedy-drama Masaba Masaba, available July 29 on its platform.

Vikram, Ms. Marvel, Koffee with Karan, and More on Disney+ Hotstar in July

That's not all. The critically-acclaimed mockumentary What We Do in the Shadows returns for a fourth season, expected July 13 on Disney+ Hotstar in India. And Netflix is ready to offer us a new take on Resident Evil, a property that's yet to perform critically. Maybe the eighth time is the charm?

You can read more about all those seven TV shows below — and you can discover the full list of upcoming web series at our entertainment hub. With that, here's our July 2022 TV guide for Netflix, Disney+ Hotstar, and Amazon Prime Video.

When: July 1
Where: Netflix

Five weeks after it premiered, the fourth season of Stranger Things returns for a two-part mega-sized finale. Spoiler alert for Stranger Things 4 Volume 1. The Hawkins Gang's battle with Vecna — revealed to be Dr. Brenner's first experiment, One (Jamie Campbell Bower) — will unfold over nearly four hours in total.

“Chapter Eight: Papa” is 85 minutes long, which makes it the second longest Stranger Things episode of all time. But it will actually end up as the third longest, as “Chapter Nine: The Piggyback” — the season four finale — is about two and a half hours long. That's 150 minutes. It's by far the longest episode, with the previous record being a cool 100 minutes.

In fact, “Chapter Nine: The Piggyback” is longer than many movies. Except for Stranger Things 4, it's one of nine episodes. Stranger Things creators The Duffer Brothers — that's Matt and Ross Duffer — handle writing and directing duties on the two-part Stranger Things 4 Volume 2. No new cast members are expected, but you never know.

When: July 8
Where: Amazon Prime Video

It's in Nagesh Kukunoor's hands. Not only is the Hyderabad Blues director the showrunner on this Telugu-language adaptation of the American rom-com anthology series drawn off The New York Times column “Modern Love”, he is also the director on half its run. Uday Gurrala (Mail), Venkatesh Maha (C/o Kancharapalem), and former production designer and executive producer Devika Bahudhanam handle the other three.

Aadhi Pinisetty, Nithya Menen, Ritu Varma, Suhasini Maniratnam, Revathy, Naresh, Malavika Nair, Abijeet Duddala, Naresh Agastya, Komalee Prasad, and Ulka Gupta lead the ensemble cast that will be divided up across its six episodes. Just like on Modern Love Mumbai. Speaking of its Hindi-language predecessor, Modern Love Hyderabad has its work cut out for itself, given the critical panning handed out to Modern Love Mumbai.

When: July 12
Where: Netflix

“I'm not your friend. And if you get greedy and decide to come back for more, don't.” That's all we've gotten yet from AMC — less a teaser, and more an audio clip — regarding the six-episode second half to the sixth and final season for the Breaking Bad spin-off.

Speaking of Breaking Bad, Bryan Cranston's Walter White and Aaron Paul's Jesse Pinkman are set to return, as has been known since before the start of Better Call Saul season 6. Given they didn't appear in Part 1, expect them anytime now. Carol Burnett also has a role.

When: July 13 (expected)
Where: Disney+ Hotstar

Colin Robinson (Mark Proksch) is still a baby at the start of the fourth season of this vampire mockumentary, and it seems Laszlo (Matt Berry) has decided to raise him. Laszlo's lover Nadja (Natasia Demetriou), meanwhile, is interested in opening a (new) vampire nightclub. And oh, the other vampires — and Guillermo (Harvey Guillén) — are dealing with the renovation of their Staten Island mansion.

When: July 14
Where: Netflix

As if the Resident Evil timeline wasn't already confusing enough — six Milla Jovovich-led films between 2002 and 2016, before a forgotten reboot last year, in addition to an anime series on Netflix itself — we're now getting another live-action Resident Evil project. For what it's worth, this one bears no connection to any of them, so this could be a good entry point.

Netflix's Resident Evil is set in the year 2036, 14 years after a viral outbreak caused a global apocalypse, where 15 million refugees try to survive amongst six billion human victims. It will also make heavy use of flashbacks to 2022, showing us how the world ended through the lens of 14-year-old twins who realise their father is hiding something.

Of course, the bigger question is whether it will end up being any good. Those seven movies have largely been terrible — and while the reboot also tanked at the box office, those before it at least could claim their commercial reception improved as the six-film series went on.

Lance Reddick (John Wick) and Ella Balinska (Charlie's Angels) headline the cast. All eight episodes of Netflix's Resident Evil will be available at once.

When: July 15
Where: Disney+ Hotstar

Hotstar Specials is here to add to the “patriotic” thrillers that have been cropping up for years now. After an enemy attack deep into India's borders leaves over a dozen dead, the powers that-be task the armed forces to prepare a paramilitary unit that would act as like “first responders”. I think someone needs to remind these guys what the term first responders means.

Anyway, enter in the Hawks, with Makarand Deshpande bringing together the best of the best from the Army, Navy, and Air Force. Regina Cassandra, Armaan Ralhan, Aadil Khan, Abhishek Saha, Anjali Barot, Kuldeep Sareen, Arif Zakaria, and Faisal Rashid play the elite individuals. Naturally, these guys butt their heads over principles, bravado, and what not.

Don't expect anything on the level of Top Gun: Maverick though, with the Shoorveer trailer indicating very little use of practical effects. And in what now feels like a tradition with Indian productions, the CGI is majorly unconvincing. It seems to me the budget for CGI was less than the cost of a Redmi phone.

Samar Khan (The Test Case) is the creator and showrunner on Shoorveer, with Kanishk Varma (Sanak) handling directing duties. All Shoorveer episodes will fly in at once.

Watch the Official Trailer for Shoorveer

When: July 29
Where: Netflix

In the second season of the semi-autobiographical comedy-drama, the mother-daughter duo is going to be braver and courageous. Or so Masaba has claimed in an interview anyway: “As women, we are told to be modest, that we should be quiet and that we should let people appreciate us. I don't agree. Nobody is going to do that for you. It's a job you have to do yourself. You have to go out and ask for what you deserve and make sure you get it.”

Not much else is known about Masaba Masaba season 2. The release date announcement video — that also serves as a 19-second first look, see below — shows an anxious Masaba staring at a pregnancy test, while her mother anxiously waits outside the bathroom stall.

Behind the scenes, Sonam Nair returns as director, having helmed all six half-hour season 1 episodes.