Kratos and Atreus are coming to PC after more than four years. 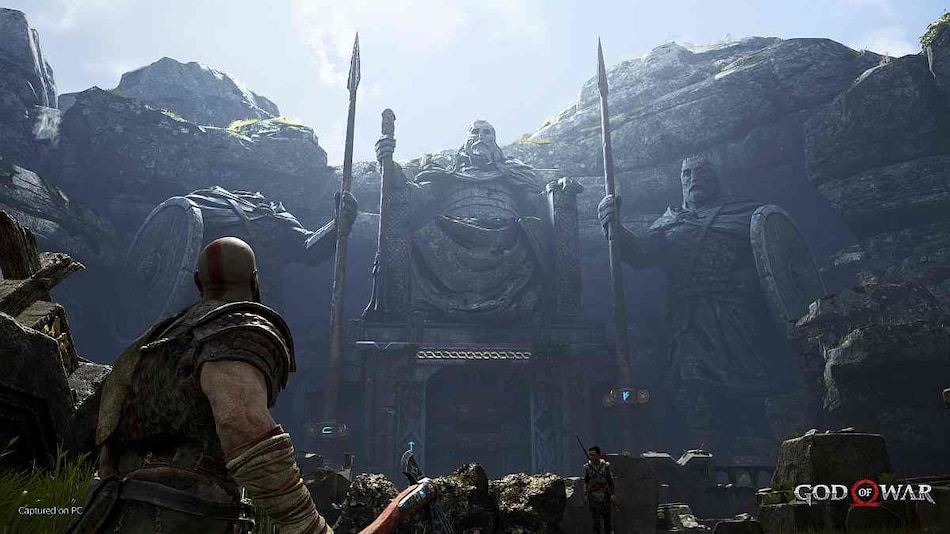 God of War PC edition is set to launch on Friday, bringing Sony's popular 2018 RPG game to PC gamers after nearly four years. God of War sold over 19.5 million copies as a multi-year PlayStation exclusive, and PC gamers will soon be able to purchase the popular title on Steam and the Epic Games Store. Just like the PlayStation 5 version of the game, the PC version of God of War will also come with support for 4K at 60fps. This will allow PC gamers to run God of War locally on their hardware, instead of on PlayStation Now, when the game arrives later this week. Meanwhile, fans are still waiting for PC ports of popular titles like Bloodborne and The Last of Us Part II.

Years after Kratos faced off with the Gods of Olympus, he must now fight for survival with his son Atreus in God of War. Instead of the bright, majestic Olympus from the older God of War games, players will be plunged into Norse forests that feature monsters and creatures like ogres, draugrs, revenants, reavers, and elves. The game also features even more action with an over-the-shoulder camera (that never cuts away, making God of War seem like a one-shot movie. Meanwhile, Kratos gets a new primary weapon — the Leviathan Axe.

Gamers who have tried their hand at God of War on the PlayStation 5 will now be able to look forward to 4K at 60fps gameplay on their PCs
Photo Credit: Santa Monica Studio

For gamers who haven't heard of or tried their hands at the popular 2018 title, God of War swaps its iconic Greek mythology for Norse mythology, as popular protagonist Kratos and Atreus travel across the realms to scatter his deceased wife's ashes from the highest mountains in all realms, including Midgard, where much of the game's story takes place. Atreus will also complement Kratos' battle skills with his bow and arrow — and has the ability to summon forest spirits. The 2018 title allowed users to travel across realms (except Asgard, Svartalfheim, and Vanaheim) via runes while playing the game.

From God of War Ragnarök to Starfield: 45 Most Anticipated Games of 2022

With that, here's everything you need to know about God of War as it arrives on PC.

God of War PC edition is scheduled to release on Friday, January 14. The game will be available on both the Epic Games Store and Steam.

God of War PC edition is priced at Rs. 3,299 and will be available for purchase via the Epic Games Store and on Steam.

As previously mentioned, gamers will be able to play the new God of War PC edition at 4K at 60fps with support for unlocked frame rates and special visual enhancements and graphical optimisations. However, gamers who do not have the latest gaming PC or gaming laptop specifications may not have to spend too much on upgrades to play the game, as it will come with up to five game settings (including support for 720p/ 30fps) according to Sony. Here are the minimum and recommended specifications necessary to play God of War on PC.

Sony recently confirmed that God of War will come with accessibility features such as Auto Sprint, Auto Sprint Delay, and Always-on Reticle. Additionally, gamers will be able to remap keyboard and mouse controls. God of War developer Santa Monica Studio's senior community manager Gracy Orlady said:
“Our primary goal when bringing God of War to PC was to highlight the exceptional content the team created and leverage the powerful hardware that the platform offers to create a uniquely breathtaking and high-performance version of the game.”

God of War for PC will be released along with accessibility features such as Auto Sprint, Auto Sprint Delay, and Always-on Reticle
Photo Credit: Santa Monica Studio

We had reviewed God of War back in 2018, when it was released for PlayStation 4 consoles. In our review, we noted that God of War brought a fresh new narrative to the game, minus Kratos' genocidal rage. We also noted that the game offered an interesting story, along with ferocious bouts of action, exploration, and puzzle-solving that is popular among fans of the franchise.

God of War was also one of our favourite games of 2018.

The game received an OpenCritic rating of “Mighty” back in 2018, with a top critic average rating of 95 thanks to 98 percent of critics recommending the game. The Gadgets 360 review of God of War is part of the OpenCritic score.

On Metacritic, God of War received a score of 94, with universal acclaim based on 118 positive critic reviews and no mixed or negative reviews.

Back in December, Sony and Santa Monica Studio released the trailer for the PC port of God of War. The trailer was essentially a showcase for all of the features coming to the game including the Nvidia Reflex support, as well as support for gaming at 4K resolution with unlocked framerate. The trailer reveals stunning visuals of the game from incredibly detailed interiors and the open Norse forests. Gamers can also catch a glimpse of Kratos' new weapon and the game's physics, as well as previews of battles with various creatures and monsters in the game.

God of War: Ragnarök, the final title in the Norse mythology series of the popular RPG game, will arrive on PlayStation 5 and PlayStation 4 consoles later this year after delays, partly due to the novel coronavirus pandemic.

But for now, there's no word on whether the upcoming God of War: Ragnarok will come to PCs in the future. So gamers will have to make do with the riveting campaign in God of War for PC, until Sony makes an official announcement.

Last year, Sony confirmed that it had acquired Nixxes Software, a studio that was dedicated to porting console games to PC, as part of the company's efforts to bring more PlayStation games to PC gamers. The popular game studio has brought games like Shadow of the Tomb Raider, Deus Ex: Mankind Divided, and Marvel's Avengers to the PC and fans can expect to see even more games arrive this year, including Uncharted 4.

PlayStation Studios head Herman Hulst recently confirmed that more PC ports of popular PlayStation games were coming, but gamers will still have to wait for a while before they get access to their favourite titles. The company released Days Gone on PC in May 2021, around two years after the game was launched for the company's consoles.